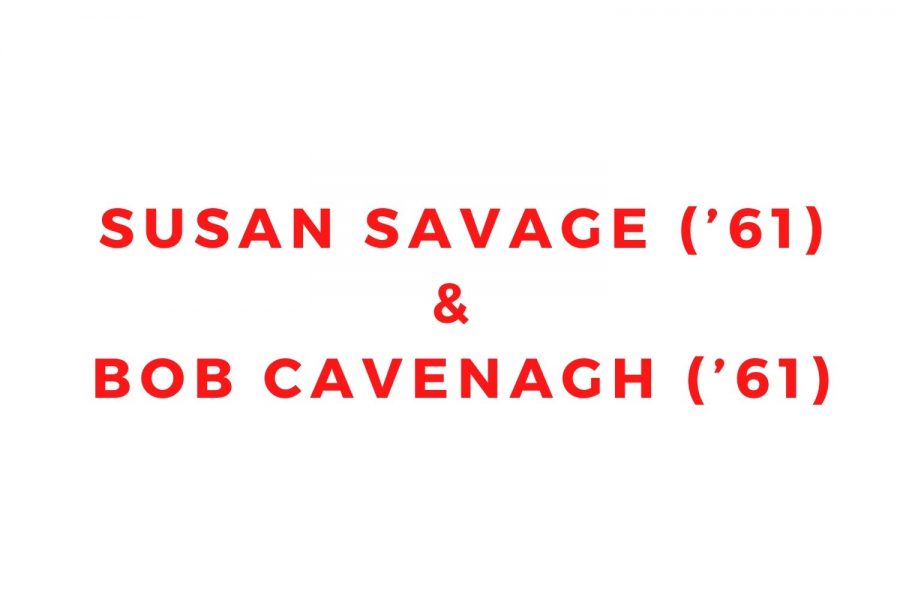 Susan Savage (’61) and Bob Cavenagh (’61) met at ASL in Grade 11 when Susan tripped over Bob in algebra class. Bob claims that she fell for him. At the time, the school’s campus was on Gloucester Gate and their grade consisted of around 18 students. On their first Valentine’s Day, Bob knocked on Susan’s door to give her a red tulip that he picked out of a yard. They have lived in Carlisle, Pennsylvania since 1972, and have three children and six grandchildren. They remember high school at ASL as a “less complicated time.”

What is the story of you two meeting?

Bob: All the guys were sitting in the back row with their legs straight out in front of them. She tripped over me. She fell for me.

S: I fell for him. I supposedly had to walk over his legs. Why would I have done that? I’m a pretty assertive person now, but in 1959, I was not and for me to go across a bunch of young men’s legs that I didn’t know, I thought was odd.

What did the two of you have in common that was evident from when you first met?

S: We just had some sort of attraction. We’ve been married 56 years so it’s about 60 years that we’ve known each other. My husband has a great sense of humor. He’s not boring. I can be a great cook and we love to entertain.

What was it like at ASL when you attended?

B: At that time, the school was housed in two old houses that faced Regent’s Park. The Lower School was in one house and the Upper School was in another house. Our classrooms were all bedrooms in the house. I guess if we had 13 students in most of those classes, those rooms would have been pretty crowded. We took a single curriculum, except some people might have taken Latin instead of French. So we were pretty much in every class together.

Right: Susan Cavenagh (’61) and Bob Cavenagh (’61) together at a restaurant in Carlisle, Pennsylvania. They reconnected after high school on a ship to the U.S.

S: And extracurriculars were small. I played on the baseball team and if you know me, it is kind of hilarious. Bob I think was on the basketball team because everybody had to do everything; there weren’t that many of us.

B: I also played football. It was tag football. Our athletic facilities were walking across the street into Regent’s Park. That was it.

S: And then the other thing that people used to do was walk into Camden Town at lunchtime and go to pubs. There was this famous Ms. Eileen King who brewed soup for us because we all brought our own lunches. This was not a fancy situation at all. I think we probably paid for it. We all brought sandwiches, but she brought the soup. The lunch room had very basic cement floors, cafeteria tables and small folding rooms. And then the benches were benches. I mean, it was really rustic.

S: We grew up in a much more basic time when there weren’t so many worries that kids have nowadays. You never worried about safety.

B: I remember I was given an allowance, and that was very kind of my father. It was a generous allowance. He gave me £5 or £2 a week. On £2 a week, we could go to commercial movies, go out and have coffee and french fries, take a taxi home and do the same thing the next night. Things were relatively inexpensive and there were working people in England who didn’t make any more than my allowance. Economics were very different.

We would go to movies down in Leicester Square and we would end up in coffee bars or pubs. ”

B: She had not married. The rumor was that her paramour had been killed in the war and she had never found someone else. She was sort of blonde and to us seemed ancient. When we weren’t in class, the cigarette smoke would go right up in front of her hair and she had a yellow streak.

S: We were convinced it was a tobacco streak. Anyhow, she was fearsome and people were terrified of her, but I think she made us better writers.

B: She straightened out your life a little bit if you gave her half a chance to. She demanded performance.

S: And we had an annual declamation contest.

B: We had to memorize a poem and then recite it from memory. She made us do that every year and that was horrible.

B: Schools today like ASL have a much more intellectually focused concept of how they need to serve the students. And we depended a little bit more on the luck of the draw for who the teachers were rather than any coherent planning. But the draw had worked rather well, we had good people. We didn’t get folks who were trained particularly to teach or who talked a lot about the teaching process, they just got there and they did it.

S: It was love at first sight.

Where was your first date?

S: Our first date was at the old American Embassy.

B: There was an American Embassy on the east side of Grosvenor Square and they had free movies every Friday night.

S: I met Bob there and we sat in the back of the room holding hands.

We started dating junior year and then I left. We stayed in touch by mail because a phone call from the U.S. to London was £10 for three minutes. At that time, £10 were bigger pounds than they are today and so we didn’t phone very often.”

How did you spend your first Valentine’s Day together?

S: I think the first one might have been when he stole a red tulip from somebody’s yard and brought it to me. I’m pretty sure I’m right on that one. I don’t know how, probably somebody with a little fence. And he just pulled it out and appeared at my front door. That’s all I remember. I’m sure there was more to it than that. Valentine’s Day was not the hot thing it is now.

What was your favorite high school date spot?

S: We would go to movies down in Leicester Square and we would end up in coffee bars or pubs. Sometimes we would go as a group.

B: A few of the seniors and juniors our year had cars and that was always an asset.

S: We would do picnics and one thing we did is we went to Princess Margaret’s wedding. We took blankets and digestive biscuits and sat and waited for the procession. Bob got a picture of the carriage coming by with Princess Margaret in it. We did not really go to the actual wedding, but we thought we did and it was very cool. My parents thought I was spending the night with my friend and Bob’s parents thought he was spending a night with another friend, but we had a good time out on the lawn. We had guitars, it was very tame, but it was lots of fun.

One of the things that you should look for in a relationship is friendship. I think everybody is too worried about, “oh my gosh is this the love of my life?” And yes it can be, but I think that friendship is important too. ”

How did you reconnect after high school?

B: We started dating junior year and then I left. We stayed in touch by mail because a phone call from the U.S. to London was £10 for three minutes. At that time, £10 were bigger pounds than they are today and so we didn’t phone very often. I went off to college and she went for a term to Queens College in London. And then when Susan came back, I met her on a ship. We didn’t fly back then, it was not yet common. We went back and forth by ship.

S: We were married on January 2, 1965 at the Navy Chapel on Nebraska Avenue in Washington D.C. It is where the vice president lives. I remember that my mother was very unhappy at the rehearsal. The doors squeaked so she had somebody come in and oil the door. Admiral Garrett agreed to perform the ceremony at our wedding which I thought was very cool. He also baptized our first child, our daughter, about eighteen months later.

S: I think one of the things that you should look for in a relationship is friendship. I think everybody is too worried about, “oh my gosh is this the love of my life?” And yes it can be, but I think that friendship is important too.

One of the things that was characteristic of the kids at ASL, and I think is probably true today, is that we had opportunities to be a little more cosmopolitan in our lives than people in the U.S.”

How has ASL shaped your lives today?

S: Well, it was important for me because I got to meet Bob. My mother and father could have sent me anywhere. There was another school that had a lot of the American Military Air Force students, and I could have gone there for nothing. My mother and father decided that my sister and I would be better off at the American school which was not horrendously expensive, but a little bit. My father was not a wealthy man and they decided that they would send me there. Thank goodness, because I got to meet Bob.

B: You know, one of the things that I think is not just ASL, but the way our lives work out, is that we have both lived in a number of places by the time we got to London. One of the things that was characteristic of the kids at ASL, and I think is probably true today, is that we had opportunities to be a little more cosmopolitan in our lives than people in the U.S. Although we weren’t traveling in the fanciest cities, we sampled a lot of different cultures, lived within them and we got to know them. I’m sure that’s true with much of ASL today.