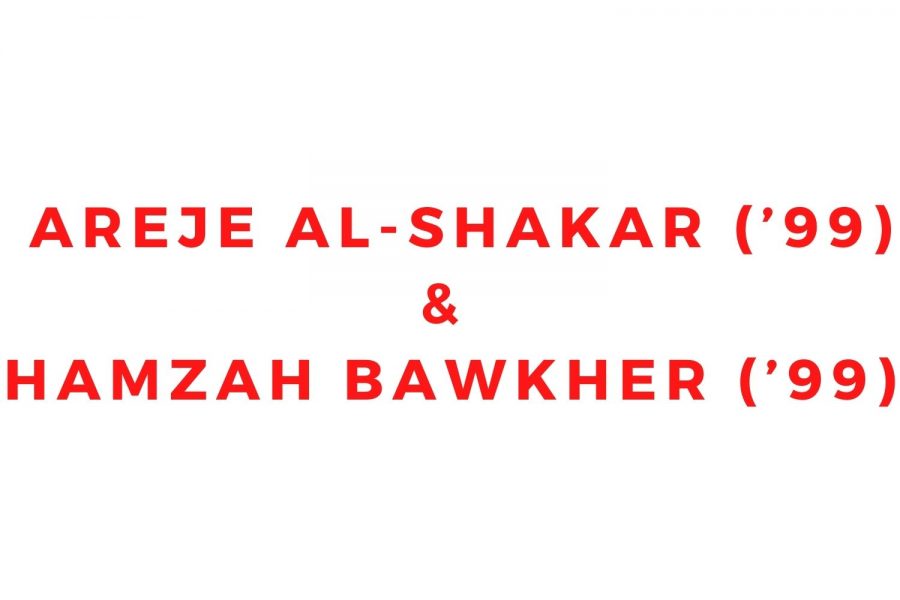 Areje Al-Shakar (’99) and Hamzah Bawkher’s (’99) relationship blossomed from their shared experiences not only at ASL, but also through their third culturedness – they were both raised in a culture other than their parents’ and countries of nationality. While they did not date at ASL, Facebook reconnected them in 2010 when they discovered they were both in Abu Dhabi at the same time. From there, they began to connect on a deeper level. They are now living in Bahrain and hope that when they have kids, they will be able to give them the same education experience that they had at ASL.

Hamzah: In Grade 4 we both joined ASL. So, in 1990 Areje was in Mr. Floyd’s class and I was in Ms. Widdies’ class and we swapped over for math and English. I knew who she was. I think back then, the boys stayed with the boys and the girls stayed with the girls. There wasn’t that much intermixing at that age.

Areje: I remember Hamzah because he is a twin, so during those years twins were more of a rarity. Him and his sister, everybody knew that they were twins.

H: The following year in Grade 5, we were in the same homeroom and our teacher was Mr. Baldock. I knew she was a smart person. She used to get 100% on every test. In Grade 6, my homeroom teacher was Ms. Simpson and she showed this report from a girl in another classroom about Egypt and the penmanship was perfect. The illustrations were perfect and it had a big A+ on the front. I remember looking at it and thinking, “oh my goodness, mine doesn’t look like that,” and it was actually Areje’s paper.

A: After ASL, I left London and he left London. I was in Bahrain, so what reconnected us actually was Facebook. I would see Hamzah’s pictures and updates and I would like them and comment on them. It was just really nice to see how everybody from ASL was doing. The next time I saw Hamzah was in 2010 which was the first time I saw him since 1995. It was kind of an ironic situation, but Hamzah was visiting his uncle who at that time was living in Bahrain, so I got to meet Hamzah at my office for 10 minutes. Hamzah and I were meant to meet again the next day for dinner, but he had something else he needed to do. So we just had that brief interaction and then we exchanged a few messages online. To be honest, I never thought Hamzah was really interested in me. I always found him to be a really nice guy and thought that he was attractive, but I didn’t go there.

But in 2016, when he said he was in the desert, I also happened to be in Abu Dhabi and we went out for a coffee just to catch up. It was just so easy to talk to each other and bring up topics. The common thing that we actually shared was our ASL time and I think it really creates this foundation. Even though we didn’t have the same friends, it was just easy for us to build that bond. What created our marriage was that it was a foundation of a friendship first and then it evolved.

H: A third culture kid is somebody who has spent their former years in a culture that is not their own. It changes you. One of the reasons Areje and I could hit it off so well is because I got the feeling that a lot of the people she grew up with once she moved back to Bahrain, weren’t very third culture. For me as well. So her and I were both third culture kids and that kind of gave us a perspective of looking at the world through a different point of view.

What was your first impression of each other once you reconnected?

A: At ASL, my impression of Hamzah was “oh, it’s so cool that they are like twins” and those were my thoughts around him and his sister. I remember very clearly one of my memories of Hamzah was at Ramadan. We are both from Muslim families so during the holy month of Ramadan we would be fasting, so there would be a bunch of us kids like from our grade that would sit together in the corner of the cafeteria because we wouldn’t be eating. Then in PE I remember the teacher would let us not do the mile run or anything that would cause us to get thirsty.

When I first saw him, my first impression of him was that I thought he was very articulate. I enjoyed his conversation and it was supposed to just be coffee but then it went “ok do you want to grab dinner” and I didn’t mind it. It was the first time that I felt very comfortable. I met him without having any expectations because I had this pretense that obviously he is a good-looking guy. He is in his 30s. And so from that it was a nice surprise to see that there was an interest for him to keep in touch with me.

In Grade 5, we were in the same homeroom and our teacher was Mr. Baldock. I knew she was a smart person. She used to get 100% on every test. ”

Funnily enough, I really did not expect this to become a romantic thing because I was very transparent with him because he actually asked me during our coffee “how come you are not married?” and I didn’t take offense to it. I was just like “oh, he is just a friend asking me.”

Can you describe your proposal?

H: I proposed to her just a bit old-fashioned, it’s what the guys in movies do. Bahrain is a small island and it is a flat island so there are not many places you can do it, but we did it on the balcony of the swimming pool area in my apartment building. I just got down on one knee and asked her. I was pretty sure she was going to say yes. I didn’t spring it on her because I am a very cautious person, so if there was a 50% chance of her saying no, I probably wouldn’t do it.

A: And he didn’t propose to me with a ring. He proposed to me with a bracelet. It was funny because I remember in the days we were getting to know each other, I remember telling him about some of my history with people who I almost got engaged with. One of the stories he remembered very well is when I was much younger I almost got engaged, and this guy that I almost got engaged to kept complaining that I have really thin fingers and that I don’t have the standard ring size. I remember telling Hamzah the story because I said I was so embarrassed, because it was supposed to be the happiest moment of my life and my soon-to-have-been- fiance was complaining that I have fingers that are thin. That stuck in his mind, so he got me a bracelet.

H: It was in a very nice hall at the Four Seasons here in Bahrain, and it was a really beautiful room filled with close family members and a few of my friends from different parts of my life, including ASL. To think about it, it was a surreal day.

A: I think for me what was really intimate was the religious ceremony which actually was perfect in terms of number of people and size because it was outdoors in the garden. I had always wanted to have an outdoor wedding but I live on an island where the temperature is really hot so we only have a few months in the year where you can actually do anything outdoor. We wanted the date to be significant and April 20 ended up becoming a very significant date for us, because in 2010 when Hamzah was here and we met, it was April 20. Then when we had coffee again in Abu Dhabi, it was six years later on April 20. So I wanted April 20 to be the date where we signed everything. What was really nice is that we had a Muslim ceremony because both of our families are Muslim, so we agreed that this is what we wanted. We then planned for our wedding in August, and like Hamzah said, it was really nice because it was kind of like a reunion of a few of our very close friends.

A: I really think that you should enjoy high school, and it is great if you can date but I don’t think it is a be all and end all. There is so much pressure when you are there trying to find somebody, and I think that ultimately for your lifetime partner, I always think that you have time and it will happen when it will happen. Some people are lucky enough to find somebody as early as high school, some people find it like us. We met at 35 and got married at 36. Enjoy high school, do all the activities, focus on getting into the program you want to get into afterwards.

H: When you are in high school, you are quite young. You don’t know what you are made of just yet but I know quite a few people who were high school sweethearts and then are married today. Enjoy your friends, enjoy your school, enjoy London. Everything happens for a reason.