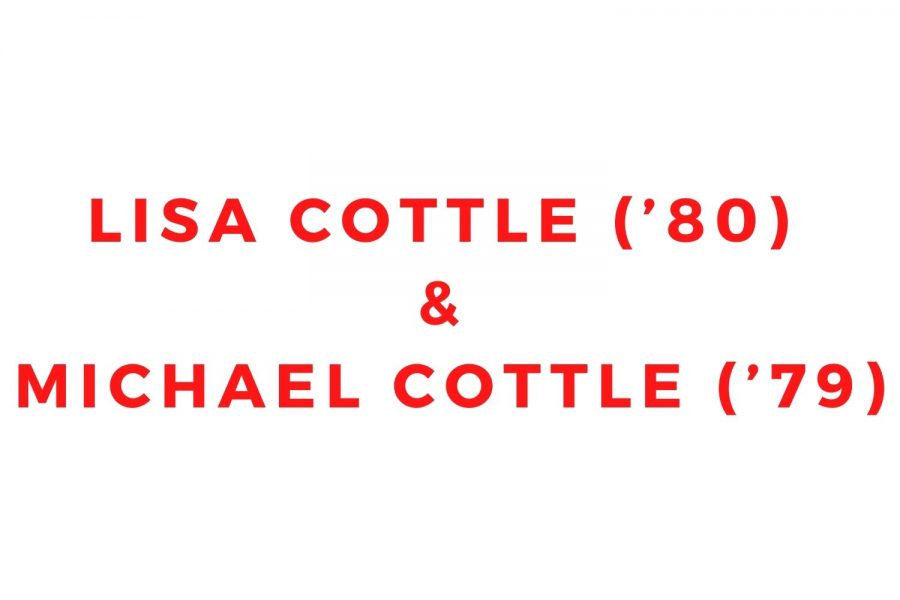 Lisa Cottle (’80) and Michael Cottle (’79) are inseparable. Even when their relationship adjourned after college, Lisa said she could not stop thinking about him. They parted their separate ways, got married, had kids and started living different lives. 20 years later when they found out they were both getting divorced, they found their way back to one another and in 2017 they tied the knot. Their ASL friends attended the wedding. They are now living in Estero, Florida with their combined families: five kids and three grandchildren.

L: Well we knew each other from school, but we started dating on one of our spring break trips. We went skiing to Switzerland and one of the nights we were there, we all went out for dinner to this little Swiss restaurant. There were probably 10 or 12 of us sitting around a big table and Michael was sitting right next to me.

M: I was at ASL from Grade 3 to Grade 11 and I graduated a year early so I was only there until junior year.

L: I was there for only two years from 1977-79 and in 1979 I moved back to the states with my family. We were dating at this point and Michael also moved back because he was starting college. I had one year of high school to finish in Pittsburgh and Michael started college at Hamilton College in upstate New York.

M: Lisa ended up going to SMU and so I transferred from Hamilton to the University of Dallas, which was nearby. So, for a while, we were in the same town and dating but we weren’t in the same school.

What was your first impression of one another?

M: I thought she was beautiful as she is now.

L: Michael had and still does have a great sense of humor. He jokes around a lot and he is really funny. I was attracted to that. He is also very kind, gentle and considerate.

What did the two of you have in common that was evident from from the very beginning?

M: So, I think it’s something that still exists today, which is this tremendous passion for travel and experiencing new things. I kind of feed off of Lisa’s energy. She’s always so enthusiastic about doing things. I love the fact that she pushes us to do things and I really like that opportunity to explore things together.

L: We have so much in common. We’re both very adventurous. We love food and wine and going out for dinner. We love going to the beach.

M: For instance, 20 years after we got back together, we both ran the Paris Marathon.

L: So we’re on the same page about everything. And that’s why we’re so compatible and so happy. I think it has never happened in our lives until now.

Did you date all throughout college?

M: No. After about six months of school, she dumped me and so that ended our first time together.

Did you reconnect after college?

M: Yes. Almost 20 years later we reconnected because we both were getting a separate divorce. I was living in California and she was in Chicago. We both had kids that were older. We were going to get back together and get married, but then we decided not to because we couldn’t leave each of our families.

L: I guess we just decided that Michael would have had to move from California to Chicago. It wasn’t going to be the best thing for his kids. So we decided not to go through with getting married at that time. This was probably in 2001, so 20 years after we’d been dating at ASL.

I never stopped thinking about him. I always knew somehow in my heart that we would end up being together. ”

M: And then 17 years later, we reconnected when our kids were older. They were out of the house and the timing was a lot better to get together. Lisa was living in California so it was very convenient. A year later we were married.

L: We’re definitely soulmates and we should have been together from day one. It just never happened. But now that it’s clear to everyone who knows us that it was meant to be. I think we always wanted to be with one another but after we split up and went our separate ways and got married and started having completely different lives, we didn’t want to interfere with each other. So we just didn’t contact each other but I never stopped thinking about him. I always knew somehow in my heart that we would end up being together.

M: I thought I’d be in a wheelchair by then.

L: I pictured us being together in our 80s or something. But thank goodness it happened sooner than that.

How has ASL shaped who you are today?

I was living in California and she was in Chicago. We both had kids that were older. We were going to get back together and get married, but then we decided not to because we couldn’t leave each of our families.”

M: I think it has allowed us to grow up faster than most high school kids. When we came back to go to college, our peers were like getting drunk and going crazy and we kind of already did that. I think we also got exposed to culture and travel that you typically wouldn’t know, if you were in some high school in the United States.

L: You’re surrounded by all your friends and everyone you know are from very diverse backgrounds. It’s made us just feel very comfortable and open with all different kinds of people no matter who they are and where they’re coming from. I think a lot of kids that grow up in the states in one little hometown their whole life don’t get exposed to that like we did.

And we have a lot of friends all over the world. I wouldn’t change it for anything. It was the best years of my life, living there and going to high school there and to this day London is our favorite city in the world.

What advice would you give to couples at ASL?

L: You need to share a lot of the same interests and enjoy doing things together. Also, realizing that you are two different people and you are not always going to agree on things. You are going to have differences and there are going to be arguments from time to time. But always be gentle and considerate of your partner.