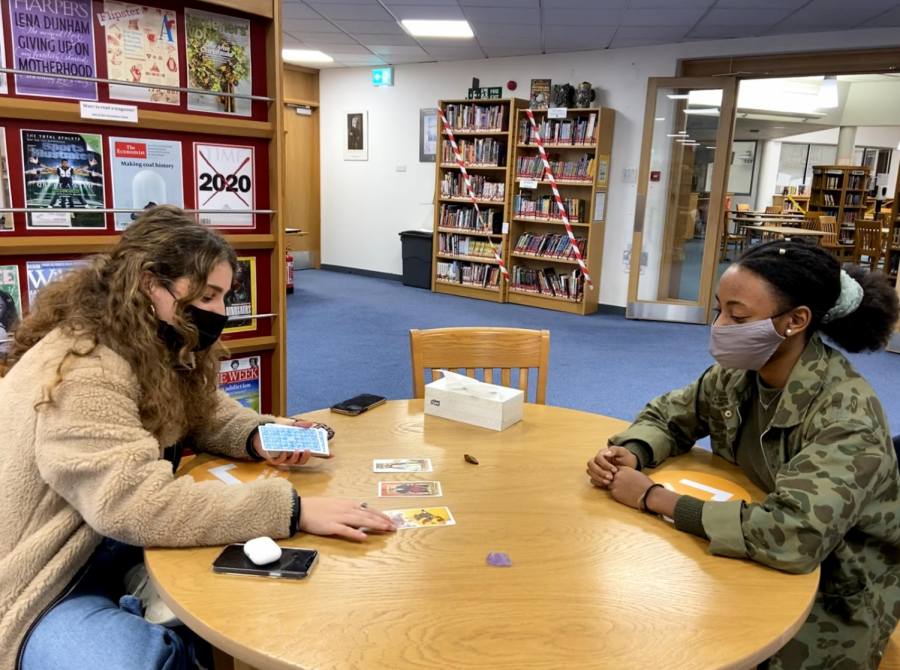 Micaella Lavi ('21) gives Olivia Benjamin-MacDonald ('21) a tarot reading in the Mellon Library. Lavi began teaching herself how to read tarot in November 2020 after being gifted a pack by a friend.

Across the High School, students and staff partake in alternative, or spiritual, hobbies and interests, which they incorporate into their daily lives. Spiritual passions come in a variety of forms, and each of them serve different purposes.

Administrative Assistant Shahira Moola began her business over 15 years ago, helping patients with energy healing, meditation, and living a healthy physical, emotional and mental lifestyle. She said her interest in spiritual practices was sparked by introductory courses in homeopathy in 2004 and Reiki healing (healing one’s energy) in 2005.

“Homeopathy is a natural system of medicine that uses substances, anything from an onion to tree bark,” she said. “It’s diluted down, which then helps to stimulate the immune system to have a natural healing response.”

Moola said the fact that her father is a doctor along with her interest in “alternative natural remedies” led her to Reiki healing.

“I was quite skeptical at the beginning, and then I started to realize they were working,” she said. “Ever since then, I’ve been really interested in anything alternative, really.”

However, Science Teacher Andrew Ringham said he doubts spirituality’s credence as it lacks scientific evidence but is open to the idea of homeopathy.

“We have had natural and homeopathic medicine for much longer than we’ve had scientific medicine in this world,” he said. “It’s entirely possible that some of the techniques, the historical ways of treating ailments and diseases have scientific underpinnings and actually did work.”

Though Moola said she had fewer clients in 2020 due to the pandemic, on the weekends she helps clients with their wellbeing through Reiki healing.

“It’s been proven that we have an energy field, when you get down to the basic kind of matter in people, it’s energy,” she said. “I’ve been attuned to channel the energy that’s around everything back to the body to rebalance itself.”

Though many would call these practices spiritual, Moola said spirituality is a spectrum, and different people may identify with the label differently.

“‘Spiritual’ is quite a loaded term,” she said. “It means different things to different people. We can all still have belief systems, like religious belief systems, but still be spiritual. I definitely identify with spiritualism as a concept.”

“I’ve always had religion, and I’ve always felt a bit of a disconnect, but I wouldn’t say I’m completely atheist,” she said. “I believe in having a sense of spirituality and a spiritual being that isn’t just humans, but at the same time I practice Judaism.”

Lavi said she is a self taught tarot reader, and she began reading in November after her friend gifted her a tarot deck for her 18th birthday.

“I find it really cool to read someone’s future and personality through some cards, and if not, it’s just a fun game to have around,” she said. “It’s just a fun ice breaker.”

Aside from tarot cards, Lavi said she is also interested in crystals and astrology.

Astrology and astronomy often overlap due to their connection with the stars. Ringham said his passion for astronomy has caused him to investigate astrology, and said the logic of it is flawed.

“22 hundred years or so ago, they thought where the sun was relative to the stars had some influence over your birth,” he said. “We now know that the sun is no longer there in reference to the same stars as it was.”

“We also know the stars we were comparing the position of the sun to are many, many lightyears away and there is literally no mechanism through which they can have a physical impact on you, your birth or your being.”

In addition, Ringham said the ancient purpose of astrology leads him to believe that it was used to exploit people who didn’t understand science.

“Stars were always used to signal some kind of message, warning or blessing from the gods,” he said. “Astrologers, like the great history of people who took advantage of others, knew they could make up stories and convince the local kings and earn a salary and power.”

Crystal healing, which was of interest to Lavi, is also performed by Moola. She said every crystal has a “certain resonance or vibration, and when you match the energy with a person, then it helps to create balance.”

Moola said though others may not believe crystals can have any effect on the body, there is scientific evidence that crystals may work. “They come from the earth, each one resonates at a different frequency, and that’s why they’re said to have certain properties to help you heal different aspects,” she said.

Oriana Natsis (’21) said astrology and crystals are interesting concepts, but is unsure if they “are a real thing” because she does not know enough about them. Nevertheless, she said she does not see a problem with people using crystals or astrology for personal reasons.

“Even if it’s a placebo effect, that’s very powerful,” she said. “And at the end of the day, if crystals are making you more concentrated and happier, or zodiacs make you more aware of yourself and your personality there’s no harm in that.”

Ringham also mentioned the power of the placebo effect when explaining why he believes people turn to homeopathy.

“There are probably positive anecdotal results that have come from it, but the placebo effect is real,” he said. “It is possible an individual receiving a homeopathic treatment and a non-medical treatment does actually experience a lessening of their symptoms, even though the treatment itself is completely medically ineffective.”

Instead of astrology and crystals, Natsis said she focuses on manifestation – using the power of one’s mind to get what they want – as well as meditation practices.

“If you’re thinking, ‘I want to get into university’ and you work hard, and you follow that, then you will get that because that’s what you’ve set your mind to achieve,” she said. “But meditation, which is also kind of scientifically proven, is a really good way to clear your mind.”

Natsis said she started regularly meditating during the first COVID-19 induced lockdown, which she said negatively impacted her mental health, so she could feel better emotionally.

“I was taking medication and doing therapies, but that wasn’t really a helpful process for me,” she said. “I started branching out and trying to find other ways for myself, and everyone always tells you to meditate. So I did a little bit of that and started doing my own research and, as cheesy as it sounds, discover who I am.”

Like Natsis, Moola said she meditates and uses other mindfulness practices which ultimately benefit her.

“I meditate every morning, I run healings on myself once a week, I practice yoga several times a week,” she said. “Those are the things to help me keep my energy at a good level to stay healthy and well.”

As a Reiki healer, Moola said it is important for her to “walk the talk” and use personal experience when treating her clients instead of regurgitating knowledge.

Natsis, Lavi and Moola said that people should be more open minded towards learning about spirituality and the various lifestyles and hobbies that come with it.

“Maybe it helps some people, maybe it doesn’t,” Moola said. “It’s not to take anything away from those who follow the medical model or anything like that. I think everybody’s different. We’re all individuals and different things work for different people.”