The man box implies a rigid set of expectations, perceptions and behaviors of what is “manly,” according to the University of Richmond.

Assistant Principal Natalie Jaworski said when a man does not conform to the confines of the box, others have a tendency to make fun of them.

“Anytime you’re outside the box, you’re in a position to be mocked or to be thought of as like, not enough of a man,” she said.

From the inside of the box, Gabi Dawson (’24) said people who align themselves with these societal norms often pull people back in.

“They don’t like people getting out of the box,” she said.

Eaton said one detriment of the box is that men are discouraged from engaging in “extraneous emotion” as they are the ones others traditionally depend upon. This, he said, has partially led to issues that disproportionately affect men, such as higher suicide and homelessness rates.

“I don’t necessarily see toxic masculinity as having necessarily caused all these things,” he said. “But I think there is a correlation.”

In addition, Social Studies Teacher Terry Gladis said the standards laid out in the man box have created social hierarchies which, for example, regard athletes as more manly, thus allocating them more social capital. He said, though, ASL has gone through an evolution on this practice.

[Click here to listen] “Holy moly, if you want to go back 15 years, without a doubt, there was, there was a huge status regarding athletes,” he said.

However, Papenhagen said male athletes remain socially respected more than students who participate in other activities. He said the starting five on the basketball team are held up above the students who are “kicking butt” on the robotics team.

“There are systems and traditions in place that almost emphasize the man box,” he said. 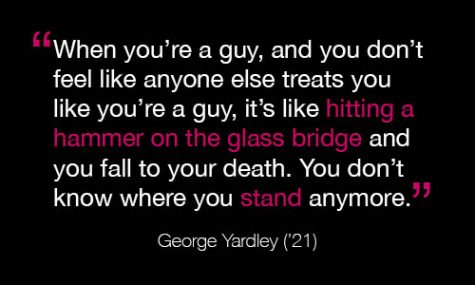 Furthermore, Linton said the sports aspect of the man box is still prevalent, which dictates that “guys have to play sports and be good at sports, follow sports to be masculine.”

George Yardley (’21) said everyone is standing on a metaphorical glass bridge; a metaphor which is particularly germane when applied to the toxic environment among men.

Ultimately, Gladis said often the man box not only forces societal norms, but obscures men’s views of their own masculinity as well. He paused, leaned forward and said, “Am I living in the box?”