Beyond the immediate consequences pack dynamics can have on men, Yardley said this mentality can have negative effects on women.

“When you take that psychological aspect of man and put it and pair it with this desire to prove yourself and be, be cool and be manly in front of a group of guys, what you get is some pretty demeaning and sexist conversation,” he said.

Even worse, Yardley said pack mentality can create an environment which encourages acting without consent.

Jaworksi referenced Primark shirts which, she said, reinforce these archaic gender roles. She said a blue shirt marketed to boys read on the front, “Line up ladies, there’s only one of me,” while the girl’s shirt read, “My daddy will never let me date.” Eyes wide, she emphasized the shirts were for 2-year-olds.

Jaworski said these shirts are evidence of how societal gender norms manifest, specifically in regard to a feeling of entitlement over women.

[Click here to listen] “For males, it’s already at 2 years old expecting sexual conquests, and like the number of partners that you would have would make you, like, stronger,” she said. “And then for girls, that not only should they never have sexual partners, but that their father is the person who is in control of them.”

[Click here to listen] “We often forget that we are animals just as much as any other animal is,” he said. “We have very survival-based chemical needs. And so for guys, sex is a necessity. Like, the same way we get hungry, we have sexual desire. There’s no difference between the two of them.” 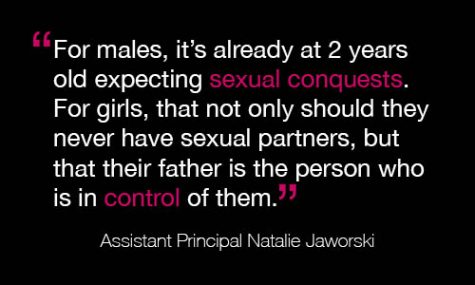 When it comes to breeding grounds for toxic masculinity, Yardley said the school’s Fitness Center is a prime example of how a pursuit of dominance can infect the atmosphere.

“Something just about the environment of the gym made me feel like I needed to exert my own presence and dominance,” he said. “Literally like tigers or lions fighting over the territory.”

One day a week at the Fitness Center was set aside for only women to work out, which Yardley said he believes was because toxic masculinity lent itself to an environment which can deter those who don’t conscribe to stereotypical masculine ideals.

Linton said, historically, there has been a superiority complex associated with men and women.

He said this complex plays into sexism because men feel like they have to act better than and downplay the achievements of women in order to make themselves feel more secure.

Following this complex, Jaworski said women in positions of power must prove their worth as toxic masculinity facilitates the limiting of women to less powerful roles.

She said one scenario that is ingrained in her memory is when she was social studies department head, and the team went on an after-hours tour of a museum. When they arrived, she approached the curator to introduce herself. The curator, a man, asked to speak to the head of the department. She responded “‘that’s me.’” In surprise, he said, “‘Oh, you’re their boss?’”

Jaworski said this experience was uncomfortable and embarrassing because the curator had immediately written her off as someone incapable of holding such a position. Although she was younger at the time, Jaworksi said she imagines if she had been a man of a similar age, the curator wouldn’t have responded in the same shocked fashion.

However, Jaworski said her colleagues seemed to recognize the sexist nature of the situation and acknowledged how toxic it was.