Over the past 10 years, Jaworski said she has realized how her upbringing set her on a path in line with society’s square gender ideals; she was raised in pink shirts and not blue ones.

Jaworski said “we still run up against our own biases, our own experience, our own toxic masculinity or femininity,” which makes people unsure about what to do with someone who isn’t “fitting our mold.”

Similarly, Dawson said some people are aware of how much toxicity they emanate, while others are in denial because they are uncomfortable self-criticizing. Gladis said this tendency is sometimes “systemic” at ASL, as toxicity is often excused, hence confrontation is not forced.

However, after years of reflection, Gladis said he can see how he has contributed to a toxically masculine environment. 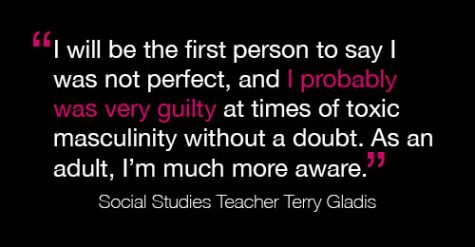 “I will be the first person to say I was not perfect, and I probably was very guilty at times of toxic masculinity without a doubt,” he said. “As an adult, I’m much more aware.”

Gladis said running up against the effects of his own toxic masculinity catalyzed a personal reckoning.

“I learned I was guilty,” he said, “And I feel terrible.”

Now that he has two daughters, Gladis said there’s more riding on his awareness; any toxic behavior he exhibited when he was younger cannot be represented in front of his children.

[Click here to listen] “I’m the only male in the household, and it’s important that I model what a man should be,” he said.

Instances of reflection like Gladis’ are few and far between according to Yardley. To stand up to toxic masculinity, he said men have to confront a series of obstacles first.

“The more pressure there is to be this type of strong, unemotional, steadfast man, the less and less they talk about these things,” he said. “So they’re totally internally unfamiliar with some of their own emotional struggles.”

Yardley said plenty of men wouldn’t feel comfortable sharing their experiences with toxic masculinity. He said “it’s not easy” to be so vulnerable, “it’s not easy at all.”

“There are probably hundreds of other stories,” he said.