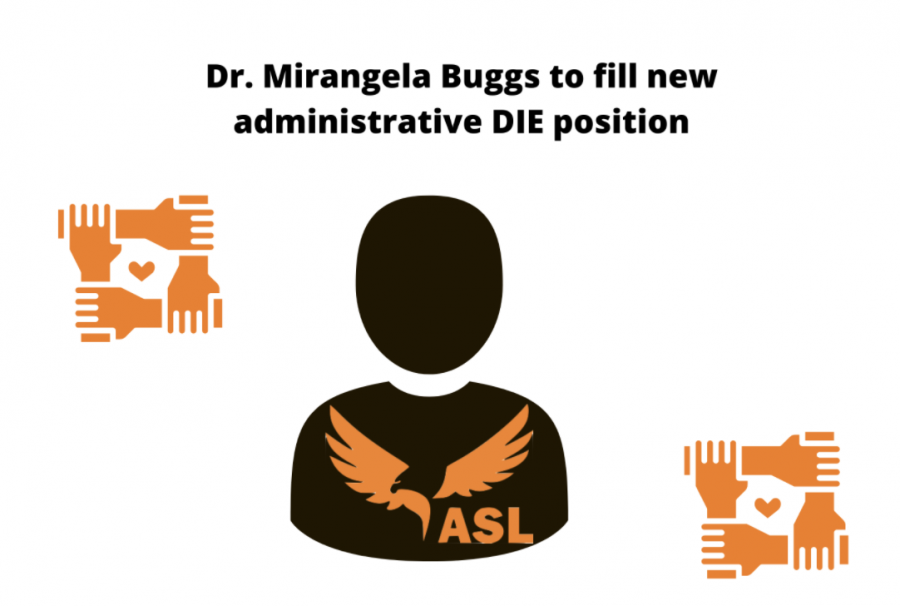 The new Director of Institutional Equity Dr. Mirangela Buggs was announced March 5. Buggs will begin July 1 as part of the school’s plan to manifest the Diversity, Equity and Inclusion Statement.

The school is introducing a new senior leadership role at the school, the Director of Institutional Equity, to work towards the goals highlighted in the Diversity, Equity and Inclusion Statement. The new DIE will be Dr. Mirangela Buggs as announced by Head of School Robin Appleby March 5. Buggs will join the Senior Leadership Team July 1.

Buggs currently serves as Director of Equity and Diversity engagement at the Dwight-Englewood School in New Jersey, a role she has held since 2017, Appleby said.

According to Appleby, the position will play an imperative role in making the school a more diverse and inclusive place.

A group of 11 students and two faculty members played a significant role in selecting Buggs, participating in the final round of interviews for the DIE. According to Appleby, the panel completed their final interviews of the three candidates Feb. 23. Following the interviews, the panel was given an opportunity to discuss each applicant and select their favorite candidate.

Overall, seven committees interviewed the finalists. These committees are composed of academic and operational leaders including faculty, staff, members of the Board of Trustees and parents, ultimately contributing to the hiring decision.

Appleby said she utilized the feedback from the 65 people involved in the interviews to choose Buggs.

“People recognized her as someone having very deep experience over a decade of doing the work, of being a school leader and doing DEI work,” she said. “They also felt that she was warm, accessible and approachable, and that they would really want to work with her.”

In addition, Appleby said it was imperative to involve students in the interview process.

“It’s very important to have student voices in this because a lot of this job is to make sure that the student experience is equitable,” she said. “We shared the open letter with the candidates that was written by members of the Social Justice Council, and so we really want student voices involved in helping the school to determine who is the right person to help all of us address what needs to be addressed to create a better environment.”

Eric Henrikson (’21), a member of the student panel, said that student input is crucial.

Victoria Figueroa (’22), another member of the student panel, said the student interview committee asked questions to the prospective candidates regarding community outreach, student representation and engagement.

Henrikson said that the new DIE position will have a profound impact at the school.

“The only way to really hone in diversity and inclusion and address it is by hiring someone specifically who can afford to spend all of their time devoted to changing these issues,” he said. “We can’t just set aside one advisory every few weeks to try and change this issue. It’s something that needs constant attention and that’s going to need constant attention if we actually do really want to change something.”

Henrikson also said while this position has the potential to make a large impact, it ultimately comes down to the student body’s willingness to participate.

Furthermore, Figueroa said it’s reassuring to hear the steps the school is taking to fulfil the vision of the Diversity, Equity and Inclusion Statement by hiring a professional.

“It was really inspiring to hear that they know how to handle these things,” she said. “A lot of the candidates are previous diversity directors and they know that it’s not as simple as taking case-by-case. Instead they have a vision, they have a plan, so it’s a bit more comforting to hear that.”

Ultimately, Appleby said the goal of this new role is to create tangible change.

“While we’ve always strived to do this we’re now ready to have someone come in and really spearhead and spend more time on these initiatives,” she said. “It’s really about creating systemic, long lasting change.”