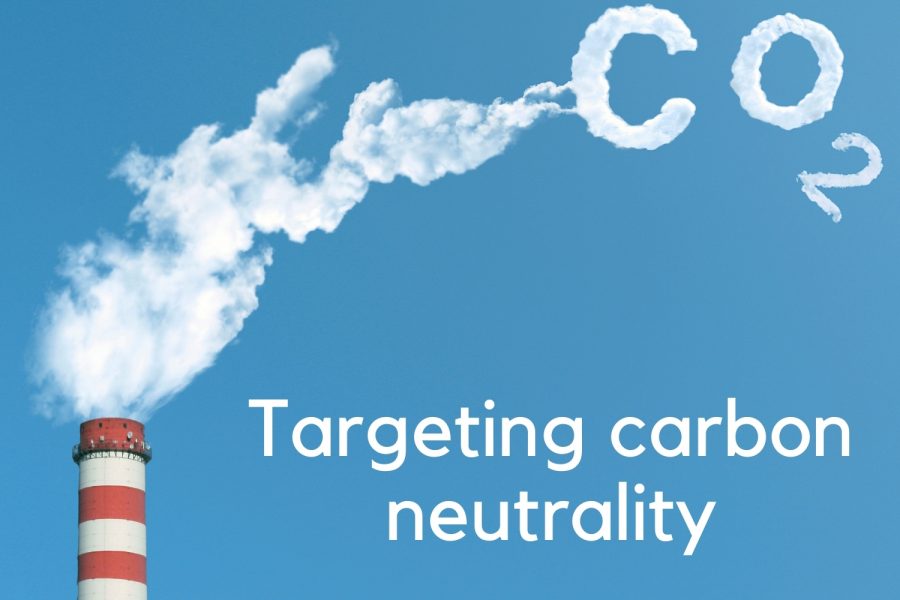 After a meeting between the Sustainability Council and members of the Board, the school is considering making its own commitment to reducing carbon emissions to net-zero. A survey conducted by SusCo indicates such a commitment has the backing of the High School community. (Photo used with permission from Tick-Tock/GettyImages)

Worldwide, countries and institutions continue to set goals to reduce carbon emissions. Likewise, the school has set out to potentially make its own commitment following campaigning from the Sustainability Council, per Board Trustee Daniel Hajjar.

Co-President of SusCo Cece Muecke (’21) said net-zero has been a long-time goal of the council. Taking preliminary steps to materialize this objective, SusCo arranged a meeting with the Board of Trustees Feb. 3, during which members introduced their proposal.

A net-zero commitment from the school would carry broad community backing. According to a survey conducted by SusCo with 318 responses, 80.8% of student and faculty members indicated they strongly agree or agree with supporting a carbon neutral commitment from the school. From Hajjar’s perspective, many on the Board are similarly willing to commit to carbon neutrality.

Muecke said using this data incentivized SusCo to meet with the Board.

Hajjar, who chairs the Buildings and Grounds Committee, attended the meeting. To him, SusCo’s proactivity represents the student body “reaching out to the board for assistance” on the road to net-zero.

In regard to the meeting, Hajjar said rather than paying needless attention to the question of feasibility, the two parties focused on what measures can be taken to practically reduce the school’s net emissions.

“The questions were all about ‘Well how can the board help you with your agenda?’” he said. “As opposed to, you know, ‘Gee, is this possible or is this not possible?’”

Director of Operations Jim Heynderickx said as of yet, it is not 100% clear if net-zero is a realistic possibility.

“It may be achievable, but it may not based on, you know, based on the research we have to do,” he said.

Similarly, while ready to embark on a path to net-zero, Hajjar said he foresees roadblocks.

“There are certain things within the fabric of the school that really will challenge us to hit net-zero without a whole series of offsets,” he said.

Hajjar said that the school remains in early stages of progressing toward net-zero. An important facet of that progression, he said, was continuing the conversations like the one the Board had with SusCo.

“We are quite frankly, maybe one step beyond the infancy of, of seeing the real engagement with what needs to happen,” he said.

After affirming net-zero as a collective goal, taking material steps to reduce emissions comes next –? some of which the school has already made.

Both Heynderickx and Hajjar said the process of moving away from natural gas and sourcing energy from newer technologies has been underway for some time.

Heynderickx mentioned two primary methods by which carbon emissions are being reduced on school property, both of which are ongoing processes. For one, he said the school is embarking on a six year process to replace all of the building’s fan coils, which work to heat and cool rooms. The old coils have been in place since 1971, and Heynderickx said the new model is two to three times more efficient. He credits this process as having the “biggest impact in years on how much electricity and how much natural gas the campus uses.”

Secondly, the lighting in the school is being overhauled, with old fluorescent tube lights making way for LED lighting systems.

Financially, according to Heynderickx, the long-term sustainability of these energy practices will likely pay back the cost of instituting them. In regard to LED lighting, the school will be saving on operating costs in three to five years’ time.

In the pursuit of net-zero, cutback measures extend beyond campus infrastructure. Heynderickx said one example is how the school has increasingly depended upon public transportation for off-campus trips rather than independently-contracted bussing.

In fact, buses themselves have been utilized as an emissions-reducing opportunity; all school buses now adhere to the most recent Euro 6 standards for carbon emissions, per Heynderickx.

Heynderickx said it is difficult to gauge where the school ranks in relation to the government’s quotas.

“A couple of years ago, there were very simple measures for measuring the carbon footprint for an organization or a building,” he said. “By those standards, you could say, ‘Oh, we’re way ahead of the curve.’”

However, Heynderickx said these standards failed to account for various factors, meaning ASL’s position might not corroborate with what the calculations point to.

Hajjar said the applications of net-zero work are not strictly environmental – they are also educational.

“We are in an environment within an educational institution that has the ability to begin using that as an educational tool … for the students to use to experiment with to, you know, really elevate the whole discussion, rather than someone saying, ‘Well you know we’ll put a bunch of solar panels on the roof,’” he said. “It goes much more beyond that.”