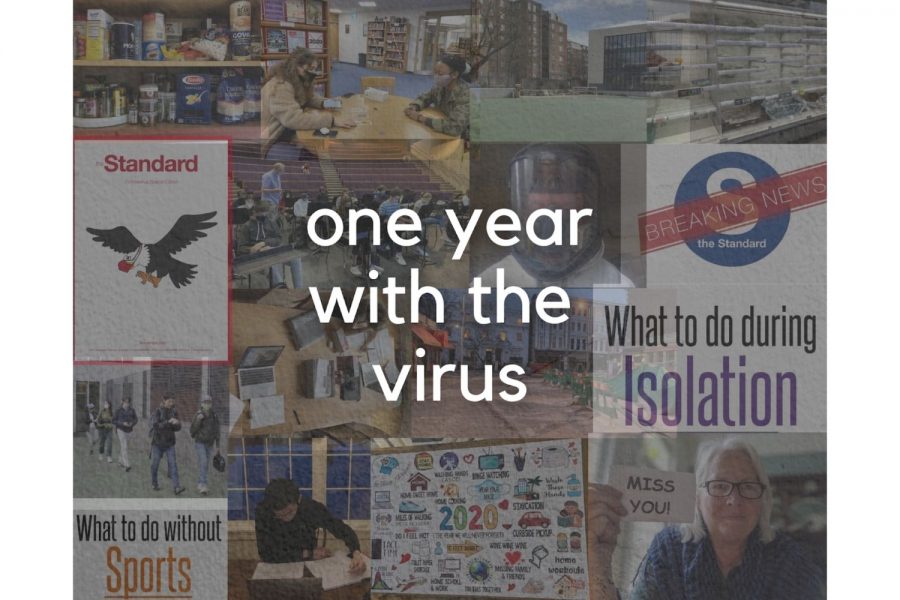 From the day campus closed on March 13, 2020, the last year has brought lockdowns, isolation, and millions of deaths. But, through the challenges of COVID-19, the ASL community reflected on the pandemic and the positive outcomes that have come to light.

Unprecedented: One year with the virus

From whipped coffee and TikTok dances to patchwork denim and Disney+, the last year has been a whirlwind of novel experiences. It’s been a whole year where it’s seemed as though the media just couldn’t escape using the term “unprecedented times.”

“This school year will probably be the one in my career that I remember as the year like no other,” Head of School Robin Appleby said.

Looking back on the decision to close campus, Appleby said the limited information known about the virus caused a somewhat rushed announcement.

“At that point, it was so early in the pandemic,” she said. If people knew then what is now known about the virus, that one case wasn’t necessarily going to lead to an enormous outbreak, Appleby said “we would have been less panicked.”

Many update emails informing the community of an extended closure followed the initial news March 14, 2020.

Ethan Snizek (’20) said the quick turnaround from normal life to lockdown was difficult to comprehend at the time.

This school year will probably be the one in my career that I remember as the year like no other.”

“It was almost scary watching it unfold,” he said. “All of a sudden, literally in the course of two, three weeks, it went from not even worrying about it, to ‘this could end up ruining the whole year.’ It was very, sort of, surreal.”

Although each new announcement only reflected the increasing cases and death rates throughout March and April, Math Teacher Peggy Stetsko said it still came as a surprise each time the date of return was extended.

“I had a hard time coming to terms with how long it was going to be,” she said. “I remember feeling really disheartened when people were like, ‘Oh, we might be able to go back to, you know, restaurants and stuff in the summer,’ and I remember thinking, ‘Summer? This is gonna go on for like, months? Are you crazy?'”

Stetsko said beginning the Distance Learning Plan for the first time in March was the equivalent of being completely new to teaching.

Much anticipation led up to the first day of DLP March 23, 2020. During the prior week of having no classes, students retrieved materials from school and teachers began the process of adapting all coursework to an online platform.

Stetsko said she was completely unfamiliar with the Zoom platform until the first week of online classes.

“I had never actually even used Zoom before,” she said. “This is my 14th year of teaching and it was like starting over.”

In light of the added challenge to adjust to a new platform, Appleby said she appreciated the adaptability of teachers to online teaching.

“People have had the opportunity to see that we can all be flexible, and we can all make choices that support one another’s health,” she said.

Knowing that trust was placed in families throughout the track-and-trace process, Appleby smiled while discussing the community’s honesty and dedication to safety.

“People just accepted it, they understood the necessity of it, they respected the fact that they had to help protect other people,” she said. “That gives me great confidence in this sort of humanity of all of the members of this community, and that there really has been an impulse to try to support one another.”

Appleby said The Standard’s online platform allowed for news updates that kept the community up to speed with recent announcements.

“Its turnover of news is much faster,” Appleby said. “People are really reading it and commenting on it. That makes all of the adults who are in leadership positions around here much more conscious of how students are going to think about crises.”

As a result of such frequent coverage, Appleby said she could anticipate receiving interview requests from The Standard staff after pressing “send” on an email update.

“I don’t think I’ve ever done so many interviews with high school and middle school newspapers,” she said.

Appleby said the presence of scholastic journalism at the school changed the way information was fed to the community.

“It’s impacted the detail with which we make the decisions and communicate it,” she said. “We know that if we don’t communicate enough detail, we’re immediately going to need to be asked for more.”

I don’t think I’ve ever done so many interviews with high school and middle school newspapers.”

Appleby said she even teamed up with one of the editors to further increase efficiency in relaying news to the community.

After the initial announcement of campus closure until April 17, 2020, The Standard published an article including quotes from Snizek.

In the article, Snizek said, “I’ve kind of been expecting this for a few weeks. It was getting more and more clear each day that this is becoming a bigger problem.”

Looking back on the spring, Snizek presently said he was unprepared for the long lasting effects of the virus.

“This is not something anyone has ever prepared for,” he said. “You don’t sit as a teenager in school thinking, ‘The world’s gonna almost be finished for no reason over a deadly disease.’ You know, you don’t think about that kind of stuff.”

In the article about the school closure, Snizek also discussed his perspective as a member of the graduating class of 2020.

“With being a senior there’s a lot of kind of rite-of-passage-things coming up in the next few months, a lot of good traditions that have been going on for years that we’re going to have to miss out on because of this virus,” he said. “As this is our last year, it is kind of disappointing.”

“One of the more positive aspects of our senior class was that people tended to have a good attitude about the whole situation, and we sort of made the most of it,” he said. “I don’t think I would go back in time and take back the end of senior year.”

Following Prime Minister Boris Johnson’s announcement of relaxed restrictions, The Standard published an article May 10, 2020. In this article, Connor Eaton (’21) said, “[The new measures don’t] really change much. It’s more symbolic. Mr. Johnson is essentially saying that we’re on the path to considering reopening with the step system. Because there’s not a stringent observation or enforcement of [the regulations].”

Reflecting on his comment about Johnson’s plan to reopen, Eaton presently said factors like the plummeting economy and potential seasonal changes impacted his prediction of the virus’ course.

“It was probably a little bit shortsighted of me, but I think it was probably a bit of cynicism last year, and a bit of optimism from that,” he said. “I didn’t believe the government was really going to go ahead with this continued stringent COVID policy.”

Last spring, articles were also submitted by guest writers, including an opinions piece by English Teacher Megan McGilchrist. Published March 26, 2020, “Quarantine Diary” compared McGilchrist’s knowledge of COVID-19 at that time to previous plagues and their depictions in literature. She said she was inspired to write the piece after teaching her Mythology class about the play Oedipus the King, a tragedy surrounding the Great Plague of Athens.

“I thought it would be interesting to write something about that because I thought it might make it a little bit less scary for all of you, if you were made aware of the fact that these things, they come around,” she said.

Now unable to come to school due to vulnerability, McGilchrist said the pandemic has given everyone a sense of hope that the state of the world can only improve from this point forward.

“It will give you a kind of perspective for the future, you know, anything else that happens, it won’t be as bad,” she said.

Outcomes of the virus

Throughout three national lockdowns and strict stay-at-home orders, students and teachers have discovered new passions and hobbies with the given time.

“There were so many negatives this year,” she said. “But, I think there are also so many positives. Spending time with family, learning new hobbies, being able to stay home and sort of do things there that you wouldn’t normally get to do.”

Although Stesko said activities she regularly attended before became more challenging, she started hobbies such as puzzle-building.

Similarly, Parkinson said she started to experiment with bread-making to pass the time, but she said “it didn’t really work out.”

Despite more time to delve into unknown interests, Stetsko said a lack of motivation led her to accomplish less than she wanted to in isolation.

“I thought for sure I would be like, ‘Oh, I’m gonna start playing the piano more again because I actually have time,’” she said. “I just find myself not motivated to do stuff because I just feel less energy all around.”

Parkinson said another outcome of spending more time at home is the opportunity to look back on what COVID-19 has taken away, and how this new gratitude will alter peoples’ return to normal life.

“This has prompted a lot of reflection on our part, to try and be appreciative of things we now can’t have,” she said.

After experiencing a truly once-in-a-lifetime phenomenon, Parkinson said she has felt a seismic shift in who she was in the weeks leading up to March 2020 compared to now.

“I’m still the same person at my core, but I think that there’s more reflection and more, sort of, perspective,” she said. “That changes everyone, and I think that that allows us to sort of gain a new perspective.”

365 days later, ASL still sits perched on 1 Waverley Place. On that day in March, few could predict what was to come; three national lockdowns, millions of deaths and months spent on Zoom.

But despite the challenges faced in the last year, Appleby said the school has emerged with a strength unlike before.

“I really admire how well people have handled incredibly difficult times,” she said. “It’s brought out the best in people, rather than the worst in this community. And that’s been really lovely to see.”