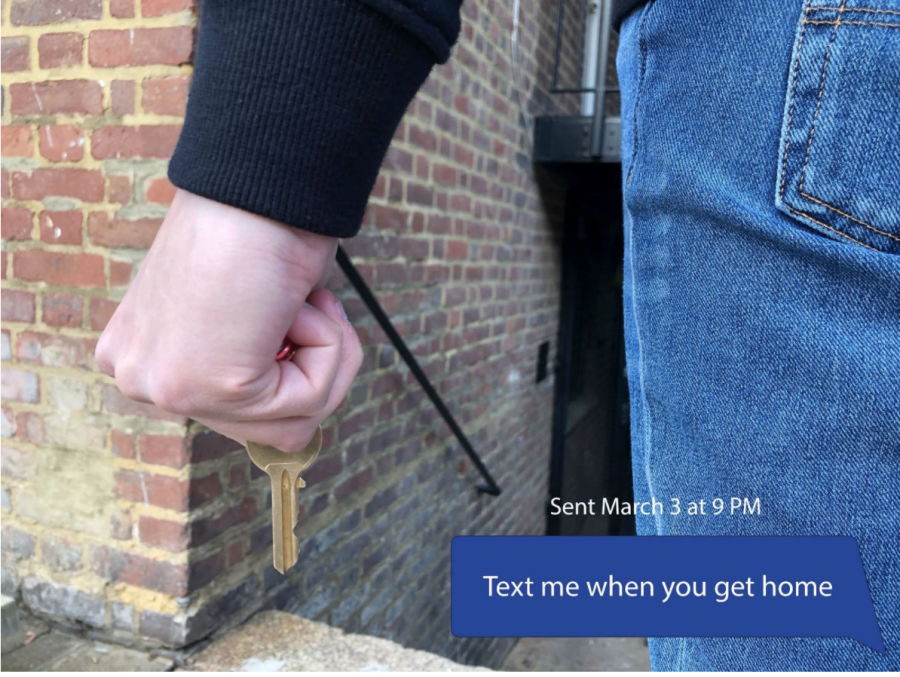 After the murder of Sarah Everard and recently surveyed statistic about sexual harassment was released, female students are more concerned for their safety on the street. A commonly suggested method for self defense is to keep a key held between your fingers in order to have more impact if an offender were to become violent. Photo illustration by Clara Martinez.

Around 9 p.m. March 3, 33-year-old Sarah Everard went missing in South London. The Metropolitan Police confirmed that bodily remains discovered in the woods of Kent belonged to Everard March 12. That evening, the Met police announced that a serving police officer, Wayne Couzens, was charged on accounts of Everard’s kidnap and murder.

“It reminds people of the unsafe conditions that women face every day,” she said. “It’s an outrageous incident. What happened is just disgusting and horrible.”

Similarly, Ryan Kohler (’23) said the severity of the crime is frightening considering Everard was only taking a walk.

“She was going out for a walk and just on the phone with her boyfriend,” she said. “Just doing what she probably does like every day, and she was killed for it.”

As a result, Kohler said she has not taken a walk past 6 p.m. since Everard’s murder.

Just a few days before the discovery of Everard’s body, a UN Women UK survey found that 97% of women between the ages of 18-24 in the U.K. have been sexually harassed in public areas.

Max Van Zyl (’21) said the numerical figure was startling but not a shock considering the environment that allows such harassment to occur.

Heskett said this statistic was somewhat expected due to the normalized tolerance in public areas.

“Every woman I’ve spoken to has had an experience with harassment on the street and from my own experiences, it is unacceptably common,” she said. “It’s definitely disappointing to hear because that’s not the kind of culture and society that I think we should be creating.”

Similar to Heskett, Kohler said the common violations of sexual misconduct have normalized this behavior.

Kohler said another cause for the media’s attention to this murder is because of the perpetrator’s status as a serving police officer.

Van Zyl said a product of Everard’s murder is that more people may be motivated to amend these issues.

“Sometimes it takes an event as shocking as that,” he said. “Now people are really having this conversation on a wider scale.”

Heskett said social media has been a beneficial tool in spreading awareness about the dangers that women encounter.

“In this case, it’s been a positive force for helping people understand what’s going on and also helping people participate in creating change,” she said.

Despite COVID-19 restrictions surrounding large gatherings, a vigil for Everard was held March 13 in Clapham – the last location she was seen.

The vigil ended with many arrests caused by violations of COVID-19 restrictions. Kohler said the nature in which the gathering was violently ended by police negatively impacted what could have been a beneficial exercise for other women.

“The fact that it was ruined, it’s just so upsetting to see that happen when people are just trying to grieve,” she said. “People are probably scared as well, like that could be the reason why they went because they could see someone like them that this just happened to.”

Reflecting on his experience hearing women discuss street harassment, Van Zyl said he encourages other men to be informed about this issue.

“If you’re not willing to engage in a wider conversation about it, at least be aware of it within your own circles,” he said. “Feel like you are someone who your female friends can count upon and that their stories and what they have to say is not gonna fall on deaf ears.”

Despite the phrase “Not All Men” being referred to in defense of claims surrounding stories of sexual harassment, Kohler said she never considered all men as part of the issue. Rather, the regularity of these instances is what causes her to be more careful.

“Of course, not every man is going to like, attack someone,” she said. “But you’re going to be precautious about every single one of those chances, you know, just because it happens so often.”

Even though it’s “Not All Men,” UN Women UK shows it’s 3% away from being all women.