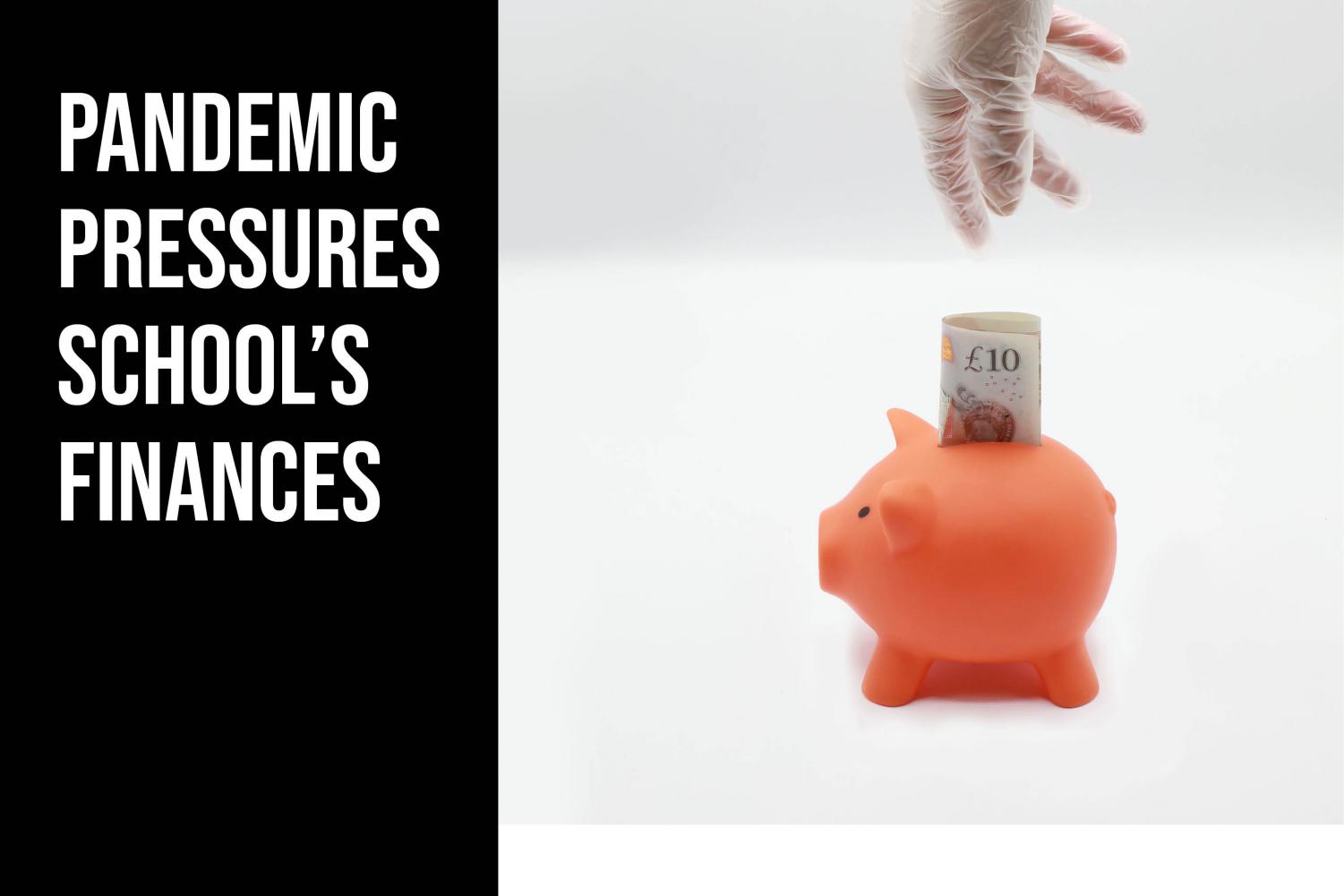 Throughout the pandemic, the administration has overseen the school’s financial standing, cutting expenses without compromising the students’ experience. Photo illustration by Eileen Meidar. (Gabrielle Meidar)

Throughout the pandemic, the administration has overseen the school’s financial standing, cutting expenses without compromising the students’ experience. Photo illustration by Eileen Meidar.

The coronavirus has huge implications for the education sector. The school has taken measures to address these impacts while also maintaining a long-term outlook.

As the coronavirus takes a toll on the economic state of the world, ASL’s finances have not been immune from these shocks.

According to Director of Finance John Robinson, toward the end of 2019-20, the school projected it would post a final deficit of £900,000 for the 2020-21 school year and £1.1 million for 2021-22. However, Robinson said the basis on which they made these projections has now changed, coinciding with the rapid volatility COVID-19 has induced.

Furthermore, Head of School Robin Appleby said in the 2019-20 financial year ending June 30, 2020, the school posted a surplus of approximately £2 million. This means any possible deficits will be largely supported by the surplus from last year.

Appleby said the school hopes to break even this year, but they will not know whether that is the case until later in the year.

Furthermore, Robinson said the new forecast for the 2021-22 school year will depend largely on expected enrollment, which the school has yet to identify.

“Some people will be waiting to see how the COVID situation changes not just here, but in the countries that people are going to be transferring to London from,” he said. “We still have a few months to wait until families finalize those plans.”

According to Robinson, in the 2019-20 school year, 1,405 students were enrolled in the school, whereas this year there are approximately 1,360 – a difference of 45 students. While the enrollment numbers tend to fluctuate each semester, this loss calculates to a decrease in tuition revenue of approximately £1.2 million. Robinson said this is an unusually large decrease.

Associate Director of Advancement for Annual Giving Margaret Pringle said the possible 2020-21 annual deficit is largely due to this loss in enrollment.

According to Robinson, the tuition income constitutes 95% of the total budgeted operating income for 2020-21. Endowment and the Annual Fund constitute the other 5%.

Pringle said the enrollment drop is likely connected to COVID-19 as the number of families that were planning to move from the U.S. to London decreased.

According to Robinson, the reduction in enrollment is not solely to blame for the decrease in income, but also a tuition freeze that has been enacted for the 2020-21 school year. Robinson said the school has decided to continue the tuition freeze for the 2021-22 year.

Appleby said the school made this decision because of the monetary impact COVID-19 has had on families.

“We are very sensitive to the fact that COVID has created situations for families where they are struggling financially, and we wanted to honor that,” she said.

That being said, Pringle said because of this loss in tuition revenue, it will be a “different year for the Annual Fund.”

Every year, the Advancement Committee devises an Annual Fund goal in order to supplement the school’s income.

We are very sensitive to the fact that COVID has created situations for families where they are struggling financially, and we wanted to honor that.”

Director of Advancement Beth Crutcher said the Annual Fund is, as the name indicates, an annual campaign to invite members of the community to support ASL.

According to Co-Chair of the Advancement Committee on the Board of Trustees Hahnah Seminara, the 2019-20 goal for the Annual Fund was £1.8 million. However, due to the budding effects of the pandemic in the spring, the Board decided to take a step back from soliciting Annual Fund gifts from families.

Appleby said, as a result, the fund last year fell short of its original goal by roughly £270,000. Even so, the Advancement Committee achieved approximately 85% of their initial goal. This year the goal has been lowered to £1.5 million.

Pringle said after recognizing the volatility of the current situation, instead of raising more money for the school, the Advancement Committee worked to create an alternative program that aided members of the community instead.

“Given the climate of uncertainty in the spring of 2020, it was very important to recognize this moment of unease and not pursue widespread Annual Fund support,” she said. “So beginning more or less in April 2020, the Annual Fund took a back seat, to a large extent, to make space for the Community Support Fund efforts.”

The Community Support Fund was established by the Board of Trustees toward the end of the last school year.

Pringle said the Advancement Committee created the fund in the hopes that it would support families who were most severely impacted by the COVID-19-induced economic crisis.

Robinson said the school is in awe of the incredible kindness and compassion the community has demonstrated during these unprecedented times.

“The pandemic could not suppress the extraordinary generosity of the ASL community, and we are grateful to the donors to the fund for their loyalty and support,” he said.

Likewise, Pringle said the money that has been raised for these families reflects the true values of the community.

“What it really shows is that people really care about the community and about keeping it together,” she said.

According to Robinson, the school’s budgeted revenue has been reduced by approximately £2.3 million this year compared to the 2019-20 school year. Pringle said the school has focused on cutting expenses as much as reasonably possible without compromising the students’ experience.

The pandemic could not suppress the extraordinary generosity of the ASL community, and we are grateful to the donors to the fund for their loyalty and support”

According to Robinson, this year the majority of the school’s operating income – 77% – is allocated to salaries and benefits for faculty and staff, up 2% from last year.

However, according to Social Studies Teacher Christopher Wolf, this school year teachers have agreed to a “salary freeze,” which will take effect in 2021-22 and help mitigate the school’s operating expenditure.

Wolf, a member of the Salary and Benefits committee on the Faculty Association, said because of the economic circumstances around the world, the committee decided that there weren’t grounds to request a salary increase, recognizing the school has to pay its bills.

For example, Pringle said this year a portion of the school’s operating budget contributes to the purchase of disposable masks, gloves, packs of sanitary wipes, gallons of hand sanitizer, perspex screens in rooms and a daily deep clean to minimize contamination.

In addition, Robinson said at the start of the second semester, the school had saved approximately £250,000 from the lack of school trips, after accounting for school activities and summer camps. However, he said these savings are likely not alone substantial enough to salvage a possible deficit.

Robinson said times like these – “rainy days” – are the reason the school has reserves. However, he also said drawing on reserves must be done with caution as it could lead to budgeting obstacles in the future.

“When will we come out of this cycle?” he said. “We can’t be drawing down on reserves forever because we won’t have those reserves forever. So it is this uncertainty which is the biggest problem in budgeting and planning.”