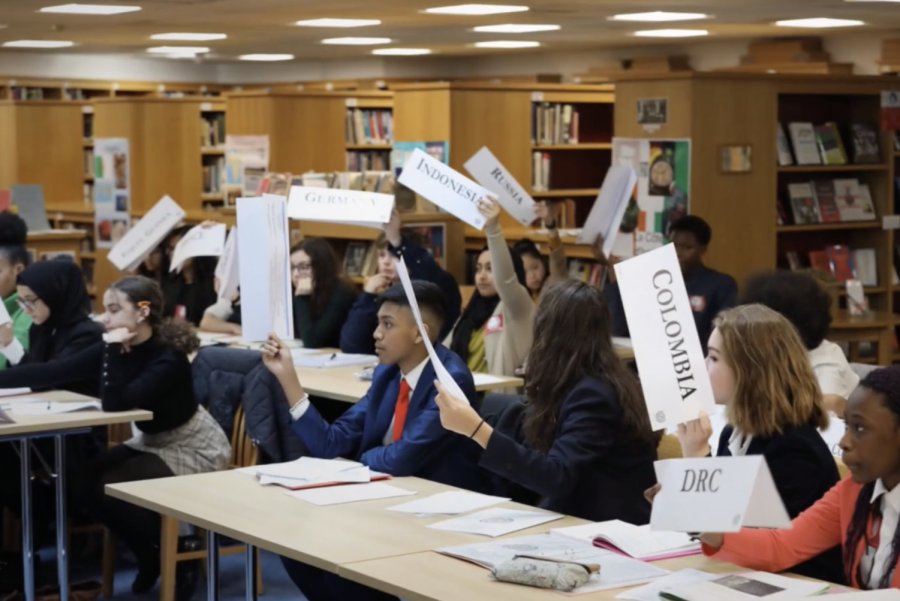 Model UN delegates raise their country plaques in the 2020 West London Conference. This year, the conference was hosted virtually via Zoom March 27, and it provided participants the opportunity to practice debate skills and gain additional experience with conference preparation and structure.

According to the West London Model UN website, the conference was designed as a learning opportunity geared toward less experienced or intermediate delegates wanting to practice debate skills and gain additional experience with conference preparation and structure.

In preparation for the conference, Ruhan Bhasin (’23) said delegates wrote position papers, conducted research on their assigned country and topic and participated in practice debates.

While the conference as a whole revolved around the theme of ethics in war, individual committees focused on different topics including the Bosnian Crisis, Women and Children in War, Militarization of Space and Cybersecurity: AI, and Digital Literacy, according to West London Model UN.

Bhasin participated in the conference as chair of the UN Human Rights Council. He said he attended training sessions in preparation for his position.

“We had three sessions where we went through the whole process of chairing and our trainers told us what to look out for,” he said.

Bhasin said although the conference was executed well and a “really great experience,” it differed from in-person conferences he attended before the COVID-19 pandemic.

“The digital format worked seamlessly thanks to the preparation and organization of the West London Secretary team,” he said. “However, one of the main differences I did feel was that at the end when we were doing final awards and games and stuff like that, there wasn’t as much of a personal connection.”