$15 minimum wage proposal is not foolproof 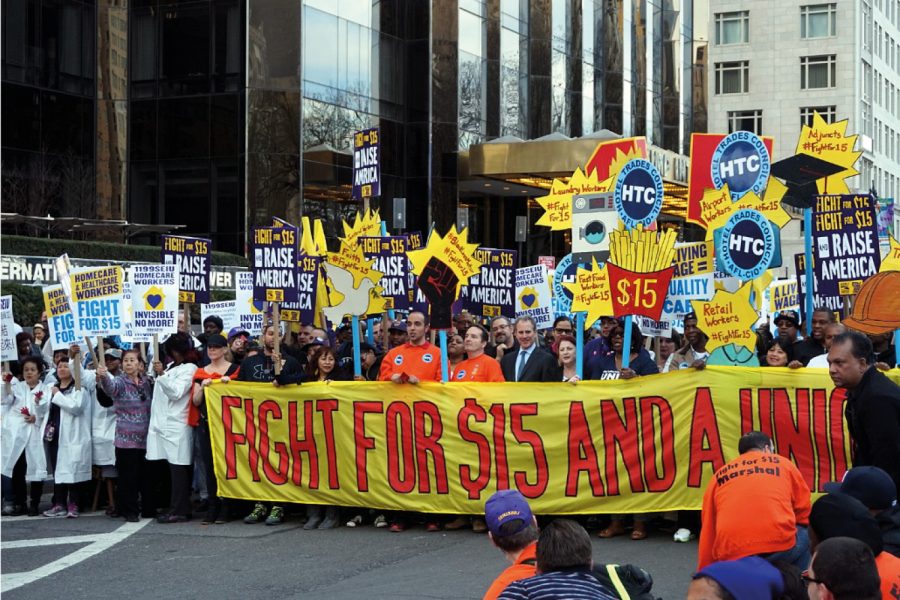 Photo used with permission from The All-Nite Images/Flickr

Protesters in New York march in support of increased minimum wages. A $15 minimum wage is predicted to lift 1.3 million workers out of poverty but also estimates 1.3 million job losses.

President Joe Biden recently signed a $1.9 trillion COVID-19 stimulus plan March 11. However, it failed to include the supposed solution to one of the most prevalent American issues which has heightened since the rise of COVID-19: a $15 minimum wage.

America’s most pressing issues tend to be categorized into two interpretations from each party. Yet, reducing the minimum wage crisis to a partisan issue will not holistically solve the obstacle of low-income workers throughout the U.S.

Increasing the minimum wage is not a partisan issue anyway. Florida’s voters chose former President Trump as their candidate in November 2020 but also voted to raise the minimum wage.

An oversimplified analysis of the policy would conclude that increasing the minimum wage to $15 would in fact reduce poverty providing a more “livable wage.”

However, increasing the minimum wage could raise unemployment levels and increase poverty, especially for those who own and work for small to mid-sized businesses.

According to Politico, the Congressional Budget Office, which analyzed the effects of doubling the federal minimum wage, predicts this policy change would lift 1.3 million workers out of poverty but also result in 1.3 million job losses.

While the $15 minimum wage proposal is aspirational and has its benefits, it will be difficult to come to fruition due to its complexity.

In the past, mainstream politicians have not endorsed such a drastic increase. Former President Barack Obama discussed changing the minimum wage to $10.10 during his presidency, while former Secretary of State Hillary Clinton mentioned a slightly higher $12 wage as part of her campaign in the 2016 election.

The current federal minimum wage, which is $7.25, doesn’t even account for the possibility of providing for others in one’s family with this wage, which is virtually impossible. Many single parents and breadwinners would struggle to maintain a steady income with this wage. Divvy Research also says that the current minimum wage would cover under 50% of the cost of living for four people or even as little as 20% in other states.

A $15 minimum wage is primarily necessary for urban areas with a dense population such as New York City. But in rural less populated areas, $15 would hurt more than a slightly increased wage as Divvy Research stated.

In addition, according to Pew Research, 50.4% of minimum wage earners are between the ages of 16 and 24. Many corporations are not willing to give young workers higher pay since they are unskilled, excluding teenagers from the workforce. Therefore, an increase in the minimum wage would logically result in fewer job opportunities for younger people.

The last time the minimum wage increased was in July 2009 when it went up merely 70 cents. Three months later, the teenage employment index dropped 8%. If this decrease was the effect of less than a dollar shift in the minimum wage, imagine what doubling it could do.

With ranges in the cost of living, the $15 minimum wage can unintentionally create job loss in rural America, especially for smaller businesses.

Big companies such as Amazon have lobbied for and supported the “Fight for 15” campaign in the past. And while the massive online retailer can afford $15 wages for its employees, it can also cut out any smaller competition that comes their way.

Therefore, a $15 minimum wage could inadvertently create the risk of monopolies – big corporations holding power over small businesses and consumers.

Though the minimum wage proposal suggested to be part of the stimulus plan had its flaws, it did include the benefit of eliminating tipped wages by 2027. Tipped workers can legally be given as little as $2.13 per hour since they are expected to receive the rest of their compensation from tips. The struggles of tipped workers have come to light especially during COVID-19, when tips have been sparse.

The proposal at its core does not have malicious intent, but it has overlooked the struggles that rural areas, small businesses, and young workers might face as a result.

If the $15 minimum wage proposal is not reconsidered and adapted, it may very well hurt the same people it is meant to benefit.