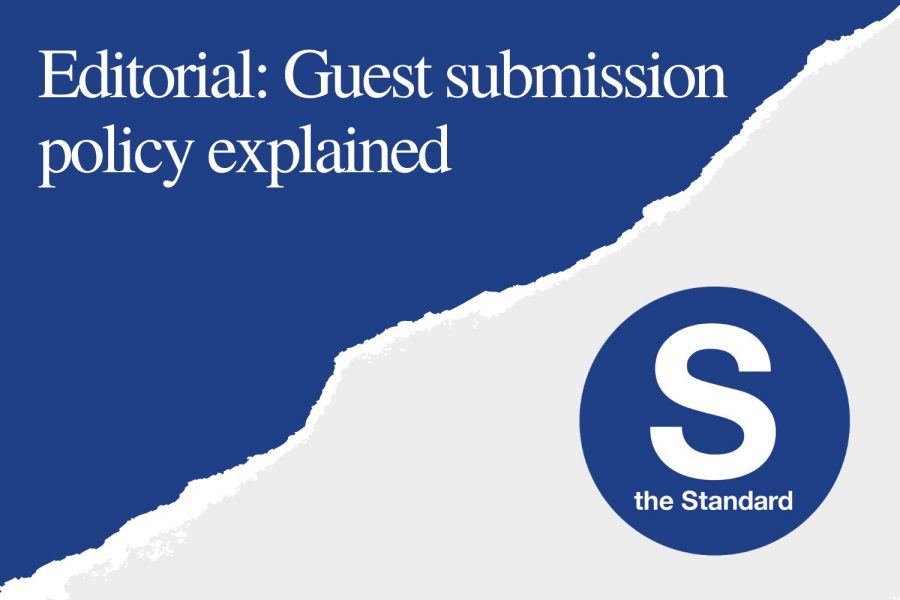 The Standard strives to emulate journalistic and ethical standards in everything we share with our audience. In order to prioritize and protect our community, we reserve the right to withhold publication of guest pieces in line with our guest submission policy.

We want to shed light on the ethical and journalistic standards we hold ourselves to, spurred by a recent situation where we decided to withhold publication of a particular guest piece.

We came to the unanimous conclusion that said piece violates our guest policy, specifically point number two, because it made editors uncomfortable on the basis of their race.

In response, we feel it is important for us to restate and explain our guest submission practices. We hope this editorial provides transparency on how we use our values to evaluate content to act as a productive platform for voices in the community.

Laws and principles for publication

We cannot control the guest submissions we receive, but we can rightfully decide whether or not they are published. The Standard reserves the autonomy to use its policy regarding submissions to make decisions as to what content may be published on its platform.

From a legal standpoint, publications are not compelled to adhere to laws that promote free speech. It is imperative to remember that the First Amendment of the U.S. Constitution protects the people’s right to freedom of speech from their state or Congress.

The law does not, however, state that private institutions such as companies, employers and publications are legally bound to protect the rights listed in the First Amendment. The school’s location in London provides an obvious reason as to why we are not held to the First Amendment. Yet, even scholastic and professional publications in the U.S. are not legally obligated to publish all guest pieces.

Any guest writer whose submission is denied publication is free to express their ideas elsewhere, such as social media or a personal blog. If one is hesitant to do so, this only emphasizes the writer’s awareness of the ramifications of sharing their opinion.

As a principle, freedom of expression is integral to the mission of The Standard as well as that of journalism at large. In the pursuit of a free distribution of ideas, however, The Standard will not platform opinions that embolden oppressive rhetoric, which likewise compromise the values of the community and unnecessarily harm a particular group.

We will not share any content which justifies or perpetuates racist, sexist, homophobic or generally offensive ideologies and/or makes marginalized people feel uncomfortable, unseen or unsafe. The Standard will consistently prioritize the security of the community; anything that infringes upon this security will not be tolerated.

If The Standard chooses not to publish a guest submission on the basis that it offends a certain group, we are not being irresponsible or incompetent in our roles as journalists. Rather, we are acknowledging that the offended group in question will be affected most; their experiences and opinions are the most informed and therefore must be prioritized.

We strive to play a role in minimizing the disenfranchisement, silencing and discrimination of minorities. In this case, the oppression of the few outweighs the indifference of the many.

The wellbeing of those who have experienced discrimination firsthand must be preserved and their humanity must be valued. We acknowledge that publishing any piece containing harmful ideologies will put minority students in further danger by potentially fuelling the spread of such beliefs across the school.

Cultivating diversity is at the forefront of ASL’s inclusivity mission. However, by silencing the voices of minority groups, we would be directly negating that diversity and tokenizing those individuals.

The Standard’s role as a platform for ideas

We encourage and appreciate guest submissions as a means of amplifying differing perspectives and promoting productive dialogue, which are key tenets of our mission statement. This goal can only be achieved if we seek to minimize the detrimental effects of any discriminatory opinions.

If content is submitted to The Standard that violates the policies in place for guest writers, staff writers and editors, we will collectively decide what action must be taken. In some circumstances, this may mean working with the writer to alter the piece to a state in which it can be published, while in others it may mean we will decide not to share the piece with our audience.

We are aware of the common criticism that The Standard’s content primarily promotes left-wing ideologies, ultimately suppressing voices of opposing political beliefs. Yet, The Standard does not evaluate content for its political bias, but instead whether it meets journalistic and ethical standards. In this vein, The Standard would refuse to publish egregious opinions which violate our policies and ethics from any position on the political spectrum.

The following signatories stand by our recent decision, guest submission policy and principles: