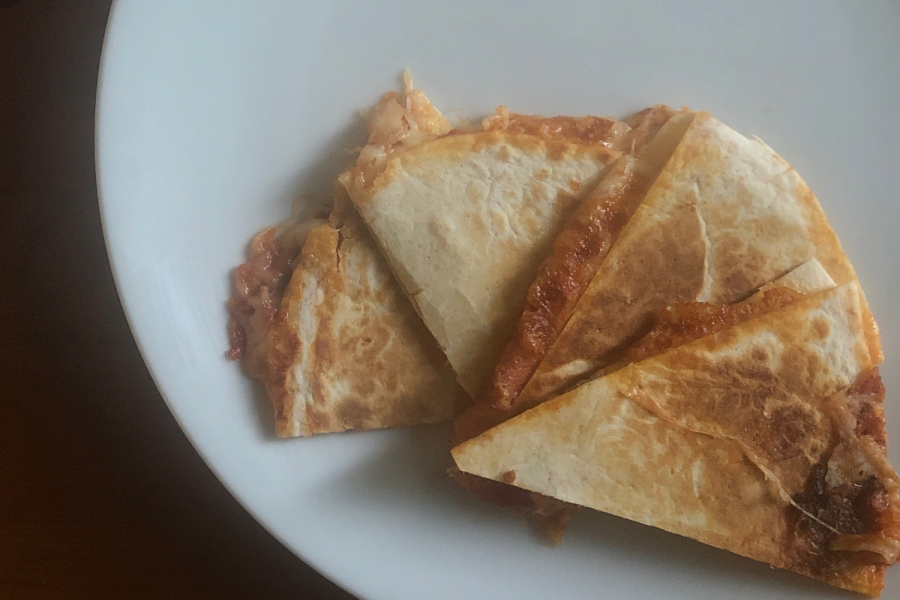 It’s the marriage of two classics in every American household: pizza and quesadillas. Originating in Italy, pizza has grown to become one of the most popular dishes worldwide, while quesadillas, stemming from Mexico, have also captured the taste buds of many.

With nearly 9.5 million views in just one month, the internet has yet to fail the food world with its introduction of the pizza quesadilla via TikTok.

To be completely honest, I don’t even know how to refer to this mystical concoction. Pizza quesadilla? Quesadilla pizza? My personal favorite is the so-called “pizzadilla.” It almost sounds like Godzilla’s less intimidating brother-in-law who just so happens to be Italian.

Before I get a lawsuit for proposing my off-brand Godzilla franchise, here’s a link to the original TikTok that inspired me to make this recipe.

Below, you can find a list of the ingredients and instructions:

Grease panini press or pan and place down tortilla.
Before turning on the heat, assemble fillings. Spoon pizza sauce onto tortilla followed by a sprinkle of cheese. Add any toppings of choice. Top with more cheese.
Sandwich another tortilla on top.
Turn on heat, cooking pizza quesadilla until golden brown (2-3 minutes).

To arrive at the final verdict, I will be assessing the recipe based on three different criteria: accessibility, difficulty and taste.

Admittedly, I didn’t have a lot of the ingredients in my pantry, but being that there are only three major items, it turned out to be nothing a quick trip to the grocery store couldn’t fix.

Since there are so few ingredients, it gives way to many different combinations, and what I love about this recipe is its versatility. There are a number of different ways to elevate it, such as using different tortillas, sauces and cheeses, not to mention the infinite topping combinations.

As for difficulty, I’d estimate this dish took approximately three minutes to complete. It’s the perfect “no-brainer” snack whenever mom won’t let you order Deliveroo for the fifth time in a week.

But are those three minutes really worth the end result? I’ll tell you, nothing could’ve prepared me for the trip this “pizzadilla” embarked me on.

I was brought back to the play structures at Chuck E. Cheese: the bright green and yellow plastic tubes drenched in pee. Then, suddenly, I was teleported inside the booth of my favorite Mexican restaurant, when my extremely Caucasian father attempted to recite the entire menu with his high school-level knowledge of Spanish.

That’s the only way to describe the taste: weird, nostalgic and borderline trauma-provoking, yet delicious at the same time.

Everyone needs to try this combo at least once in their life to channel their childhood again.