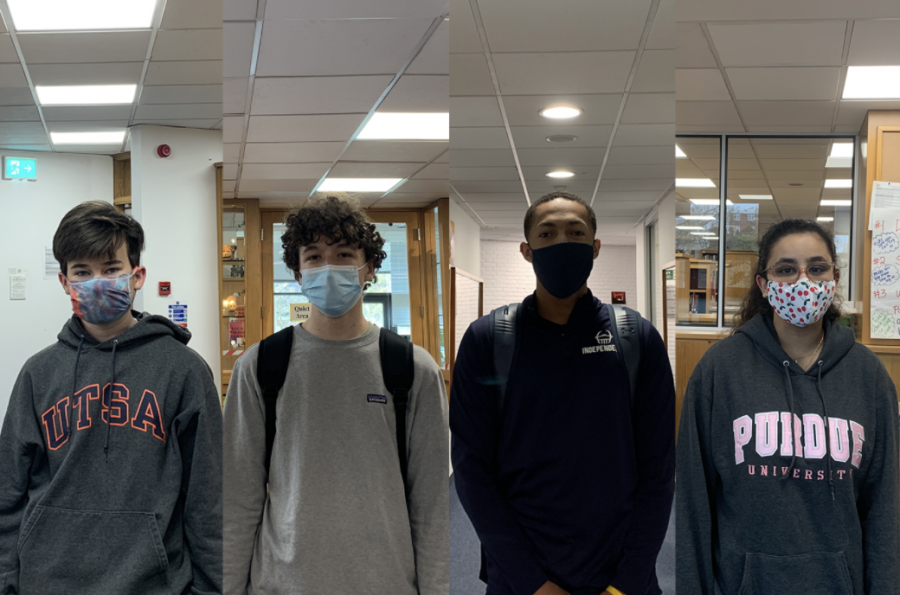 Kingston Bridges (’24), Sam Hamilton (’23), Brian Lewis (’22) and Basmah Alfayez (’21) are new to the High School this year amidst the COVID-19 pandemic. Now having made it to the final quarter of the school year, these students reflect on the experience of being new during this unusual year.

Restrictions due to the COVID-19 have impacted many facets of student life in the High School. The experience of new students has been particularly affected as the pandemic has altered many of the usual ways of integrating into the school community.

Kingston Bridges (’24) moved to London last year from Friendswood, Texas, a small town in the Houston area. He said the COVID-19 restrictions in the U.K. made it harder for him to adjust to the city.

“It was definitely new, but it wasn’t unpleasant or anything like that,” he said. “I’m really excited to see London. Probably the worst part has been not being able to, you know, go around and see things.”

Basmah Alfayez (’21) joined the High School in September 2020 after having attended the same school in Saudi Arabia since kindergarten. She also began on Zoom because of quarantine rules.

For the first two weeks of the school year, Alfayez said her teachers would occasionally forget to open Zoom meetings, and lessons were tailored to the in-person students, thereby making her experience more challenging.

“It was difficult at first, catching up, especially after two weeks of Zoom,” she said. “The other new kids who got to be there on the first day had it easier than I did.”

Alfayez said her first day on campus was challenging to navigate after starting the school year on Zoom.

“My first day in person got a bit scary because it was a bit hard finding my classes, and lunch was a bit difficult to arrange,” she said.

Sam Hamilton (’23) said his first day at the school felt intimidating. Hamilton moved to London from Singapore, where he had spent most of his life, in August 2020.

“I enjoyed it, but to be honest, it just feels like a bit of a blur because I was just so stressed and anxious,” he said.

Brian Lewis (’22), who said he has been to three different schools over the course of his high school career, moved to London from Northern Virginia at the beginning of the 2020-21 school year.

“I’ve been there, done that when it comes to being a new student,” he said. “Overall, it wasn’t that bad.”

Bridges began his school year online in Texas at his previous high school before he moved to London to attend ASL for the second semester. Since the semester started online, Bridges said it was difficult to adjust to his class schedule and meet his new teachers and classmates virtually.

“Coming here obviously has its challenges, especially starting on Zoom and then seeing everyone in person,” he said. “But everything was easy to find and everyone made the transition really, really easy.”

Since Alfayez did not get to experience many of the usual community events that have taken place in past years, she said she had to work harder to form connections with other students.

“Moving wouldn’t have been as bad if I had got the fundamental experiences that would have occurred without COVID, like a school dance or something, or a party, or a back to school lunch,” she said.

Yet, having been in the High School for several months, Alfayez said she is becoming acclimated.

“I feel a part of the community in the sense that I know that there are people I can lean on for help,” she said.

However, Alfayez said she doesn’t always feel entirely a part of things, especially among students that have known each other for several years.

“There’s just small things that you do when you’re subconsciously comfortable with everyone,” she said. “I can’t really do that as much since I’m still new and becoming accustomed to my environment.”

Lewis said he found the community dynamic of the school helpful during his transition.

“This is a very close-knit school,” he said. “There’s a smaller population so you really get to know who everybody is, which is nice in its own ways.

Ultimately, Alfayez said she found the community to be friendly and inviting despite COVID-19-related restrictions.

“I do feel very welcome,” she said. “I didn’t expect to feel this welcomed, but as soon as I arrived I felt that.”

Hamilton said despite the anxieties of being a new student during the pandemic, his overall experience has been positive.

“In Singapore, especially within the international community, which is the community I grew up in, everyone knew each other,” he said. “It’s nice to have a change where you can finally meet some new people and build new relationships.”

For social reasons, Alfayez said she felt grateful that most of the school year was spent learning in-person.

“If we had stayed online for the majority of the year, or the entire year, I probably would not have made friends because it’s really hard to meet people online,” she said.

Lewis said he didn’t find distance learning to be too challenging, and he was pleasantly surprised when he returned to campus.“From a social standpoint, I feel like it picked up a whole bunch more,” he said. “Everybody – at the same time – was in the same position I was at. Now everybody’s looking to come back and socialize, so I was able to fit into the equation.”

Alfayez said while opportunities for making friends were limited by COVID-19, she still found ways to be social.

“You take what you can get and I’m glad I got what I got,” she said. “People have been really nice to me.”

At the moment, Bridges said he is not participating in any extracurriculars.

“Next year, I’ll definitely try to participate in some of that stuff, but, you know, just being new and everything, I kind of wanted to get the gist of things first,” he said.

Alfayez said she felt information about extracurriculars was easy to access through systems like the morning announcements. She said she participates in the Future Leaders in Medicine Club and the Middle Eastern Club, and she started her own Crafts Club.

Hamilton, a member of Model United Nations, the Human Rights Society and the Political Science Society, said that, for the most part, it was easy for him to find activities to participate in. However, he said that sometimes he misses hearing about certain opportunities because, as a new student, he doesn’t have the connections that other students might have.

Challenges posed by the pandemic

Despite the difficulties Alfayez has faced this year due to COVID-19, she said there were lessons to be learned from her experience this year.

“I’m going off to college next year,” she said. “We’re all going to be freshmen and everyone’s going to be stressed out about making new friends, but I’ll be there, like, ‘I did this last year, so you guys can lean on me.’”

Even so, Alfayez said there is “room for improvement” in terms of the community supporting new students during the pandemic.

“There’s still more that they can do to make the students feel more welcome in the school,” she said. “They’re kind of heavily leaning on COVID as an excuse, but there are ways to help the new students even though there is COVID.”

Similarly, having moved multiple times, Bridges said he tends to be able to make friends easily. Yet, he said this year has been different.

“I haven’t really met anyone,” he said. “It’s been pretty difficult.”

Director of Student Life James Perry said the Student Ambassadors run a buddy program over the summer, which involves reaching out to new students by email before the school year starts and inviting them to activities. Also, Perry said sometimes the program connects new students with returning students when they begin school.

Perry said there are cases in which students have a hard time connecting, and this year has posed more challenges in that regard.

Ultimately, Alfayez said she wishes she could have had a little more support during her transition.

“I’m grateful that there are people that I was able to reach out to and that helped me make new friends and meet new people, but if I didn’t reach out, then who knows where I would have been today,” she said. “There are a lot of people who don’t love reaching out, so I think that the school should have made that available.”

Overall, Lewis said he found ways to look forward to the future throughout his pandemic experience.

“There definitely is some sense of isolation at times, you know, especially as a new kid, especially at the beginning of the year,” he said. “My biggest thing is just trying to look forward to the future. Hopefully, this is temporary.”