The Standard • 28th May 2021 • https://standard.asl.org/18329/sports/soccer-teams-play-final-games-of-season-recognize-grade-12-athletes/ 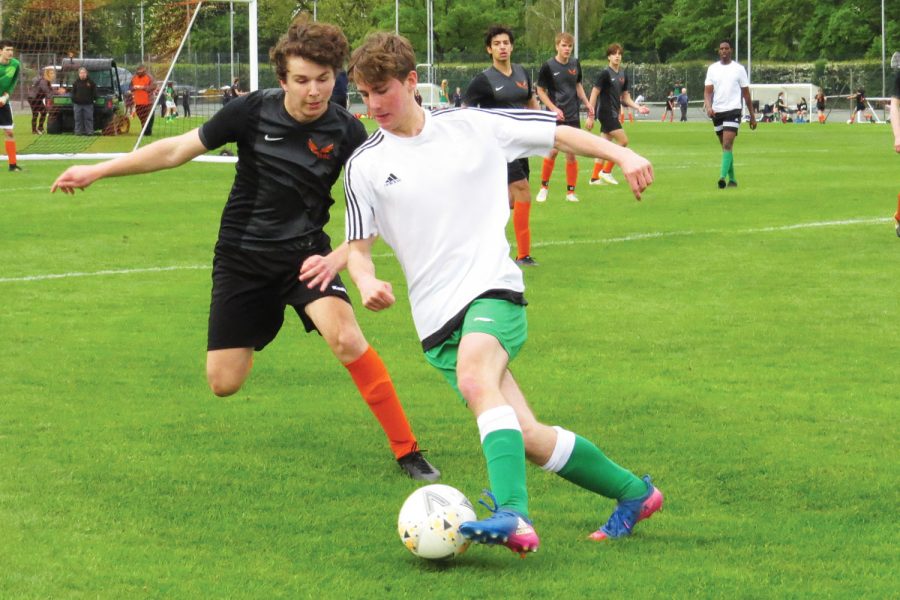 Max van Zyl (’21) attempts to steal the ball from an opponent during the varsity boys’ game against Cobham May 26. Cobham defeated ASL 3-0 in ASL’s last game of the season.

Eleanor Benton (’21) scored four goals out of the nine total, with Anna Kim (’21) and Lulu Linkas (’21) also contributing to the scoresheet. Benton said these goals and overall strategy reflected the playing caliber everybody brought to the game.

“The score definitely represented how we played,” she said. “We played super well. It was – even though there were only two games – the best game of our season.”

Mateo Farina (’21) said losing the last game of the season, while upsetting, does not ruin the entirety of their season.

“A two-game season can’t really change the legacy,” he said. “While it hurts, it’s also like, we know that it’s not a huge game, this wasn’t like ISSTs.”

Girls soccer recognized the Grade 12 athletes on both teams with flowers and a round of applause. As her last game on the ASL soccer team, Benton said she enjoyed tying together the season playing with athletes from Grade 8 to Grade 12.

“It was definitely a lot more nostalgic,” she said. “I know a lot of the seniors, especially in this last game, wanted to rally all the grades together on our team and just like, bring everybody together for our last game.”