The Standard • 28th May 2021 • https://standard.asl.org/18341/sports/track-and-field-team-competes-in-first-meet-of-season-after-year-hiatus/ 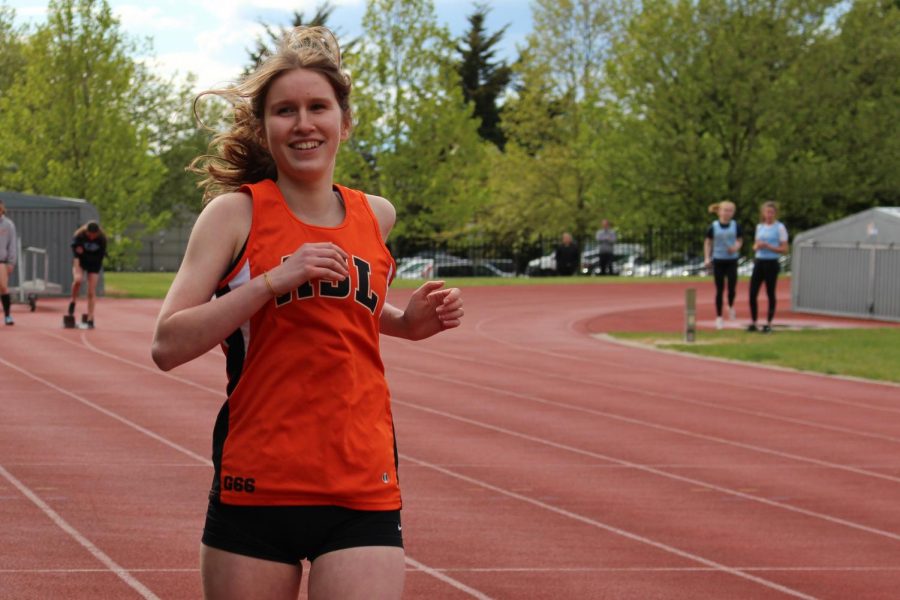 Annesley Potchatek (’24) smiles while warming up for the 100 meter race.

The High School track and field team and Grade 8 athletes competed against Hillingdon at Willesden Sports Centre May 19. The meet was the first and final in-person meet of the season, following a year of no athletics due to COVID-19. From May 24-28, the track and field team will compete against British schools virtually.

Track and Field Coach and Grade 8 Social Studies Teacher Ryan Steege said it was uncertain whether the meet would take place at all due to COVID-19 restrictions and the possibility of rain.

However, Steege said he was extremely grateful for the opportunity to have an in-person meet as he was disappointed that he couldn’t coach over the past year.

“It’s great to be back on the track,” he said. “I’m just super proud of the group and very thankful we had this opportunity, and for the athletic department for getting it worked out, and thankful Mother Nature helped us out today.”

Poppy Fordu (’24) competed in discus, in which she placed first – with a throw of 13.70 meters – and hurdles, the event she said she was most excited for.

Fordu said the meet was memorable because the entire team created an uplifting and collaborative environment.

“The whole team worked really well together, and we all were like celebrating each other’s wins,” she said. “We all cheered each other on when we needed help or encouragement.”

Fordu said the support she received from her teammates motivated her to “push harder” during the meet.

“It made me want to push harder and work hard for like— both for my team and for myself and try to be the best I can,” she said.

Steege said he was proud of all his athletes as they put in their best effort despite the variety in skill level.

“Everybody got to the races on time, everybody ran hard. They all finished through the line and really performed.”

Fordu said she was thrilled for sports to resume after the COVID-19 hiatus and missed the feeling of competing.

“It was really fun finally being able to compete against people for the first time in, like, a year,” she said. “It felt really good to be back.”

“[I found it hard] to focus, and being able to do something that I haven’t tried before,” she said. “I never tried 100 hurdles before, which was very interesting to do.”

Baxter said that out of all the events he partook in, he enjoyed shot put best, in which he won first place with a 12.86 meter throw and broke the school record. Baxter said he believes shot put is his strongest event as “it draws on sort of explosive strength, which is one of the things I’m good at.”

Ultimately, Baxter said he found it difficult to transition to meets after a year without athletics, but he enjoyed the feeling of running through the track and competing again.

“It’s always tough to go from a standstill to running, but it’s great to have some competition and to be able to mark down the times and whatnot, and get out here and do it,” he said. “It’s so nice to have a proper competition and something for the first time.”

Moreover, Baxter said his favorite aspect of track is being social with others while also enjoying the sport.

Furthermore, Fordu said not only did she feel supported by her own team, but also by her Hillingdon opponents.

“I felt a lot of support,” she said. “Everyone was, like, cheering me on and saying ‘keep going you can do this’ which was really nice to hear even though we’re opposite teams.”

Similarly, Fordu said she values being social and having good sportsmanship because it fosters harmonious relations between the teams and unites.

“[I want for] teams to open up more and not to see it as a competitive type thing and just for awards.”

Steege said the best part of being a coach is building relationships with his athletes and watching them grow over the years.

“[I love] the opportunity I get to spend watching athletes grow and explore kind of where their boundaries are, and how they can push themselves and, and achieve,” he said.

Steege has been with some of his athletes from middle school until Grade 12, and he said he can’t wait to see students who are new to track develop their skills throughout the course of high school.

“Championships are always great,” Steege said. “[However,] the most important thing and the most rewarding thing is the relationships that are with the athletes and watching them grow.