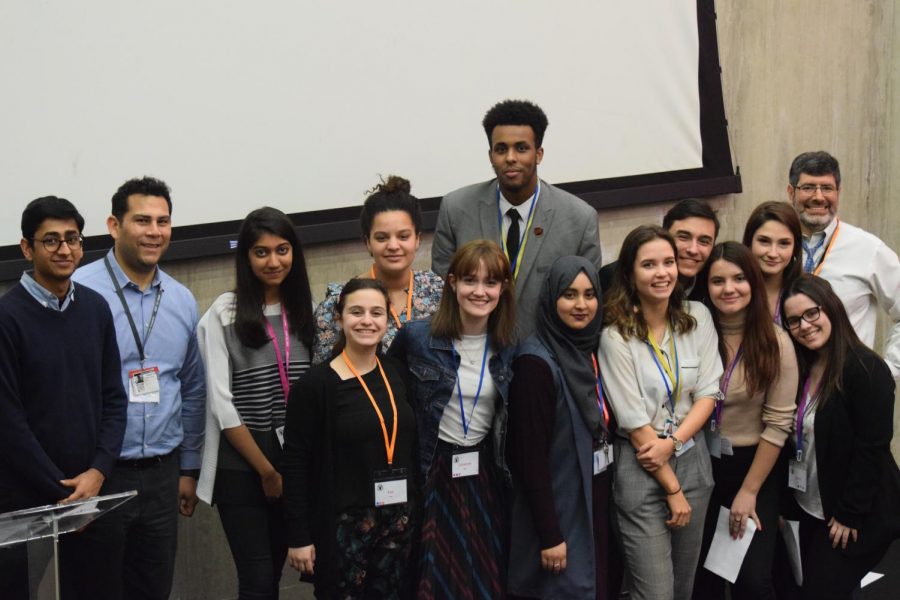 The annual youngPOWER conference allows ASL students to interact with those from a variety of London schools, providing them with experiences that influence their futures.

For many students, the experience of attending the youngPOWER conference has exposed them to the vast diversity represented throughout the wider community. This has left long-lasting effects on their lives even after graduating.

youngPOWER, a conference organized by students from ASL and Westminster Academy,  brings together a number of London schools to tackle social justice issues. According to Director of Community Action Brandon Block, the conference consists of speakers, an identifier activity, a panel discussion, a story exchange and workshops.

“It let me learn a lot of different people’s stories and how to have conversations with people who are from all types of backgrounds,” Lynch said. “Getting the chance to hear different experiences is always important, and it’s allowed me to move into my academic life with empathy.”

Daya Benami (’20) attended the conference in Grades 10-11 and was a conference organizer in Grade 12.

Benami said when people are in privileged socio-economic positions, they may only interact with people in their own bubble and, therefore, are unable to see the diversity of people and their experiences. Thus, she said interacting with students at the conference allowed her to build connections in the wider London community and broaden her global perspective.

“It was important for my self growth and our student body to engage with people who have different life experiences,” Benami said. “Across London there’s a huge diversity of ethnicity, race, socio-economic status, political opinions, nationality. When you push yourself to see all of that, you can understand a lot more about the world.”

“It made me realise that my circumstances and ASL’s place is unique, and it allowed me to appreciate that more,” he said. “There’s a lot to be learned from people who have very different experiences.”

After having the opportunity to understand social justice issues deeply, Benami said she wants to pursue a career in human rights. She said youngPOWER played a substantial part in her drive to make a change in the world.

“A combination of my background, education and my interests – but also experiences I had with youngPOWER – contributed to my desire to make a positive social political impact,” she said.

In addition, Prakash said youngPOWER showed him the impacts unequal distribution of resources can have on students. He said even if students have great potential, they are often limited by these socioeconomic disparities.

Prakash attends Cambridge University, where he participates in programs encouraging students from underrepresented groups to apply to Cambridge. As part of one program, he said he hosted a group of students in his dorm room, allowing them to assess whether they were interested in applying.

“Maybe there’s students who don’t have the resources or don’t have the background to facilitate an easy transition into university so that was really rewarding,” he said. “It directly relates to youngPOWER because I saw the impact of very unequal resources among students and unequal opportunities on students.”

According to Block, the story exchange is among the activities usually offered at the conference. Students are put into random discussion groups, where they share an experience around power, prejudice or privilege with a partner. Students then tell their partner’s story to the group, acting as if it happened to them.

Benami said this story exchange was her favorite activity when she took part in the  conference because telling someone else’s story from her own perspective helped her understand it better.

“When you tell [the story] yourself, you understand it to a deeper level and, in order to tell the story authentically, you have to imagine as if it were you,” she said.

Prakash said he also found the story exchange activity to be very powerful as hearing stories he had never heard before led him to be more aware of his surroundings.

“Sometimes at ASL I would have a busy day, come back home quickly, almost forget I was in London,” he said. “Hearing from people who aren’t able to forget that, who live in certain circumstances where there are harsh day-to-day realities different to mine was very enlightening.”

According to Block, the conference also consists of workshops led by ASL or Westminster Academy students that confront a social justice issue, as well as other speakers.

The conference typically takes place every year at Westminster Academy. This year, youngPOWER was held over Zoom for the first time, taking place from 4 p.m. to 6 p.m. March 19 and 10 a.m. to 12 p.m. March 20.

Being new to ASL this year, Natasha Singh (’23) attended the conference for the first time. She said she decided to attend to further educate herself on social justice issues.

Singh said it would have been easier to have conversations in person as it was more challenging to interact over Zoom.

“It’s harder to connect with people like starting a conversation, talking about your personal feelings or your views on something,” she said. “To a screen, it’s really difficult and weird, so you can’t really connect on a deep level.”

Singh said the activity showed her who was struggling with different issues and revealed similarities she had with others.