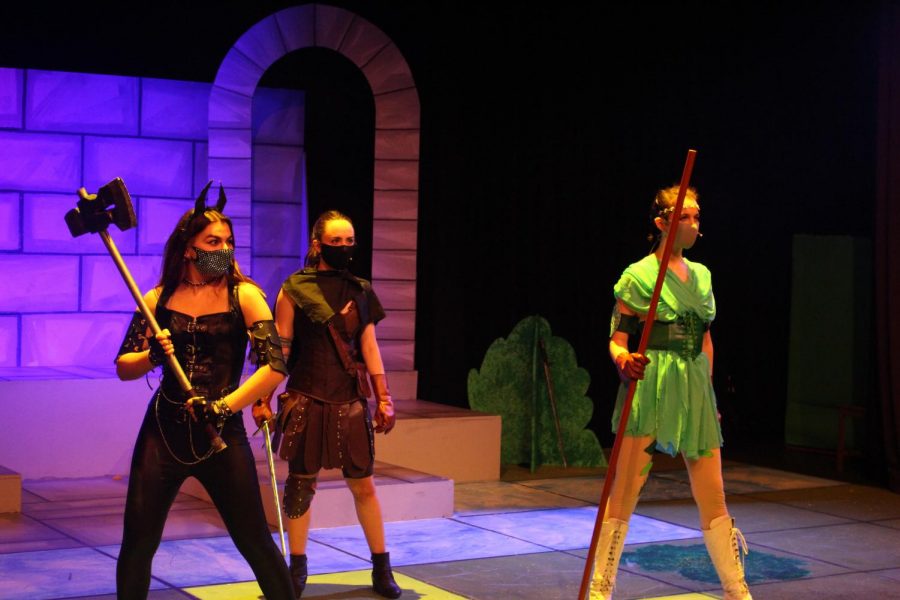 Kleidi Likola (’21), Charlotte Fink (’22) and Danna Rubesh (’22) pose as their characters in the fantasy realm of “Dungeons & Dragons” during a performance June 2. The play had 12 cast members that had been rehearsing for the production since January.

The Advanced Acting Play Production class performed the play “She Kills Monsters” by Qui Nguyen beginning June 2 and ending June 4. The final performance was live-streamed June 4. (Note: only those with an ASL login can access the video recording.)

The performance livestream was offered to increase viewership since COVID-19 restrictions limited the audience capacity to 80 and due to concerns surrounding the comfort level of gathering in a theater, per Performing Arts Teacher and Director Todd Sessoms.

The production was given permission to host a live performance shortly after returning from distance learning in March.

“She Kills Monsters” falls under the umbrella of both comedy and drama. The production details the protagonist Agnes Evans’ experience following her family’s death and her sister leaving behind a “Dungeons & Dragons” notebook. The notebook then throws Evans into a fantasy realm that bears resemblance to the numerous challenges she faces in her daily life.

Solenne Jackson (’21), who played the role of Evans, said the opposing sides of the play pose a challenge when balancing different aspects of her character’s personality.

“It’s difficult playing all the grief, but I think it’s really easy trying to find that like, sympathetic, really lovable character that Agnes is,” she said.

Sessoms said the storyline of the play and the themes unearthed during Agnes’ journey through her fantasy realm are relatable to many in their experience with relationship and family challenges.

“[The play] really mirrors the experience that all of us have,” he said. “Sometimes it’s easier to tell stories around them that are fictitious and to kind of make these monsters seem bigger and sharper toothed when really they’re ones that we have to face in our everyday life.”

After attending the live performance June 3, Ellie Mankarious (’21) said the heavy subject matter did not detract from the comedic moments of the play.

“It did cover a lot of darker, harder themes but in a light-hearted way,” she said. “They did a really good job of like, not being offensive but getting the message across without it being a sad or depressing place.”

Jackson said the experience of performing with an audience is significantly more enjoyable than an exclusively live-streamed performance.

“Hearing the audience laugh with you and waiting for that laughter to die down before you get to deliver the next line is so fun,” she said. “It’s the most rewarding feeling, I mean, especially since it’s a comedy.”

Sessoms said the intricate set design of the stage was utilized to reflect the fantasy realm of a video game while simultaneously enforcing social distancing. The stage is set up in a grid pattern, with each box measuring one cubic meter.

Despite the implementation of these measures, multiple scenes in the play involve choreographed fighting on stage that do not adhere to social distancing. Sessoms said they “sort of bend that rule a little bit here and there,” which is acceptable on account of the mask mandate.

“We are performing with masks on, and that is something that has been, maybe as an actor, one of the greatest challenges.”

Similarly, Jackson said performing on stage with a mask requires forms of expression beyond relying purely on her face to convey emotion.

“You just don’t see enough of people’s expressions,” she said. “I try to combat that by being as expressive as I can with my eyes and with other gestures and then really looking at the audience.”

Actors must also wear a microphone on top of their masks, which Jay Heyman (’21) said has been “actually really difficult” given the significant emphasis placed on annunciation to ensure that each word is clearly communicated.

Heyman plays the role of Evil Gabbi, one of Agnes’ real life bullies reflected in the fantasy realm. Heyman said he echoes the notion that masks have been a challenge in emoting to the audience, despite not impacting his acting ability.

Heyman said another benefit to performing in person is providing the community an opportunity to escape from technology and attend a social event.

“It’s just a different feeling, especially being able to come watch it with other people and not just you sitting at home at a computer screen, because I think that people have just had enough of looking at their computers this year,” he said.

Like Heyman, Mankarious said she was appreciative of attending the play in person.

“The lights and the atmosphere of the theater is very special,” she said. “You can’t compare it to being at home behind a screen.”

Ultimately, Jackson said the ability to perform live is an avenue to engage with others amid COVID-19 restrictions.

“Having a group of people together in a shared space again, it’s just really the most incredible thing,” she said. “All the performers love it.”