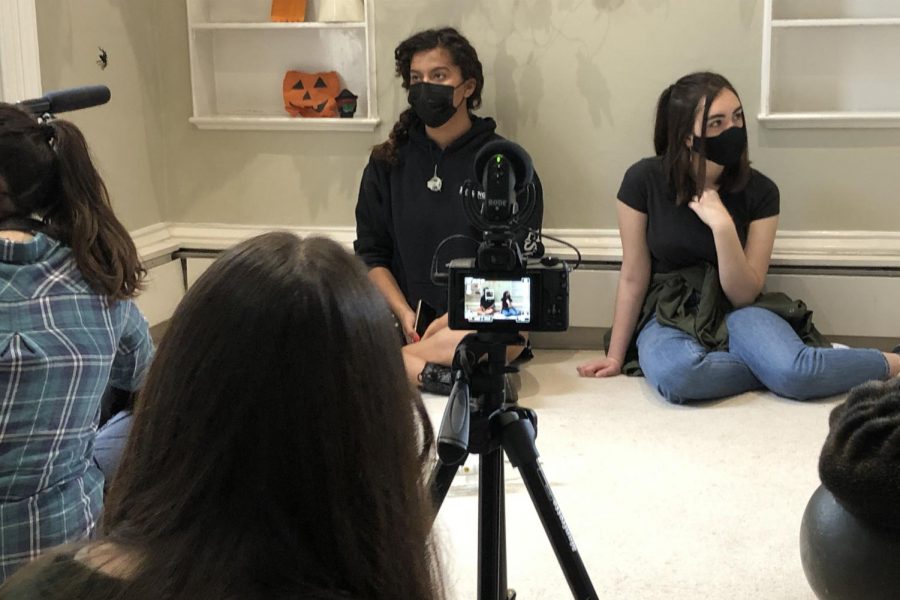 Ruby Read (’23) and Ellie Taylor (’23) act in a scene filmed at 47 Grove End Road May 8. Read and Taylor are both enrolled in the Advanced Acting: TV and Film class and collaborated with two other film classes to produce three-minute films for the annual High School Film Festival.

Annually, students enrolled in the Film Production, Advanced Acting: TV and Film, and Literature and Film classes unite to assemble a series of short videos for the Film Festival. After spending a semester practicing film production skills, the year culminates with students applying various aspects of film production: screenplay writing, directing and editing.

To give students more time in post-production, the films will premiere virtually June 16 as a result of postponing the original in-person premiere date June 8, per English Teacher Mark Mazzenga.

Mazzenga said the Film Festival is designed to provide students with an authentic experience of engaging in a film production process from start to finish.

This year, films were limited to three minutes and had three-page scripts written by the Literature and Film class as well as other members of the student body. However, in previous years, students produced films with up to 10-page scripts, a change Mazzenga said was a result of wanting to work with screenplays with less complex locations and characters.

Another aspect introduced to the festival this year is the selection of a theme – this year’s being “masks” – which was used as inspiration. Mazzenga said the addition of a theme was utilized to give screenwriters a distinctive focus to consider when writing their scripts.

Ruby Read (’23), who is enrolled in Advanced Acting: TV and Film, said the experience of collaborating with multiple classes to produce each film was an educational and generally positive experience.

“It was honestly so fun because everyone brought different forms of knowledge about film into the same project,” she said.

Alex Bond (’24), a member of the Film and Production class, said another beneficial aspect of the festival is the added freedom of editing in comparison to other academic projects.

“That’s the fun part, actually making something that’s not just like, throw-away,” he said. “It’s more of an actual movie I guess. It doesn’t feel as much like a school project.”

Read said despite the challenges of acting in an authentic filming atmosphere, the end product is rewarding and she hopes it will be enjoyable for the audience.

“I did not anticipate how difficult it was, and the amount of times we had to redo one shot was insane,” she said. “But, it all pulled through and hopefully they come out really well because we put a lot of hard work into them.”
More photos: