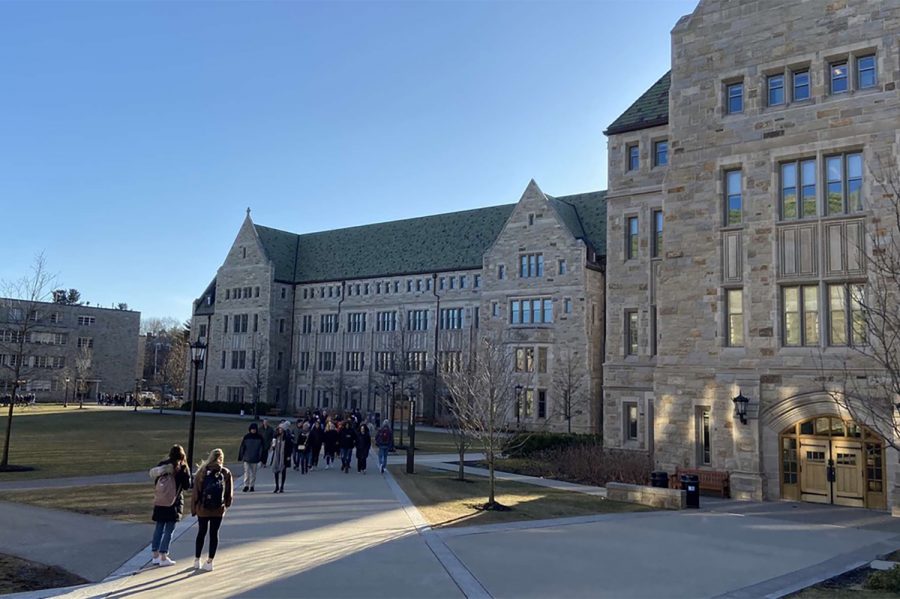 Elena Stathopoulos (’21) tours Boston College in February 2020. She visited the campus before the pandemic and subsequent shutdown of campus tours.

After U.S. schools released final application decisions in the spring and as graduation marked the end of the Class of 2021’s high school journey, students planning to study in the U.S. are finalizing their college plans. However, COVID-19 affected multiple aspects of the U.S. admissions process this year, such as college touring and acceptance rates.

Director of Student Advising Anne Richardson said one of the main struggles of the application process this year is the limited access to campus touring due to pandemic restrictions.

“For students, what’s been difficult is that they’ve not been able to visit colleges,” she said. “While colleges I think have done an extraordinary— have made extraordinary efforts to make their campuses as accessible virtually as they can, I think some students have, have missed not being able to sort of have that rite of passage of stepping onto campuses.”

Elena Stathopoulos (’21), who gained admission into Boston College via early decision in December, was able to tour campuses prior to the pandemic, where she said the atmosphere of Boston College “immediately captivated” her.

“When you see students walking around and like smiling, laughing and talking, you can see if you really fit in, and I could see myself fitting in inside the school,” she said.

According to The Wall Street Journal, COVID-19 circumstances prompted over 1,600 four-year colleges to omit standardized test score requirements during the 2020-21 school year. Thus, Richardson said another struggle of this year’s admissions process was lower acceptance rates as a result of increased applications.

“This year, the college admissions officers have coped with enormous pressures,” she said. “Application numbers are just extraordinary. I mean, UCLA had 139,000 applications this year.”

Additionally, The Wall Street Journal reports that UCLA had a 28% increase in applications from 2020 to 2021. Similarly, Harvard University received 57,000 first year student applications this year, a 42% increase from the yearly average in 2020.

Eric Henrikson (’21), who will be attending the University of South California, said the number of applicants and consequent lower acceptance rates posed challenges for him.

“The sheer amount of people was really shocking,” he said. “That was kind of a struggle for, you know myself, as well as other people just, you know, getting more rejections than you would have wanted.”

Henrikson was initially declined by two schools in the early decision and early action windows. Although Henrikson said he was “disheartened” by this outcome, he said he persevered and kept a positive attitude.

“There’s so many ways that you will end up happy wherever you end up going,” he said. “A lot of the time where you get upset just because we don’t get to get into a school that’s more prestigious than another one, rather than just kind of like, valuing the main important things about what we really would want from a college experience.”

Another obstacle students faced this year was dealing with the admissions process virtually. Stathopoulos said COVID-19 circumstances did not hinder her college application process to the degree experienced by other students she heard about. Yet, Stathopoulos said the process was still difficult as she had to do most of it remotely.

“Being able to work with someone online is very different than [in person],” she said. “Although [the university advisors] were still like really helpful and communicative on like email and stuff, it wasn’t really the same.”

Although COVID-19 has made it harder for students and teachers to interact with one another, Richardson said the Student and University Advising team strived to continue as a reachable resource for students and families.

“We pride ourselves on being really available for students and for their families whenever they need to ask a question,” she said. “I don’t think our availability or the way in which we counsel students has changed in that sense.”

Overall, Stathopoulos said she believes everyone’s experience with the admissions process will have a positive outcome.

“In the end, it will all work out for everyone, so there’s not really that much to stress about at the end of the day,” she said. “But I guess in the moment it’s like stressful because it is like a big thing, like, to decide [where] you’re spending the next four years of your life.”