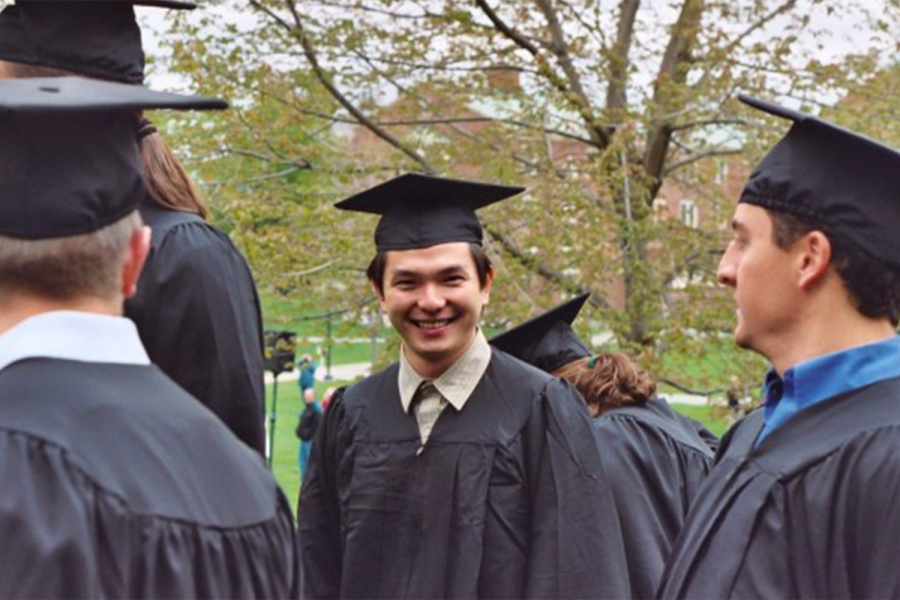 Grade 12 Dean and Social Studies Teacher Rodney Yeoh smiles during his commencement at Colby College in 2005. Yeoh said he entered Colby expecting to study medicine, but discovered a passion for religion and focused his studies on that subject instead. After graduating from Colby, Yeoh pursued his interest in religion in different ways, such as through attending divinity school, working for an organization that studies religious affairs in the U.S. and teaching a world religions class at a school in Boston.

Grade 12 Dean and Social Studies Teacher Rodney Yeoh said he did not normally pay attention to the advertisement section of the local newspaper in his hometown of Ipoh, Malaysia. Yet, around Grade 10, his life changed course when he found an advertisement for applications for Mahindra United World College India (UWC).

Yeoh was accepted to UWC six months later, which he said was a “great honor and privilege,” and he spent his Grade 11 and 12 years there.

From UWC, Yeoh moved to the U.S. to attend Colby College. He said he considered going back to Malaysia for his undergraduate degree, but “couldn’t say no to” the great education and full scholarship that Colby offered him through the UWC Davis Scholars program.

Entering Colby, Yeoh said he expected to study pre-med. From around the age of 10, he had always wanted to become a doctor.

However, to fulfill his liberal arts credit, Yeoh also took an array of humanities courses he found interesting. Thus, in his third year, while participating in humanities as well as scientific research, Yeoh said he realized his passion was for studying religion rather than science.

“From doing [scientific research] versus doing research papers in religious studies, it was very clear that I was interested in the study of religion,” he said. “And I was like, ‘I can’t, I can’t be lying to myself. I mean, I may be interested in the idea of becoming a doctor, but the reality is, I just love writing papers. I just love talking about the study of religion much, much more than I love talking about biochemistry.’”

In reflection, Yeoh said his interest in religion stemmed from his exposure from a young age in his multi-religious community in Malaysia; Yeoh grew up as Catholic, attended church every Sunday and religious study classes, and was constantly surrounded by conversations regarding religion.

Despite his religious upbringing, Yeoh said he wouldn’t have studied religion if he had not left Malaysia for his education.

To continue pursuing his passion for religion, Yeoh attended Harvard Divinity School for his Master’s degree, where he studied a variety of religions and specialized in political Islam in his final year of study. Yeoh said he chose to focus on political Islam as it is the predominant religion in Malaysia, and he wanted to understand it better.

“Coming from Malaysia, Islam is such a— there are so many different practices of Islam,” he said. “And so I really wanted to understand how different, how varied are these practices around the world and how it is used politically, socially.”

For the two-year duration of his Master’s, Yeoh worked for the Harvard Pluralism Project, which, according to its website, “studies and interprets religious diversity and interfaith relations in the United States.”

Per Cambridge Dictionary, pluralism is defined as “the existence of different types of people, who have different beliefs and opinions, within the same society.”

With wide eyes, Yeoh said his definition of pluralism, similar to diversity, is the concept that everyone brings a unique perspective.

“Pluralism means that we learn a lot from living in a diverse environment,” he said. “Without our unique perspectives, unique background and all of that, … it won’t be a rich environment that we live in.”

Yeoh said, as part of working for the project, he researched religious pluralism in the U.S. and religious sites in Boston, met the people working in them and learned about what they did. Yeoh also wrote about religious pluralism around the world, including in Malaysia, and translated religious works, such as an interview with a Buddhist monk.

Yeoh said his favorite parts about working on the Pluralism Project were speaking with religious scholars, leaders, practitioners and colleagues with the same interests and passion for spreading awareness about religious pluralism.

Yeoh said misunderstanding pluralism, including religious pluralism, can lead someone to “make judgments on things that [they] don’t know about.”

“If you don’t know about, about the wide arrays of religious practices out there, then you’ll use your own understanding of the world, or ‘What do I see from TV? What do I see from magazines?’ which is a very one dimensional view of, of a person, of a religion, of all that,” he said. “But then if you look into it, it’s just much, much richer.”

Following his Harvard graduation, Yeoh entered education, taking up a position in a private school in Boston where he taught a world religions class, among other responsibilities. There he discovered his love for working with kids.

After eight years in Boston, Yeoh then moved to London to join ASL in the social studies department. He currently teaches the social studies electives ‘Race and Culture’ and ‘Topics in Government and Law’ and said he hopes to teach a world religions class again at some point.

Tying it all together, Yeoh said his Catholic identity is what has led religion to play such a big role in his life.

“If it wasn’t for Catholicism, I wouldn’t – I could never tell you that it was religion that has inspired me to be who I am today,” he said.