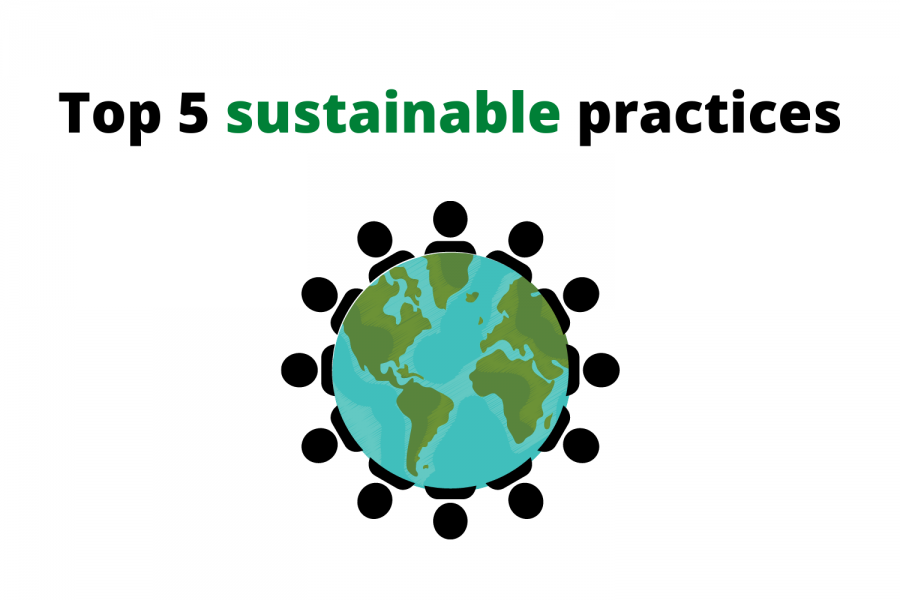 The effects of climate change – natural disasters, heat waves, pollution – remain perceptible in every facet of our lives. Here are five sustainable practices imperative to curtailing the worsening climate crisis.

Climate change – the effects of which are felt in every corner of the globe – undoubtedly permeates every facet of our lives. One word seems to shroud every conversation pertaining to the environment: sustainability. Whether through recycling, spreading awareness or reducing plastic waste, the rapid deterioration of the climate crisis emphasizes the need for individuals to adopt sustainable practices.

It is imperative we take steps to acknowledge and combat the imminent threat of climate change. While many grapple with the extent to which their individual actions will truly improve the planet’s health, the reality is that every change – no matter how small – spurs a more substantial difference than one may think. The following suggestions are attainable and effective methods one may take to reduce their carbon footprint and help ameliorate the climate crisis.

Headlines – including this article from the New York Times – promulgate the imperceptible pitfalls of red meat. In response, schools across the globe have implemented red meat reductions bearing resemblance to “Meatless Mondays” in the ASL cafeteria, per an article from the BBC.

Thus, choosing to reduce or eliminate red meat consumption has an undeniable impact on the environment. Replacing red meat with protein-rich alternatives – plant-based proteins, poultry, nuts, fish – is ultimately an easy change to implement that can go a long way.

Annually, humans produce around 300 million tonnes of plastic waste, per the United Nations. This unfathomable statistic serves as a reminder that utilizing reusable materials is a necessity often lost in the sea of environmental priorities.

Reusable water bottles, metal straws and reusable grocery bags are among myriad alternatives to plastic materials. Simply choosing fresh food products without plastic wrapping or bringing a metal straw to a coffee shop has a tremendous impact on slowing the effects of the climate crisis. If every individual were to make an effort to avoid materials containing plastic, excessive landfill waste would decrease drastically, rendering the environmental impact tangible.

Fast fashion – a nefarious concept – engenders detrimental consequences for life on our planet, particularly concerning marine and atmospheric pollution. Textile production claims its place as the third biggest manufacturing industry worldwide, and a value of $500 billion goes down the drain annually as a consequence of lack of recycling clothing, according to an article from the House of Commons Environmental Audit Committee.

The root of fast fashion lies in the expansion of consumerism. Companies have become desperate to keep up, turning to unsustainable methods of textile production – labor exploitation and pollution – to increase production efficiency.

Hence, the past decade has amassed a surge in customers purchasing unsustainable clothing for one-time use and rarely considering the environmental effects of the production process. Shopping at charity shops or exploring the “Good on You” website or app provides numerous sustainable clothing alternatives.

Living in a materialistic society, we are inundated with superfluous products in our daily lives. Whether it be old clothing, school supplies or other commercial products, most households are filled with unnecessary goods that hold the potential to further environmental health while simultaneously decluttering.

Recycling used items ultimately diminishes continual exploitation of natural resources, according to an article from “Friends of the Earth.” As the demand for novel resources decreases, environmental well-being increases. Thus, donating unused items to local charity shops or exchanging products with friends enhances sustainability and sets the stage for long-term ecological reform.

Amid incessant droughts and wildfires currently plaguing the U.S. and regions across the globe, conserving water is crucial to preserving the environment prior to the point of no return – when the effects of the climate crisis are rendered irreversible. Every individual relies on water for survival as it sustains food supplies, protects ecosystems and produces energy.

As someone who grew up in California during one of the most serious droughts of the 2010s, conserving water remains at the forefront of my mind. Experiencing a drought first-hand opened my eyes to the severity of the climate crisis and incentivized me to explore what actions I could take to combat its effects.

With the ubiquity of natural disasters, it is imperative individuals make strides to conserve water. Taking shorter showers, turning off water while brushing your teeth and limiting laundry loads are all viable means to restrict water use.