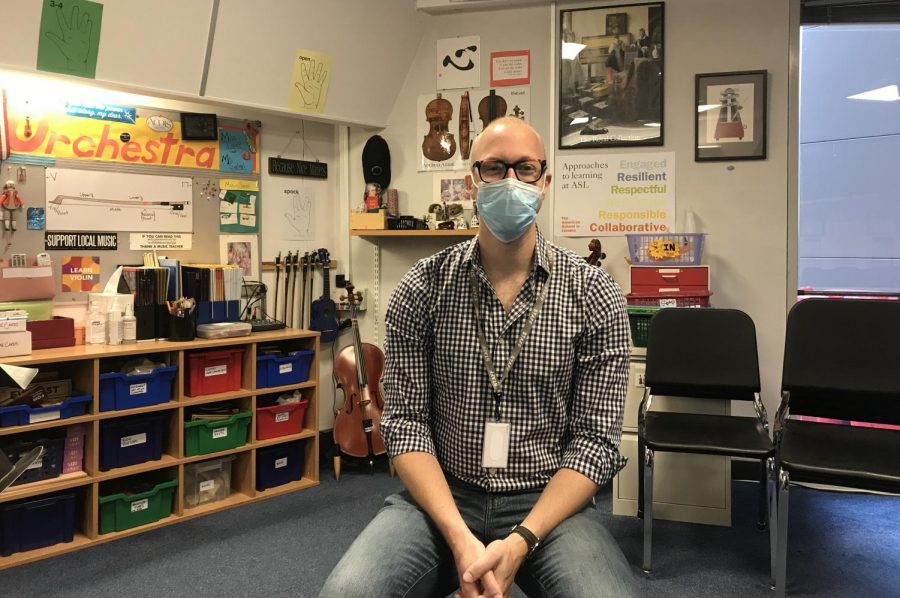 Dusty Francis MS and HS choir director stares at the camera. He previously lived in New York for 9 years before coming to London and considers himself adventurous due to his love of trying new things.

Born in Russia, Ohio, MS/HS Choir Director Dusty Francis said he fell in love with singing as a freshman in college.

“I had been a band kid all throughout high school and I knew I loved that,” he said. “I thought I wanted to teach it, and then I got to university and I sang in a choir for the first time and I was completely sold, right away.”

Francis’ identity extends beyond his career and passion for music. To describe himself in three words, Francis said he is “curious, adventurous and hungry.”

Francis said his curiosity toward new experiences and ideas has led him to explore a wide range of hobbies.

“Over the years, I have taken sewing classes and tap dance classes and learned new languages,” he said. “I’m a bit of a dabbler. I guess I really like trying new hobbies and learning new things along the way.”

Previously, Francis’ life, including his extensive hobbies, took place where he lived for 9 years, in New York City, however, Francis’ recent move to London spurred an interest in soccer, which he plays on Sundays. Francis said he also follows through with these commitments with the quote he lives by: “motivations follow discipline.” Francis said that you can’t wait to feel like doing something to do it, since it’s not going to be constant.

“I would like to try all these new things,” he said. “But sometimes I fall off the wagon a little bit because I don’t feel like doing it anymore even though I know that you can’t rely on feeling like doing it.”

Yet his move to London didn’t only spur a new interest in soccer and an introduction to a new school; to Francis, his move signalized a new start.

“Post-university, there aren’t a lot of built-in times in your life where you get to hit reset, but a move to a new country sort of feels like one,” he said. “So I’ve been trying to be really open to new experiences and I think I’m succeeding at that.”