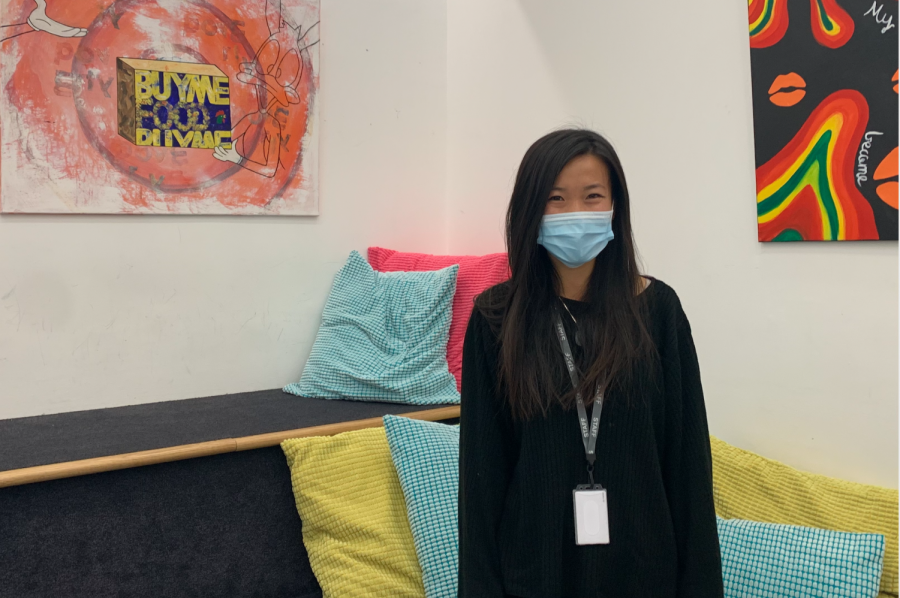 English teacher Joy Xu stands in the corner of the English pod. Xu said she has a special appreciation for the international perspective after living in multiple countries and serving as a DEI chair at her last school in San Francisco.

English Teacher Joy Xu is the newest member of the english department. As for where she is from, Xu said “it’s complicated.”

Xu said she has lived in 12 different cities around the world, so moving to London from San Francisco was not her first big move.

“Culturally, I’ve always been so amorphous,” Xu said. “I’m used to moving and adapting to new cultures so the dynamic there hasn’t been as much of a shock.”

Having attended international schools growing up, Xu said she has always been “caught up” in her identity as a third culture kid – a term that describes someone who has grown up in a culture different from their parents, per Merriam-Webster. She said her ideas and values around home and culture inform her teaching and how she interacts with her students, especially in a school with students from many different cultural backgrounds.

“Part of it is understanding that a lot of students at ASL have a really complex relationship with home and meeting students where they are,” Xu said. “I’m always trying to consider everyone in a room and where people are coming from and whether the work we’re doing is meaningful.”

Xu said English may not have been an obvious choice of subjects to teach because English is her third language. However, she said she was drawn to the subject after finding many of her experiences reflected in literature.

“It was coming across stories that both reflected my experience and reflected complexity,” Xu said. “Even if they weren’t about this Asian immigrant experience, but this idea of being stuck between two worlds, or this idea of systemic structural racism … I just found a real power in words, and it’s magical being able to share that with others.”

In addition, Xu was a Diversity, Equity and Inclusion chair at her previous school and carries those beliefs surrounding equity and inclusion into her classroom. As a guiding principle, Xu said she asks herself, “who is the most vulnerable or least heard voice in a room and how do we make them feel?”

Overall, Xu said her outlook both in and out of the classroom tends to be positive, and she hopes to share this attitude with her students.

“You have to be optimistic to make it through this world,” she said. “I used to always tell the kids, ‘we’re doing the best we can with what we have.’ And I try to live by that as much as possible.”