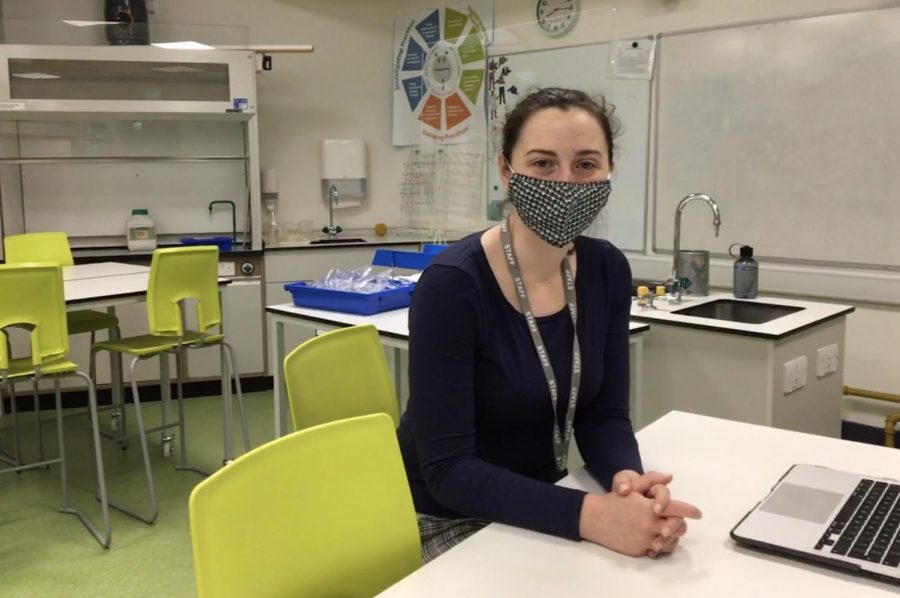 HS Science Teacher Corinne sits in science classroom W-302. Morgan has lived in London for six years and is new to ASL this year.

HS Science Teacher Corinne Morgan hails from Richmond, Virginia, and has also lived in Western Massachusetts. She said she moved to London six years ago to complete her master’s degree, a city she now considers home.

Morgan said although it is very culturally different from the U.S., she loves living in London due to its unique environment and values.

Morgan said a chance job opening compelled her to teach science, after a period of teaching while attending university.

“My friend was a French teacher at a local school, and their biology teacher just quit in the middle of the year and she called me and she was like, ‘Do you want a job tomorrow?’” Morgan said. “I went, ‘sure,’ and I came in and started teaching science, biology, and then chemistry and forensics the next year, and I just really loved it.”

Morgan said what she loves most about science is that it’s a creative subject. Although she said others may view the subject as the opposite, Morgan said open-mindedness is essential for problem-solving and understanding how the world works.

“A lot of people don’t look at science as creative, they look at it as a lot of facts to memorize or problems to learn how to solve,” she said. “But in reality, it’s, you know, all of that got figured out because someone was really creative in what they were applying their knowledge to, and that’s how we move science forward and that’s where invention comes from.”

When asked what her favorite type of science is, Morgan said she likes biology, which she has a degree in, and she also “fell in love” with the field of forensic science.

Furthermore, Morgan said her two goals for the school year are to get to know the school community better and to help show her students that science is discovery.

Morgan said rather than one person lecturing information, science is more about individuals learning through examples and discovering the truth for themselves.

“If you get told something, it doesn’t mean anything,” she said. “You have to find it out for yourself.”

Aside from science, Morgan said she enjoys playing video and board games and baking in her free time. She also said she enjoys all food – except tomatoes – and her favorite foods to bake are sweet breads such as cranberry orange bread.

“I have friends staying with me right now. We’ve just been playing card games, and I learned a Soviet-era card game from my Russian friend last night,” she said. “It’s weird. There’s no winner, there’s just a loser. And it’s literally the name of the game. It’s loser.”

Outside of the classroom, Morgan said she also has a passion for dance, which she doubled in for her undergraduate degree in addition to biology.

Ultimately, Morgan said her personal motto is, “If you’re scared, it’s good.” She said she defines the word “scared” for her motto as being worried or nervous about trying something difficult. Although she said this feeling may be challenging, it means one is persevering and will eventually triumph.

“If you’re scared, if you’re nervous about what you’re doing, it means that you’re, you’re pushing yourself to do things that are challenging and good for you,” she said. “And that little bit of nerves means that you’re on the right track.”