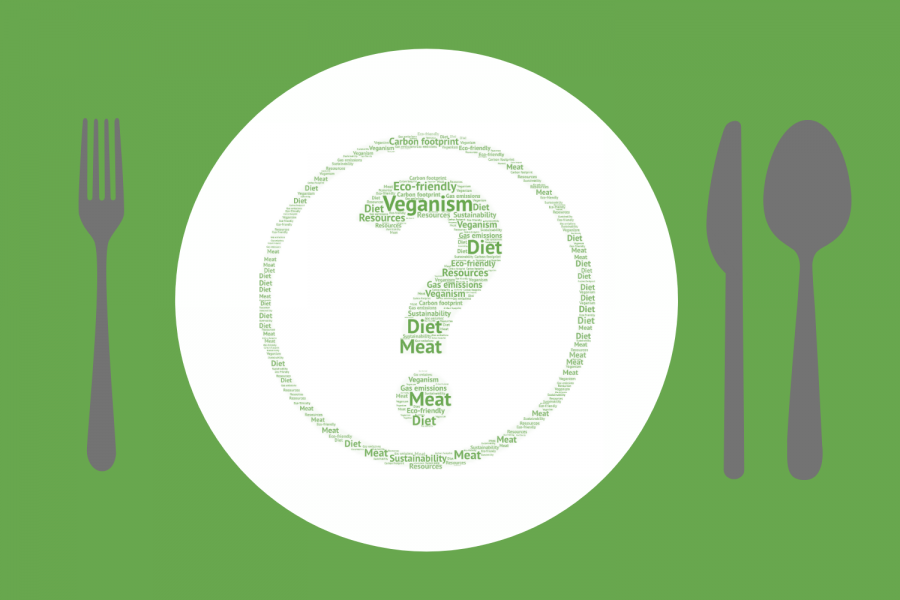 While veganism has become increasingly popular over the last decade, not much change has followed regarding society’s fixed mindset on the subject. After reducing my consumption of animal products these past few months, I have noticed various negative reactions to my new diet, despite its positive ecological impact.

Welcome back, readers! As you may know from prior articles in this column, one of the most effective ways people can reduce their carbon footprint is by curating an eco-conscious diet. Thus, over the past five months, I have minimized my consumption of animal products and eaten more plant-based meals when possible.

To my surprise, sticking to this sustainable regimen has not been challenging due to the variety of vegan-friendly food options available. In recent years, grocery stores and restaurants have accommodated the growing vegan population, increasing accessibility to plant-based foods.

Nevertheless, I notice many eye rolls and raised eyebrows when informing people of my decision to follow a more vegan-oriented diet. While one may believe that food brands are becoming more vegan-inclusive, society has not entirely grown accustomed to normalizing veganism.

So, why is there such a stigma around veganism? It has to do with meat consumers’ repressed guilt regarding animal cruelty and a psychological rationalization commonly referred to as “the meat paradox.”

The meat paradox was a concept developed by Leon Festinger in 1957 that suggests an individual prefers to disassociate with the negative impacts of consuming meat to feel morally better about eating it. Humans are psychologically programmed to use techniques such as mentally separating the meat from the living animal and purposefully ignoring where their food comes from to avoid feeling guilty.

The psychological tendency is supported by studies that have reported those who do not purchase animal products for animal cruelty reasons are least supported by meat consumers.

As someone who originally reduced my meat intake to lower my carbon footprint, this ideology rings incredibly true. Once I was invested in a more plant-based lifestyle, my meat paradox boundaries began to break down. It was then when I truly realized how imperative veganism is for not only the environment but animals’ quality of life. Yet, I never would have started thinking in this manner had I not become a vegan.

I have seen firsthand the different reactions people have when one states they are a vegan; the mentality of opposing animal cruelty almost always receives a vast, dramatic response.

Now that the stigma has been identified, we may also look at how veganism also has some very positive correlations to sustainability. From conserving natural resources to reducing greenhouse gas emissions, going vegan is one of the most environmentally friendly actions one can take.

Every person who adopts the vegan lifestyle prevents the waste of more than 200,000 gallons of water per year, part of the extreme quantity of water dedicated to animal agriculture.

Furthermore, animal agriculture is one of the largest contributors to high greenhouse gas levels, generating over 14% of the world’s total emissions. Meanwhile, research indicates the vegan diet produces only half of the agricultural greenhouse gases a meat-consuming diet produces.

It is also predicted that if everyone becomes a vegan, greenhouse gas emissions will reduce by 70%. This number is high enough to mitigate much of the further global warming to come and restore environmental damages caused by climate change.

On the other hand, it is worth noting the practice of growing various types of fresh produce will require immense amounts of water, meaning that vegan diets are not without flaws. However, if one can avoid frequently purchasing water-intensive crops (for instance, avocados and mushrooms), veganism remains the most eco-friendly dietary option.

While evidence suggests there are many health benefits to eating vegan, an imbalanced diet can lead to its own health issues.

The risk of being diagnosed with a nutrient deficiency, specifically iron, increases when switching to a vegan diet as plants produce less bioavailable compounds.

Additionally, soy is a common supplementary protein source in plant-based food, but excessive consumption of the substance can lead to hormone interference.

That being said, one can still adapt their diet to be more sustainable – while remaining safe – if they are mindful about consuming all the essential nutrients. Quinoa and lentils are both excellent examples of high-protein and iron-rich foods that will not cause a chemical imbalance like soy may.

Below is an example of a breakfast, lunch and dinner recipe that is mindful of the environment:

It is crucial to remember everyone’s bodies are different, and in order to stay healthy, we must listen to our bodies’ needs.

Nonetheless, we all have a responsibility to preserve the environment whenever possible – from going vegan to adopting Meatless Mondays to cutting out red meat.