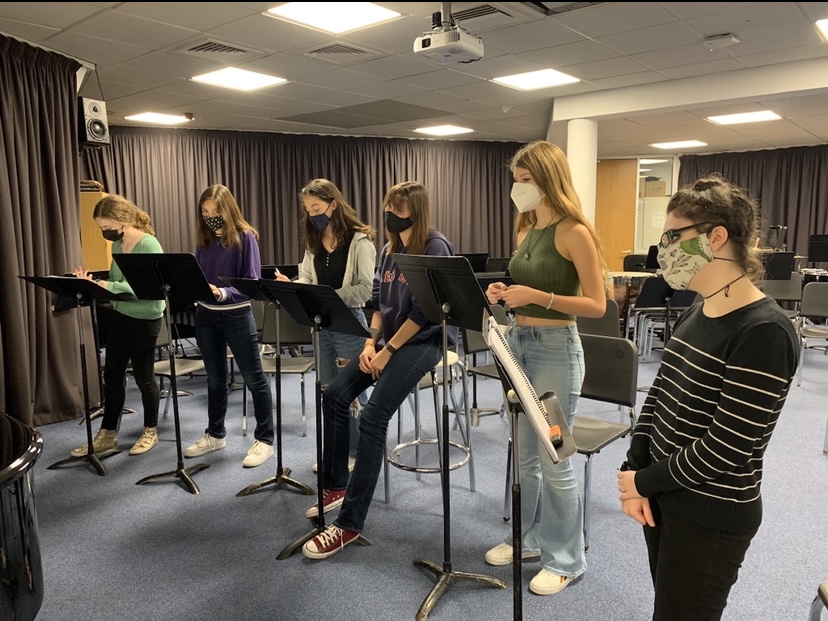 "Footloose" cast members practice choral arrangements during rehearsals. Performers have practiced for the past month in preparation for opening night Nov. 17.

After an abnormal year for High School performing arts during which they published a video broadcast of “Fame: the Musical” and performed socially-distanced choir and acting performances, students are now permitted to step foot on stage and perform unmasked, similar to circumstances prior to COVID-19.

This year, the Performing Arts Department selected the musical “Footloose” as the annual performance.

Choral Director Lisa Ross said the musical selection process is extensive and was guided by student interest and transitioning to a normally-formatted production after most COVID-19 restrictions have been lifted.

“We consider the school’s climate, the sort of zeitgeist of society, how people are feeling and then we think musically what’s appropriate given students didn’t perform last year,” she said.

“‘Footloose’ just sort of seems to fit all of that, where we felt we needed a bit of escapism and yet it’s still relevant to teenagers.”

“Footloose” is a coming-of-age story following protagonist Ren after his recent move from Chicago to the small town of Bomont, West Virginia. He quickly learns that this town has banned one of his greatest passions: dance. With the help of his two friends, Willard and Ariel, Ren hopes to reintroduce dance by attempting to throw a prom. However, they must first convince the town council headed by Ariel’s conservative father, Reverend Shaw Moore.

Danna Rubesh (’22), who plays Vi Moore, Reverend Shaw’s wife and Ariel’s mother, said she was thrilled when the musical directors announced “Footloose” as the musical.

“I was very excited because it’s a classic,” she said. “I loved the original movie with Kevin Bacon and I’m just really excited for another ’80s musical.”

Auditions commenced shortly after the start of the school year, with initial tryouts taking place Sept. 6 to 8 and callbacks Sept. 9 and 10. The final cast was announced Sept. 12.

In the audition process, students presented a song of their choice and performed specific scenes or monologues, per Ross.

Sam Hamilton (’23), assuming the role of Coach Dunbar, said although the audition process was nerve-wracking, it was effectively organized.

“The audition process was definitely a little bit intimidating,” he said. “But they split us into groups which I liked because it made it less stressful and it means you’re performing in front of a smaller group of people.”

Rehearsals began Sept. 13, promptly after auditions. Rubesh said rehearsals aim to focus on either singing, dancing or blocking. While a lot of content is covered in these rehearsals, Rubesh has appreciated the process.

“It’s quite intense but I really enjoy rehearsals,” she said. “It’s like the highlight of my day.”

Hamilton said initially, only certain characters were called to attend rehearsals depending on their appearance in scenes. Now, he said full cast rehearsals have become more frequent as the opening night approaches Nov. 17.

Moreover, Ross said her favorite part of “Footloose” has been returning to the live theater since COVID-19 halted the typical structure of the production.

Likewise, Rubesh said she has enjoyed the face-to-face connection the production has facilitated thus far.

“I love the cast because it’s a really great group of people and it’s been so long since we’ve done a show in person, so it feels like a really connected ensemble,” she said.

Similarly, Ross said these connections built with others as well as the self-awareness gained leave an indelible impact on performers.

“Our ultimate goal is always for ASL students to use this process to better understand themselves,” she said. “That’s the beauty of the arts – it’s a mechanism to understand yourself and your identity.”