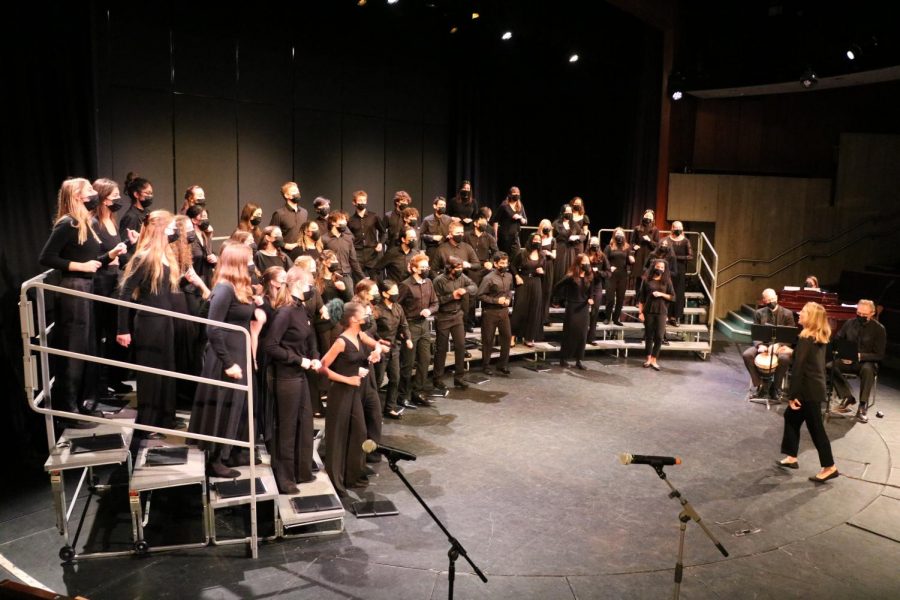 The High School Concert Choir, directed by MS/HS Choral Directors Lisa Ross and Dustin Francis, performs its first in-person concert since 2019. Members of the school community were able to gather in the School Center and watch the live performance.

For the first time since 2019, the High School Concert Choir performed in person in the School Center Oct. 28.

Kiera Agyei (’23), who performed a solo act during the concert, said she enjoyed performing in person and engaging with an actual audience again.

“It was just so nice to see everyone’s parents in person and just have the choir all together,” she said. “I really missed performing in front of live audiences.”

Additionally, Apollina Barattieri di San Pietro (’23), a member of the choir, said the lack of opportunities to perform in person due to COVID-19 restrictions made performing in front of an audience more meaningful.

“After the pandemic, the choir hasn’t had an opportunity to perform on stage,” she said. “It was honestly just so much fun to be able to just perform again and be all together as a choir as last year we were split up into groups.”

World Languages and Cultures Teacher Tamara Smith said she and other audience members, specifically parents, had an incredible experience watching the concert in person.

“Not only were the singers so excited to be back on stage for the first time in two years, but the audience was equally excited to be assembled for the first time,” she said. “From the perspective of parents, who weren’t even allowed in the building, being allowed in the building again and coming together as a parent community on so many levels made it a momentous day.”

In addition to the performance being the first in-person concert since 2019, it was also the first ever choir concert to take place in the fall.

Barattieri di San Pietro said she thinks the reason for having a fall concert was that the choir directors wanted more opportunities to perform.

“I assume that since the concert choir hasn’t had an opportunity to perform in so long, [MS/HS Choral Director Lisa] Ross wanted to create as many opportunities to do so,” she said.

Agyei also said she thinks the possibility of COVID-19 restrictions tightening during the winter incentivized the choir directors to bring the community together as soon as possible.

“Now that we have the opportunity to have live content, they want to do it as quickly as they can,” she said. “With the uncertainty of what might happen in the winter, they definitely wanted to bring people together as soon as possible.”

According to Smith, the entire audience and choir, except for key soloists at brief moments, were masked.

Agyei said that even with the expectation of mandatory masks, she still enjoyed being able to perform in person.

“When we got the rules to take off masks, we already knew that we were going to have them in this auditorium … because there were so many people that were in that auditorium space.” she said. “But it was just a luxury to be able to do a concert at all.”

Agyei said she appreciated being able to show the ASL community what the choir had been working on last year. However, she said virtual performances do not compare to live concerts.

“I was glad that we still had some method to show the parents what we were doing, but it definitely was not the same experience as you don’t have the same sense of community,” she said. “It also feels like people don’t know as much about it, and I can understand not wanting to have to look at your laptop for that long or watch it online.”

Barattieri di San Pietro said recording the concert was nothing like performing in front of a live audience.

“A huge part of performing is the rehearsals and the moments before you go on stage where you feel those nerves and know that you have only one shot to do it,” she said.

However, Smith, who had not been able to see what the choir had been working on for an entire year, said she was grateful for the choir’s virtual concert in 2020.

“As a community, we were so thankful for anything that we could access and that anything that was put out from the performing arts department was received with a sense of gratitude realizing the creativity, the ingenuity, the resilience that went into creating it,” Smith said.

Looking ahead to the coming months, Barattieri said she hopes the situation regarding COVID-19 will continue to improve and that the choir will be able to perform in front of an audience again.

“Hopefully, it only gets better instead of getting worse and that we can continue to be able to perform, hopefully without masks, so we can really get back into the full groove of things,” she said.

Additionally, Agyei said she wants past choir traditions to return as COVID-19 restrictions continue to relax.

“The choir has a lot of traditions … like singing the Hallelujah chorus with the orchestra, the winter concert, and some of the things that we weren’t able to do at graduation,” she said. “I just hope that we’re going to be able to do that again.”