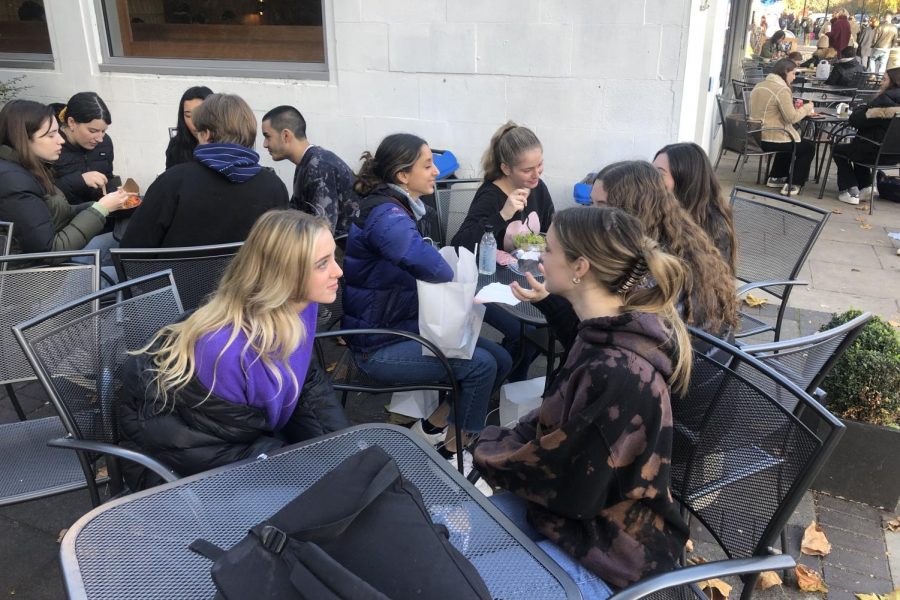 High School students converse on St. Johns Wood High Street without masks Nov. 17. Due to rising COVID-19 cases, the government has been pressured by the British Medical Association to re-introduce more restrictive and preventative measures similar to those in place throughout the rest of Europe.

Currently, the U.K. records an average of over 30,000 new COVID-19 cases daily, per gov.uk. This is almost double what was reported in November 2020 while England was under national lockdown.

According to the European Centre for Disease Prevention and Control, the U.K. has the highest rate of daily infections in Europe, whereas countries like France register an average of 10,000 new cases per day and Germany an average of 20,000.

As a result of the significant number of cases, British Medical Association Chair Chaand Nagpaul is calling for the U.K. government to implement more social distancing restrictions. In addition, the World Health Organization has warned that vaccine distribution alone will not curb the pandemic. Rather, it must be coupled with other measures such as mask-wearing in public settings.

Samih Sawiris (’23), who recently visited France, said he noticed the restrictions were far more limiting than those in the U.K.

“Whenever we visited any restaurants or any museums and things like that, we had to show proof of vaccination and wear a mask at all times,” he said.

Currently, wearing masks to enter public spaces or providing proof of COVID-19 vaccination  remains a government-mandated requirement across most of the EU, per the Independent. Meanwhile, in the U.K., since July 19, proof of vaccination is not required. And aside from public transportation, mask mandates and social distancing rules have been removed.

For example, Sawiris said he has noticed that in contrast to France, the government guidelines in the U.K. seem to be simmering down.

“No one [in the U.K.] controls whether you are vaccinated or not and barely anyone wears masks anymore,” he said. “Here it almost feels like the pandemic is over.”

Moreover, Anand Vandrevala (’23), who spent time in Greece over the summer, said he felt he could not entirely enjoy his holiday because of the limiting restrictions. He said he is grateful to live in England where he feels there is more freedom.

“The COVID-19 restrictions in Greece were very harsh,” he said. “You couldn’t meet in groups of more than 6 people which was disappointing as I could not see all my friends and make the most of my time there. Basically everything is open in England and I am happy to be here now where I don’t have so many limitations.”

ASL Board Member and London School of Economics Professor Chris Anderson said one of the reasons the U.K. has so few restrictions is specific to its political system.

“British governments, historically, have been reluctant to involve the state too much in people’s lives and in business activities … regardless of who’s in government at any given point in time,” he said. “France, especially, is known as a state playing a really strong role in people’s lives.”

“The government is very reluctant to interfere in business activity,” he said. “They represent the people who want less government interference.”

According to the Independent, a significant number of cases of COVID-19 in the U.K. can be attributed to a number of factors beyond those that Anderson flagged. Such factors include waning immunity since the U.K. was one of the fastest countries to roll out the COVID-19 vaccine, and its wide distribution of AstraZeneca – one of the vaccines with lower efficacy.

While Anderson acknowledges the different possibilities, he said it is difficult to pinpoint exactly why infection rates are currently higher in the U.K. compared to other European countries.

“We have some hypotheses that have to do with the fact that we believe the U.K. opened up earlier than some of the other European countries,” he said. “But we just don’t have enough data yet to really know whether it’s about a specific vaccine or whether it’s about the behavior.”

Despite the British Medical Association requesting the re-introduction of social distancing measures, the U.K. government has decided to hold back from issuing more restrictions.

Anderson said this is likely linked to both the government’s free market ideology as well as the fact that hospitalization and mortality rates haven’t increased in the same way that infection rates have.

“My sense is that, politically speaking, infection rates are easier to manage than mortality rates,” he said. “So long as mortality rates don’t spike … it is more palatable to try and balance public health and the needs of the business community.”

Anderson believes that the government is trying to avoid restricting economic activity, even if this comes at the cost of an increase in infection rates.

“It’s okay to have a few more infections so long as we don’t do economic harm,” he said. “Shutting down businesses again or just mandating too many things for businesses to do would restrict economic activity.”

Vandrevela said he agrees with the government’s approach and that businesses should remain open as long as the COVID-19 death rates remain relatively low.

“We should keep businesses open… even if the rate of the virus is spreading quite quickly, I think we really do need to look at the death rate specifically to make decisions on COVID-19 restrictions.”

According to gov.uk, while infection rates are still high, mortality rates are much lower than this time last year. Anderson argues that mortality rate is the key indicator that could lead Prime Minister Boris Johnson to change course in regard to the national COVID-19 regulations.

“The question really is ‘What will they do or what would they do if mortality rates indeed increase as well?’” he said. “And that we don’t know yet.”

Finally, Anderson said the government also does not seem to face much political pressure to issue more restrictions. He said, so far, the ongoing fluctuation in the pandemic’s infection rates has not seemed to affect Boris Johnson’s popularity.

“At the moment, he is still broadly popular, certainly within his own party, and the opposition has not been able to take advantage of that yet,” he said. “The question is whether at some point they will get tired of how it’s been managed.”

Moreover, Anderson said unless mortality rates suddenly increase significantly, he does not predict that there will be another national lockdown instated.

“The government is going to try to avoid another lockdown at all costs,” he said. “The only condition under which they would enforce another lockdown would be if mortality rates went up significantly, in such a way to put a really significant strain on the National Health Service.”