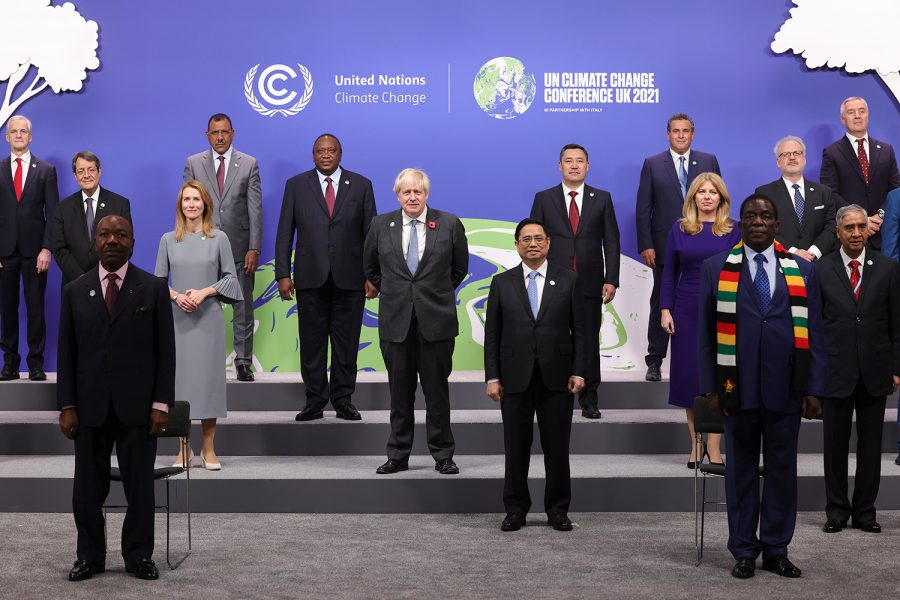 World leaders pose for a photo at the 2021 United Nations Climate Conference. Attendees from each country face public pressure to mitigate the effects of the climate crisis.

The 2021 United Nations Climate Change Conference, commonly referred to as COP26, occurred from Oct. 31 to Nov. 12 in Glasgow, Scotland. According to the BBC, it was initially due to take place in 2020; however, as a result of COVID-19 restrictions, it was postponed.

Sustainability Council Co-President Skyler Sweidan (’22), who followed the summit, describes it as “a forum for conversation.” She said she is disappointed that the action only now being taken against the climate crisis is long overdue, and world leaders’ behavior throughout the conference seemed performative.

“We don’t have time to faff about anymore,” she said. “We are even less on track than we were beforehand, and a lot of the agreements feel either like empty promises or actively being like ‘I don’t care.’”

Owen Humphries (’22) said he agrees with Sweidan and feels frustrated that world leaders’ promises concerning climate change are non-binding. In other words, he said there seem to be no consequences for not abiding by certain agreements.

“I haven’t been able to find a single government that I can think of that has fully committed to it and kept every promise they have made,” he said. “I don’t want to bash Bhutan, which is the only carbon negative country in the world, but there isn’t a single developed country in the world right now that I think is doing enough.”

In addition, Humphries said the U.K. hosting this year’s summit feels “a bit performative and hypocritical when there’s still a lot for them to be doing.”

Not only did world leaders attend the summit, but so did climate activists such as Greta Thunberg and Sir David Attenborough. Sweidan said the presence of activists at the conference was crucial in ensuring that changes were made.

“They have high influence over what we as the public demand and what we hold our governments accountable for,” she said. “So it’s important to have a diverse range of activists so that people know what we need to demand from our governments because without that knowledge, I wouldn’t know how to use my voice.”

While there are no direct ramifications for governments ignoring the climate crisis, according to the BBC, over 100 delegates at the summit have pledged to take the necessary steps in order to end deforestation by 2030.

In addition, more than 30 financial corporations have taken action by agreeing to discontinue their investments linked to deforestation activity, per the BBC. This agreement includes £14 billion in private and public funding, some of which will go towards developing countries to restore damage, tackle wildfires and  support indigenous communities.

Science Teacher Marisa Wilson said she believes that in order for there to be real change, there must be some monetary value alongside agreements made. She said otherwise, because the contributions toward ending deforestation are voluntary, there is no incentive for leaders to stick to their vows.

According to ukcop26.org, at this year’s summit, leaders collaborated to finalize the rulebook of the Paris Agreement from the United Nations Climate Conference in 2015, COP21, which occurred in Paris, France. The agreement is a legally binding treaty adopted by around 200 countries who vowed to pursue efforts to ensure that the global temperature remains well below 2 degrees celsius relative to pre-industrial revolution levels.

Wilson said while COP26 has initiated progress, she believes that COP21 was crucial in ensuring the world heard from countries who suffer first-hand from the effects of the crisis.

“The discussions were that actually we should be aiming for lower than two degrees celsius,” she said. “Two degrees celsius would mean the loss of a number of island nations. So the poor countries were coming in and saying two degrees is essentially suicide for us. The voice of the countries that really were being affected by climate change was louder.”

In order to address the major themes throughout this year’s summit, Sweidan said SusCo is working alongside the administration toward minimizing the school’s carbon footprint through a variety of events and activities. She said these activities include hosting a climate summit and working with the cafeteria to provide more vegan options.

“We want the drive for sustainability and environmental consciousness to come from within this community and be shown outward, like, really authentically come through,” she said.

In addition to working with administrators, SusCo organized a lecture by environmental activist and writer Rob Hopkins. Students met with their advisories to listen to Hopkins speak about COP26 and the importance of reducing carbon emissions Nov. 15.

Humphries said he particularly enjoyed listening to Hopkins speak and appreciates the way in which he brought awareness to the pressing issues addressed at COP26.

“It was very interesting to look at community action rather than this idea of ‘we need broad sweeping action,’” he said. “I like how he made it clear that individuals may not be able to do a lot by themselves, but it takes a small group of people to make a pretty big difference, at least in a local area, which I thought is definitely quite empowering.”

Overall, Sweidan said COP26 inspired her to continue taking immediate action through both her work on SusCo and in her day to day life.

“For a long time, I’ve been like, ‘there’s nothing I can do,’” she said. “But COP terrified me and now I have a little fire. I hope that is the same for other people because I think feeling grief and feeling scared is really important for making change.”