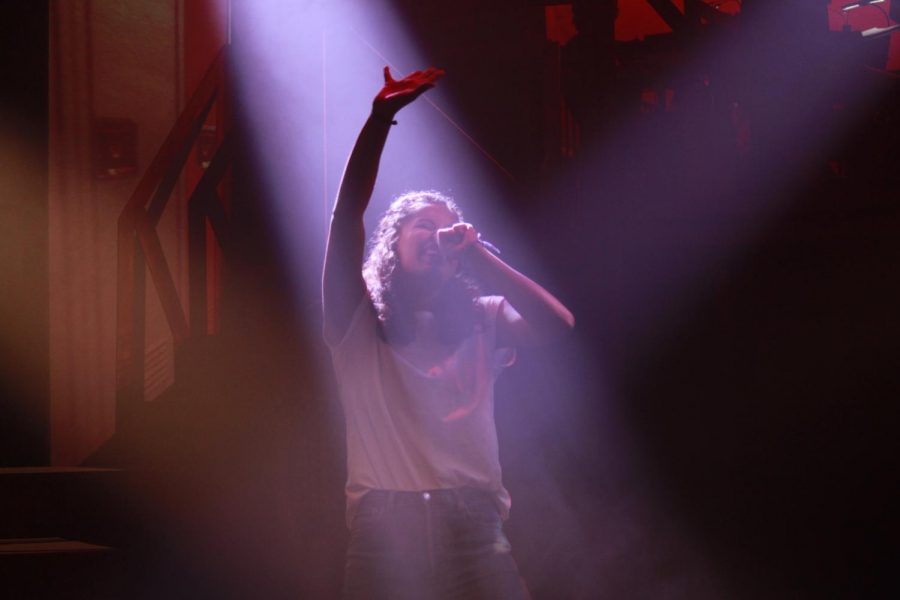 The spotlight shines on Ruby Read (’23) as she performs a solo in the School Center during the first performance Nov. 17.

After months of rehearsals, the High School production of the musical “Footloose” commenced on stage for a live audience Nov. 17 to 20. The school’s modern rendition of “Footloose” recounts the story of a teenager fighting for the freedom to dance in the small town of Bomont.

Ruby Read (’23), who assumes the role of protagonist Ren McCormack, said she was drawn to “Footloose” on account of its acclaimed dance numbers.

“I know some people were put off by all the dancing, but I was so excited because it’s such a different change of pace,” she said.

Likewise, ensemble member Antonio Reis (’25) said after the isolation of lockdowns, dance in “Footloose” exemplified a feeling of community.

“We’ve been cooped up inside for so long, sometimes it is a good idea to just go and dance,” he said.

Although in-person performances were permitted after an abnormal year with pandemic restrictions, several cast members contracted COVID-19 infections a week prior to the scheduled performances, which altered the production process.

“When you’re rehearsing it you’re kinda just, like, learning the basics and it’s kind of annoying because you don’t know it,” she said. “Then once you have everything down and you’re actually performing in front of an audience, you have this, like, amazing adrenaline rush and it’s just incredible.”

In addition to the time expended on rehearsals, Performing Arts Teacher Todd Sessoms said the performing arts department utilized casting choices to differentiate the show from its traditional form.

Read assumed the lead role, typically played by a male, and said she considered the switch in gender a significant aspect of the musical.

“We had to be purposeful and the intent had to be meaningful when we switched,” she said. “It wasn’t going to be something we ignored.”

Sessoms said the decision to cast the traditionally white, male lead as a woman of color helps “to break the story out of the early ’80s.”

In addition, Read said transcending race expectations furthered her ability to play the role as she shares the experience of her character struggling to adjust to a town in which she feels ostracized.

“Growing up in white communities and stuff like that I am able to connect myself in that way, like physically looking different,” she said.

“Chuck has a solo called ‘Girl Gets Around.’ It’s kind of sexist, kind of misogynistic, so it’s been changed into a duet,” he said. “It becomes a song of empowerment.”

Claire Heskett (’22), who plays the rebellious reverend’s daughter Ariel Moore and Ren’s love interest, said although the outlaw of dancing may seem trivial, the plot represents “something so much bigger.”

Read said she echoes the notion that the musical holds deeper meaning through inclusion of social justice issues present today, noting “they all still exist” and “there’s a lot of lessons we can take from this simple musical.”

Even so, Heskett said many of the battles characters face are fought internally, which she found a difficult aspect to portray on stage.

While Sessoms said underlying themes add gravitas to the musical, he said it was crucial the “triggering” moments did not spur discomfort for actors. He said scenes of physical assault required additional sensitivity.

“It’s something we have to have a lot of intention and mindfulness around and that we really have to scaffold up, that we have to structure up,” he said.

“It’s shown me that it’s almost on the individuals and the people within the community to be aware of what’s going on around them in their society,” she said.

“In high school, students are craving these conversations,” he said. “Students want to be active. Young people are passionate about the place in the world that they see themselves or that they envision, and need outlets in order to be able to have those conversations in safe and appropriate ways.”