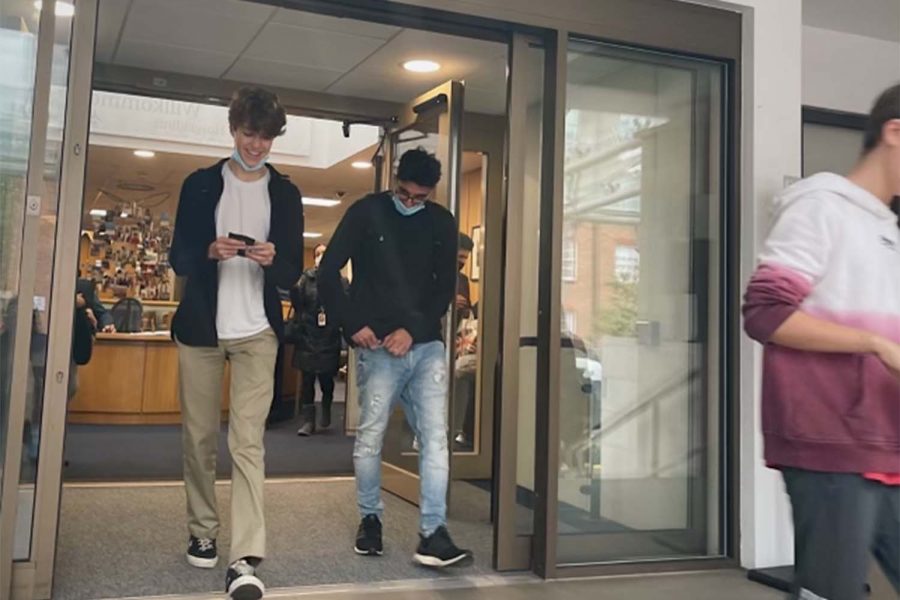 Guillermo Basterra (’22) and Soham Bhavnani Thadani (’22) leave school from the Waverley entrance at the end of the day. Amid the integration of diversity, equity and inclusion work into the High School curriculum, students voice concern surrounding the media’s portrayal of these changes.

Following the announcement of Head of School Robin Appleby’s resignation, several publications, including the Daily Mail, The Times, The Telegraph and The New York Post, published pieces about her departure and the ongoing conversations surrounding diversity, equity and inclusion work within the school. Appleby’s resignation was announced in an email from the Board of Trustees Nov. 19.

These stories contained criticism about the school’s implementation of DEI work. The Daily Mail in particular referred to Appleby’s resignation as the “Downfall of Britain’s WOKEST head” in an article Nov. 26.

Some students perceived the media’s coverage as exaggerated and largely inaccurate.

Raaghav Aaditya (’23) said the media’s portrayal of the school was blown out of proportion and did not consider the general student opinion.

“When I initially read it, I thought it was kind of misrepresenting what ASL actually is because they kind of took it to an extreme and they exaggerated what was actually happening,” he said. “They didn’t necessarily take into account the student perspective.”

Similarly, Alexandra Braun (’24) said she feels there is a general sentiment within the community that the media is misrepresenting the school.

“Everyone’s a bit tense because the articles are dramatic apparently,” she said. “And so I think that everyone’s kind of annoyed that this fake version of our school is being put out there.”

Meanwhile, Zein Blanks (’22) said the media has made students and faculty feel uncomfortable and afraid to speak out.

Blanks also said the coverage would have painted a more complete picture if the media had taken into account the student perspective.

“Ask the students because this whole thing has been parents and teachers and media outlets,” she said. “Speaking on behalf of the student population that has lost its voice because of them, it’s a vicious cycle that they’re just perpetuating.”

Additionally, Rishi Kurada (’23) said it upset him to see the media portray the school in a negative and distorted manner.

“This is my seventh year here and ASL is such an important part of me, so it is obviously a bit hard to see a lot of like reports maybe exaggerating the situation or conflict that’s occurring,” he said. “It is a bit hard on the students as well to carry on with this.

Braun said media outlets in general often dramatize the truth in an attempt to attract readers.

“They talk about other people and make sensationalized stories about these people as a means of … getting more readers,” she said. “Because a boring story is not going to sell so of course they’re going to make it more dramatic.”

In addition, Blanks said she is disappointed about the lack of communication and context provided within the media’s coverage.

“There’s a huge problem with – A – miscommunication and – B – a ton of quotes being taken out of context, because at the end of the day, context is everything,” she said. “And with the media just like putting in random words or random phrases without framing them … it’s upsetting to see.”

Aaditya said although it has been difficult to wrestle with backlash from the media, the school has done well implementing DEI work within the school.

“ASL has done a good job with DEI, and I mean obviously there have been issues in the past year or so, but I think on the whole, DEI is something that every organization and every institute should be striving to achieve,” he said. “As a school, as students, faculty and parents, we need to work together to resolve these issues and achieve the most equitable school that we can.”