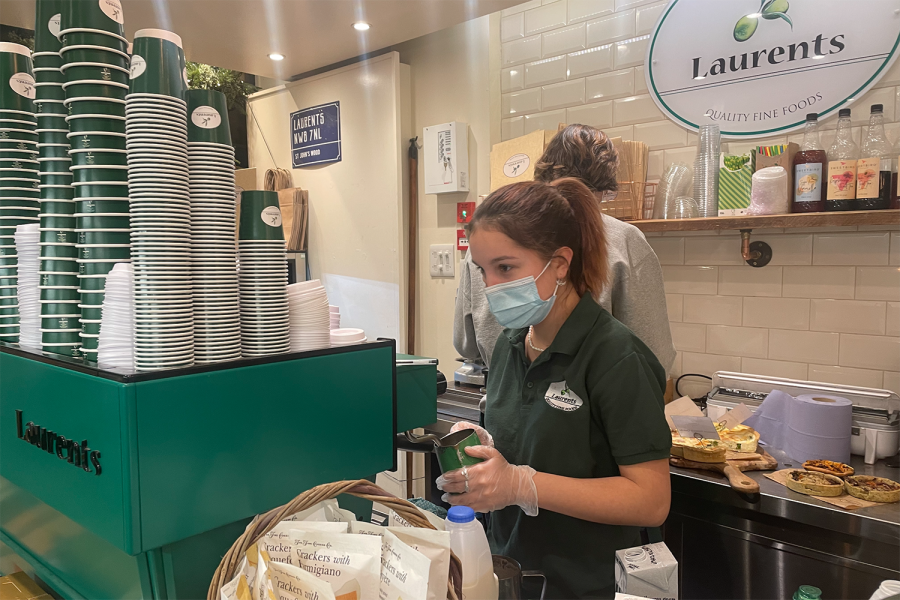 Sophie Galuga (’23) prepares a coffee order at Laurents on St John’s Wood High Street. She has worked part-time as a barista and sales assistant at the deli since Aug. 12.

At Laurents Deli after school, one may see a familiar face working behind the till or making their coffee.

Sophie Galuga (’23) said she has a part-time job as a barista and sales assistant at the Laurents Deli on St Johns Wood High Street. She said her job consists of serving customers, making drinks and cleaning.

Jan. 12 marked the fifth month Galuga has held her position. She started her first shift Aug. 12, 2021 after applying during the week after she moved to London Aug. 1. Galuga said she works three five-and-a-half hour shifts from 3:30 p.m. to 9 p.m. during the school week. However, this number usually increases to four or five including weekends to cover for absent coworkers.

Galuga said she applied to work at Laurents, along with around seven other places on the High Street, because she lived nearby and was accustomed to having a job after working for more than a year as a cashier in a grocery store in Canada.

“In Canada, it’s like really common for young people to work at this age,” she said. “When I got here, I thought— I was like, ‘naturally I’m gonna have a job because I already had one.’”

Initially, Galuga said she meant for the job to be temporary.

“I was thinking about me doing like a summer job,” she said. “But then I liked it so much that I stayed.”

Now, Galuga said she intends to keep the position for as long as possible, either until the end of her Grade 12 year or during her Grade 12 year if she becomes too busy with classes and university applications.

In terms of training, Galuga said there wasn’t much. She said the team “put [her] on the job the first day” as it was busy, just briefing her first how to use the cash register. Over time, however, Galuga said she learned more skills, such as how to use the coffee machine.

Due to the fulfilling work and a positive environment in the deli, Galuga said she enjoys her job.

“I like having something to do, and like, my coworkers are super nice,” she said. “So it’s kind of a fun time. Customers are always nice – I mean 90% of them – and there’s just a really nice atmosphere at the store.”

One of her favorite parts of the job, Galuga said, is making coffees.

“It’s actually quite fun – except okay, to an extent because when there’s like 10 orders at a time, and I’m the only one there and people are, like, yelling for their coffees, I get very stressed,” she said. “But that only happened once, so we’re good.”

In addition, Galuga said complimentary access to food and drinks is another perk of the job.

On the other hand, Galuga said her least favorite aspect of the job is that there are no established breaks. She said when and if she takes a break is determined by the tasks that she needs to complete by a certain time and the number of customers in the store.

To balance her job with school work, Galuga said she does as much homework as possible on days she does not work, makes the most of weekends, sometimes works during lunchtimes and works after her shift when necessary.

Through her job, Galuga said she has experienced more independence since she obtained the job and manages the commitment by herself, as well as improved her time management and customer service skills. She said she has also learned more about British culture by interacting with customers.

“All the customers that come in – well, most of them – they’re British,” she said. “They ask me like where I’m from and then they tell me a bit more about them.”

“When I spend something I can really think of like, ‘Okay, I made this much money by working this many hours. So like, am I ready to trade like this many hours of my life for this object or whatever this thing that I want to buy?’” she said.

Overall, Galuga said she recommends other teens pursue a job, as long as they are aware of the time commitment and responsibilities the job will entail.

“I would definitely recommend it as an experience to have before, before graduating because like, it’s such an important experience I think, and it’s taught me so many skills and it’s just so much fun,” she said. “You just have to know what you’re getting into.”