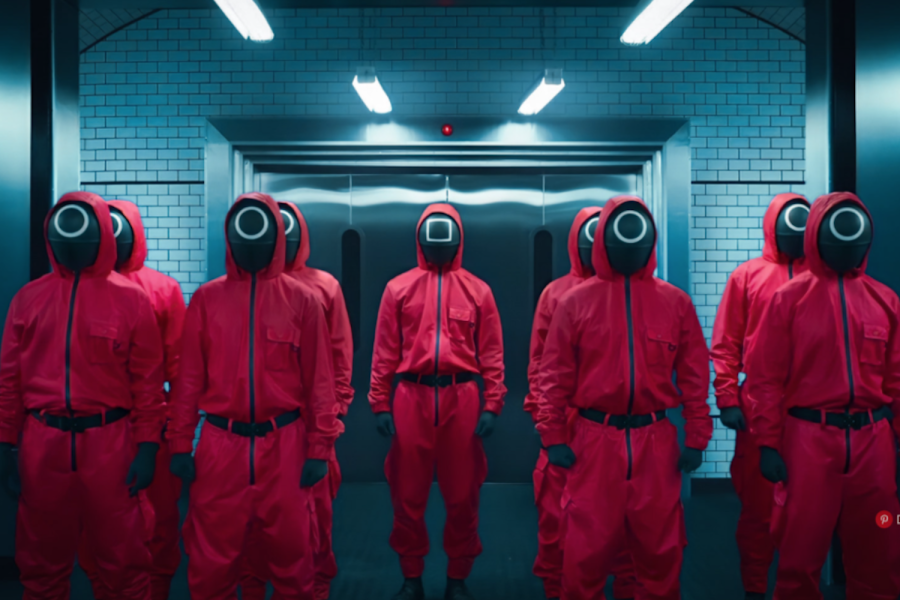 Pink masked soldiers assemble in rows in preparation for one of the many dangerous trials in the Netflix show “Squid Game,” released Sept. 17. The masked soldiers have become a symbol of the acclaimed program on social media platforms following its rapid rise to popularity.

Korean Netflix series “Squid Game” launched Sept. 17 and has taken the world by storm since its release, claiming the title of the largest series ever, per the Guardian. “Squid Game” was the most popular program for four weeks on Netflix U.K. after surpassing 111 million views in the month after it’s debut on the 17th of September 2021, according to the Guardian.

Subsequently, the show garnered a massive presence on social media with the breakout of viral trends and challenges. In fact, #SquidGame on TikTok reached 69.1 billion views and nearly 2 million posts on Instagram, as of Jan. 16.

The plot centers around 456 people in grave financial debt who have been offered to play a mysterious game. The game presents the opportunity to win 45.6 billion South Korean won, or £30 million. Participants do not realize, however, that they signed up for a series of horrifying and deadly games in which they must survive to escape with both the money and their lives.

Amid this gripping fight for the huge prize, “Squid Game” has a golden combination of unending suspense as well as excellent cinematography. Engrossed in the story, both of us watched the entire 10-hour series in one sitting. Combining that with the show’s use of color, it builds a world unique to anything we have ever seen before, making us feel like we were actually catching a glimpse into a secret underground operation.

Even so, be forewarned that the new K-Drama is not designed for the faint of heart. Gore and violence levels are as high as can be for a mainstream show, at times even excessive.

However, the raw – and often bizarre – brutality of the show serves to underline important yet often overlooked problems in the modern world. In particular, the show delves into wealth inequality and lack of philanthropy.

When we further explored the show’s morals, we discovered it mainly revolves around the notion that the lives of the poor are often worse than the death games themselves. As a result, the game’s participants are willing to take drastic measures such as partaking in the Squid Game for even a miniscule chance of escaping their circumstances.

Furthermore, “Squid Game” brilliantly depicts society’s disdain for the poor in the form of its mysterious masked antagonists, “VIPs,” who view the games for their enjoyment and bet on each of the contenders. Their presence in the show begs the question whether we – as viewers – are represented by them, also deriving entertainment from watching protagonists undergo deadly challenges.

What is most valuable to learn from the VIPs, however, is that a widespread lack of care for the less fortunate serves as justification for their actions. Similar to Squid Game onlookers, many of us viewers live privileged and comfortable lives, disregarding those who have less than us.

Our lack of empathy stems from never having been in the same situations, hence we do not fully comprehend the scale of poverty depicted. We then tend to generalize marginalized groups instead of developing an understanding of their individual situations.

A central appeal of “Squid Game” is how it facilitates connection with and empathy toward the protagonists while drawing attention to the socioeconomic divide that has been largely hidden in the background of recent political discussions.

A brutal yet simple story upon first glance, the deep moral questions “Squid Game” raises challenge its viewers to reconsider their outlook toward the less fortunate. If you have not already watched the show and can tolerate moderate amounts of gore, “Squid Game” is ultimately well worth a watch.