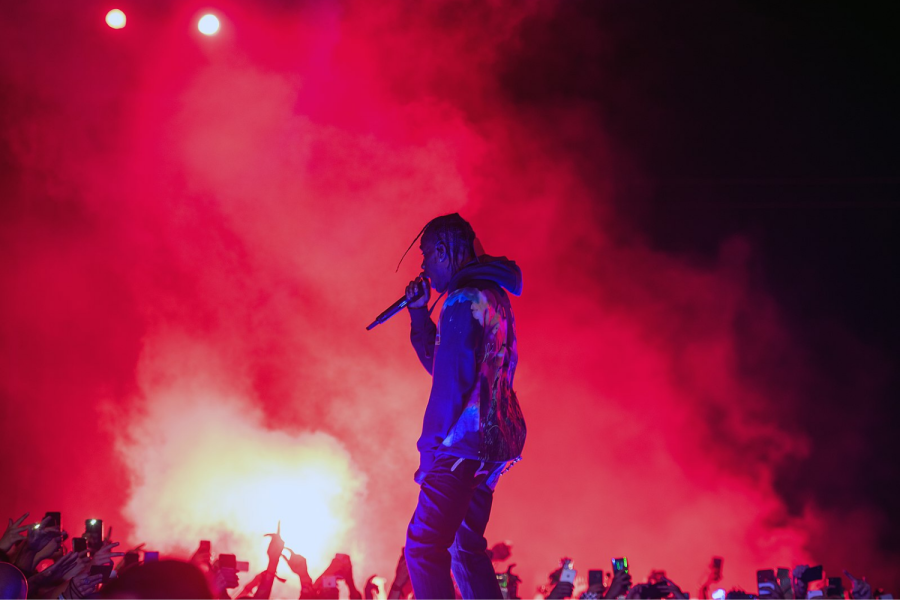 Travis Scott performs at the Openair Frauenfeld festival in Switzerland in 2019. Scott’s Astroworld Festival, held from Nov. 5-7, 2021, resulted in mortalities and injuries, emphasizing the inadequacy of current concert safety measures.

Many millions across the globe enjoy the live music industry, contributing approximately $12 billion in concert revenue to the U.S. economy in 2021, per Statista. Yet, there has been a recent surge in concert tragedies, namely live music performances in which casualties occur.

One incident the media has publicized is the Astroworld Festival, an annual concert. This past year, the festival was held by Travis Scott in Houston, Texas from Nov. 5-7, 2021, where it quickly became fatal with 10 civilian deaths and hundreds of injuries, per The New York Times.

Students reflect on how the Astroworld Festival tragedy has influenced their views regarding concert security, artists’ responsibilities and the music industry.

Layla Khatiblou (’25) said she lived in Houston prior to the Astroworld tragedy and still communicates with friends who have lost loved ones due to the event.

“It’s pretty devastating to hear that this has happened because normally Astro Fest happens every year and it’s an exciting event,” Khatiblou said. “It’s brought the Houston community together because they want to take action now.”

Luke Martinez (’23), who also lived in Houston and has visited NRG Park where the Astroworld Festival took place, said it was shocking to think he had visited the same stadium where others died.

Martinez said the Astroworld Festival lacked appropriate security and medical resources, which he said primarily accounts for the burgeoning number of concert casualties.

“They were just really understaffed in terms of the equipment they had, so there was really no preparation,” Martinez said.

In addition, Sage Saunders (’24) said she has attended numerous concerts over the years and the limitation of concert performances due to COVID-19 restrictions also contributed to recent crowding and violence.

“Artists have prioritized safety and COVID restrictions, especially those that are required, and that’s why concerts are so overcrowded now,” Saunders said. “Everyone wants to go and see the artists that they didn’t get to see for two years.”

Even so, Khatiblou said it is the performer’s responsibility to ensure their audience upholds safety expectations, which she said caused her to question Scott’s integrity.

“I’ve lost a little respect for Travis Scott since it seemed he didn’t stop it,” Khatiblou said. “He should have stopped it in time or he should have noticed that something was wrong.”

Martinez said although Scott cannot regulate his audience’s actions, he has a duty as a live artist to prepare for plans to go awry based on his fans’ dispositions.

“He can’t control all the behaviors of his fans,” Martinez said. “Not just with him, but with any performer, they should have a knowledge of how their fans tend to behave and that should be taken into account when planning a concert.”

Saunders said caution is necessary when determining culpability for a concert fatality as rumors surrounding individuals’ intentions spread quickly on social media platforms. However, Saunders said the artist is ultimately responsible for the safety of their fans when performing.

Likewise, Martinez said artists’ logistics teams should ensure every live performance is organized with enough “space and resources for security guards and medics.”

Ultimately, Khatiblou said everyone involved in the live music industry ought to begin taking preventative measures to ensure that the safety of a performer’s audience is prioritized. She said this way fans can enjoy live music without the fear of casualties akin to those that occurred at the Astroworld Festival.

“I hope that others are taking notes on this and being aware that this shouldn’t happen,” Khatiblou said. “They need to be aware of spacing and numbers of people coming to a place so that this doesn’t happen in other communities or cities elsewhere in the world.”