Students, faculty evaluate whether Omicron could shift COVID-19 to endemic 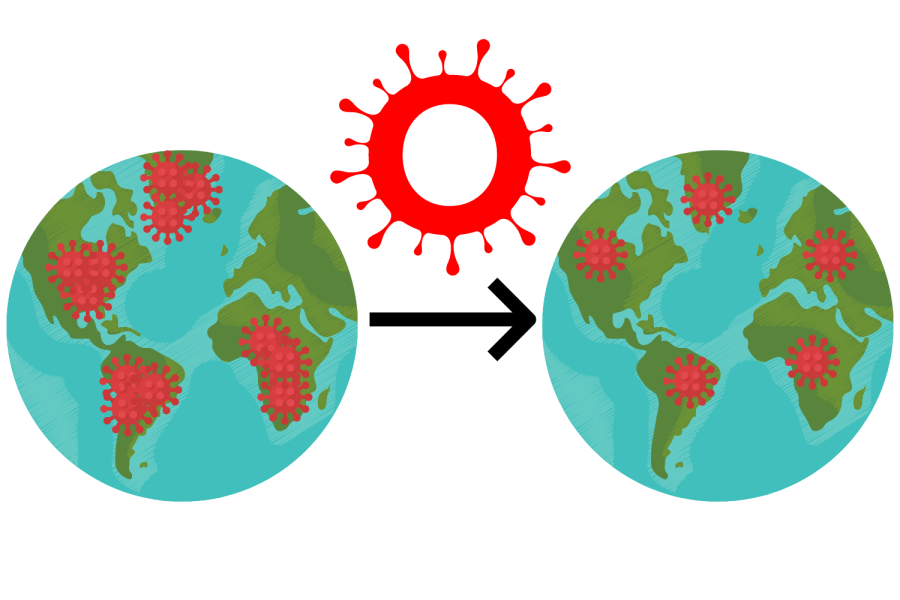 Because of the Omicron variant’s high contraction rates but comparatively low level of severity, health experts claim that COVID-19 may turn from a pandemic into an endemic. Students and faculty assess these claims and whether governments around the world should lift restrictions as a result.

Science Teacher Corinne Morgan said it is difficult to come to a conclusion as to why the hospitalization rate is lower given that a higher rate of vaccinations may be a contributing factor.

“Some scientists do believe it’s not quite as detrimental to human health, and we aren’t seeing the rate of death from COVID that we were seeing previously,” she said. “But we also don’t know how much of that is attributable to previous infections or vaccinations.”

According to CNN, an endemic-level disease remains present but does not problematically affect a population given that people have built immunity. Since Omicron is causing fewer hospitalizations and deaths while creating more immunity in the global population, experts in the science community are hopeful that the variant is moving the pandemic closer to an endemic.

Morgan said the pandemic will inevitably become endemic, although it is not guaranteed to reach that point this year.

“With the amount of resources we have put into treating it and vaccinating against it, we will get it to a point where it just becomes daily but not something to the point that it’s hindering our population,” she said.

Likewise, Luke Baxter (’23) said Omicron is following a similar trend to other viruses. He said he agrees the pandemic will continue to be omnipresent across the world.

“It’s generally true that over time viruses tend to go from not very infectious but quite deadly to not that deadly and quite infectious,” he said. “COVID is not going to go away at any point in the near future, but it will become more infectious and less deadly over time.”

Additionally, Priya Shah (’22) said she is unsure when the pandemic will reach the endemic stage due to the unpredictability of future variants.

“If there is another variant, we won’t know if we are going to be in that endemic stage or if the pandemic is going to continue a bit longer,” she said. “I’m hoping that the Omicron variant will bring us closer to the endemic stage so all of us don’t have to worry about the strength of another variant.”

However, Morgan said it is advantageous for viruses to mutate to become more infectious and less deadly, which would lead the pandemic situation to improve in the future.

“For a virus, something that’s beneficial to it is that it can reproduce without killing its host,” she said. “Ideally, it wants to get to the point where it can spread as much as it possibly can without actually killing people, like we see with the cold or the flu.”

According to CNN, several governments are treating the situation as if the pandemic has already become endemic. According to The Guardian, despite 113,628 new COVID-19 cases being reported on Christmas day, the U.K. Government decided not to impose new restrictions before 2022. The government did not believe further restrictions were necessary since hospitalization rates in the U.K. were still manageable for the NHS.

Shah said although lifting restrictions will probably not work now, as cases have increased when restrictions have been lifted in the past, she thinks it may be possible in the future.

“Dropping the restrictions right now might not be the best idea because we have seen the consequences of that,” she said. “But I do think there might be an opportunity to drop the restrictions later on, which could be a bit easier on our community.”

Meanwhile, Baxter said decisions surrounding COVID-19 restrictions in the U.K. should be made in accordance with hospitalization rates. In general, he said that, for Omicron waves, “not going into strict lockdowns is a good idea.”

When trying to reach an endemic in all parts of the world, Baxter said it is important for governments of wealthier countries to aid the vaccine distribution of developing countries.

“For countries not as wealthy to the U.K., it’s much easier for their health systems to be overrun by a wave of COVID because they wouldn’t be as developed and they likely have less vaccine prevalence,” he said. “In seeking to get to a worldwide endemic, it would be important for countries like the U.K. to help with vaccination.”