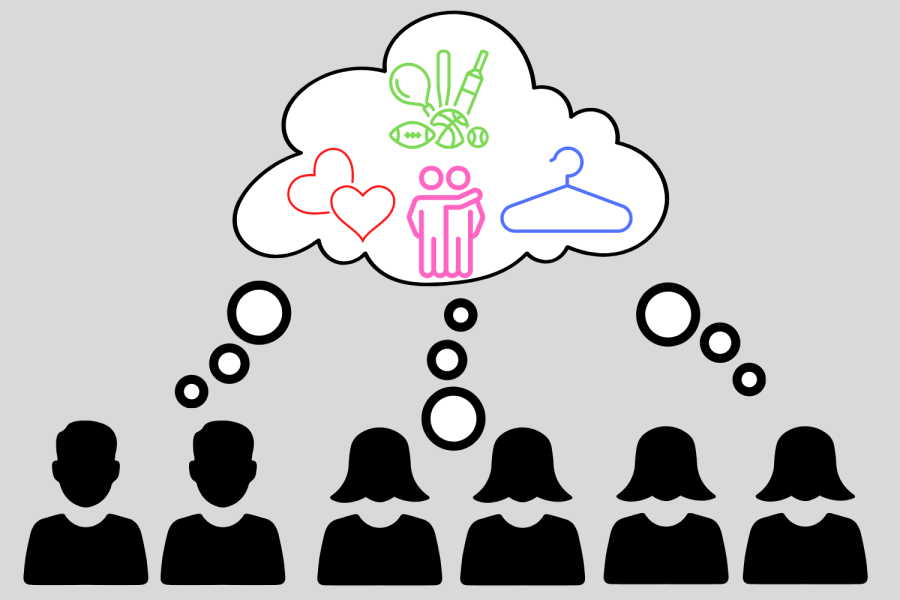 There are many twin sets throughout the school community who have both shared and different character traits. The Okpoyo (’23), Kettler (’24) and Cerrell (’24) twins reflect on their personalities, interests and favorite memories together.

From pretending to be each other to helping one another, twins share a unique bond and experience unknown to those in the twin-less world.

Among the High School student body, there are many sets of twins, all of whom have had different experiences at school and beyond. Both identical and fraternal sets of twins share insight on their relationships with one another as well as how they are viewed in society.

Claire and Quinn Kettler (’24) are identical twins. Claire said they have many friends, extracurricular activities and classes in common. She said their shared interests include swimming, computer science, math and Model United Nations.

Quinn said she and Claire often develop shared passions when they participate in new activities together.

“Sometimes if one of us is willing to try something, then the other would join them, and it usually ends up we both enjoy it,” she said.

Meanwhile, fraternal twins Alex and Andrew Okpoyo (’23) said while they both enjoy sports and socializing, they possess different personality traits.

Furthermore, Andrew said he considers Alex to be more responsible, which leads him to seek Alex’s advice in certain situations.

“If something happens, I’ll look to him,” he said. “Not for an answer, but I’ll just want to hear his opinion, because he’s maturer than me.”

Given their different interests, Chase said the stereotype about twins having identical personalities and behaviors is inaccurate.

Claire said, in addition to experiencing this stereotype, people often mistake her for Quinn as well. Claire said she has become so used to people mistaking her for Quinn that she is no longer bothered by it.

“It’s happened for like 15 years. I’ve gotten used to it but sometimes it can be annoying,” she said. “I’m Claire, but other times I just respond to Quinn.”

In addition, Josie said comparison between twins bothers her as well. She said this causes competition where each twin feels the need to perform as well as the other.

“If one twin is good at something, it sets the standard for how the other twin should do, so I think falling short of that is pretty difficult,” she said. “Then, you’re pressured to be just as good as that person in that certain activity.”

Andrew also said despite not looking the same, he is often mixed up with Alex, especially by kids. It happens often when they coach football; Alex and Andrew both coach for United Dragons FC.

“It’s weird because we never really looked the same throughout our entire lives, but they would get us mixed up if they don’t know us well enough,” he said. “If they only saw us once or twice but they knew we had a twin, they would call us the wrong name by accident.”

Alex said that he and Andrew have a six-year-old brother, Jackson Okpoyo (’33), as well. He said their brother has a completely different relationship with them because there are certain topics they are unable to talk about as a result of the age difference.

Chase said she and Josie also have an older brother, Sal Cerrell (’21), but said twins have closer relationships than those of regular siblings. She said the fact that she and Josie are in the same age group helps them understand each other and allows them to have a better connection.

“I understand that some age differences can be different between siblings and that’s kind of what distinguishes you and it makes you not best friends,” she said. “We’re in the exact same phase of life so we really understand one another, and I feel like that’s what helps us get along.”

To add to this, Josie said she is able to understand what Chase is going through and recognize her emotions easily, which other family members may not be able to do.

“[Being a twin] is kind of like knowing someone inside out,” she said. “Even my parents sometimes don’t know why Chase is feeling the way she’s feeling, and I could read it inside out.”

Chase said when Sal left for college, she and Josie “were both really sad.” However, she said Josie helped her endure the hardship because they could empathize with each other.

“Because we understood what we were going through, I had someone to lean on,” Chase said. “It helped me get through things.”