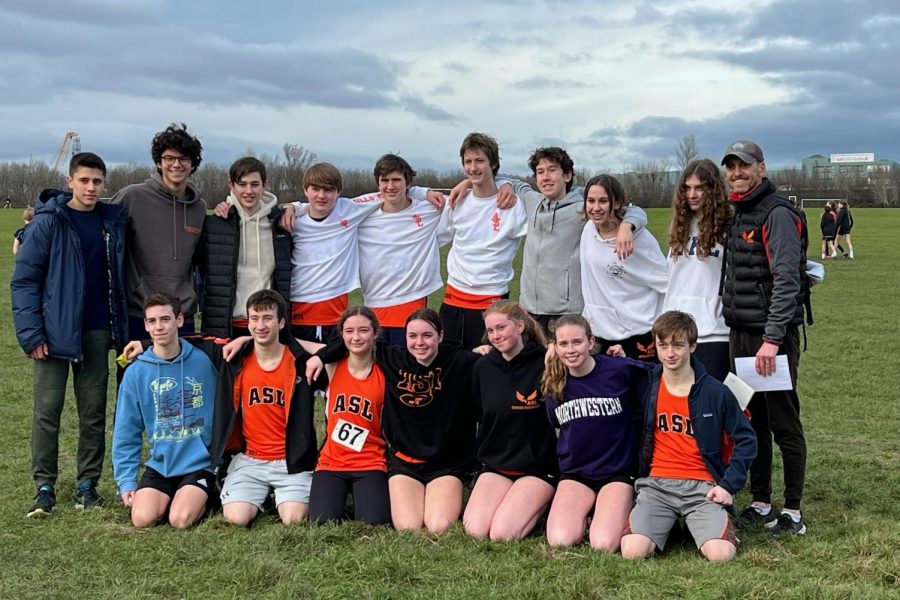 Members of the Running Club pose for a group picture following their races in the London Schools Championships at Wormwood Scrubs Feb. 2. This was the first year the team competed in the event.

Between past cross country and track seasons, student-athletes have organized unofficial running practices during the off-season. However, there were never any official workout plans or even races.

However, after hearing feedback from both parents and students about wanting more training, Grade 3 Teacher Phil Tiller, who coaches the cross country and track and field teams, said he decided to take matters into his own hands. He created the Running Club during the break between the fall and spring sports seasons.

“I met with Mr. Farmer, and he was really great and supportive about starting something that’s kind of official, but not like an attendance thing,” he said. “I just wanted to be a place where, particularly kids that don’t have another sport during this season, to train and keep fit during the off-season.”

Alex Rizzo (’22), who was a part of the unofficial practices during the off-season, said this new running club has attracted more students and allowed for more productive workouts.

“We’ve had kind of similar stuff before, but it was mostly organized by kids, and the attendance wasn’t too great,” he said. “This year is different because Mr. Tiller organized it, and he has a big spreadsheet of all the workouts we’re doing each day, and then obviously, we have meets now, so attendance is a lot higher.”

Ryan Kushman (’24) said he really appreciates the running club as it is preparing him for track and field season.

“Because I don’t participate in cross country during the off-season, this running club is perfect for me to get in shape for track season,” he said.

Tiller said another motivation for starting this club was to encourage running together and competing following multiple COVID-19-induced lockdowns.

“One of the big things for me was that there was such a positive outlook for people and a mental health aspect that people were just feeling kind of relieved to do something normal and be together,” he said. “I really wanted to emphasize and keep that element of community, which is partly why I started this club.”

The Running Club participated in their first race, the London Schools Athletic Association Cross Country Championships, in Wormwood Scrubs Feb. 2. This was the first race where ASL competed against other English schools other than international schools during the off-season. The race distances ranged from 3.5 to 6.5 kilometers.

Rizzo said he enjoyed competing against other schools and felt that, overall, individuals did pretty well.

“These are people that we’ve never really seen before because it’s all the British schools, and this is when they’re cross country season is, so we’re kind of joining in on some of their meets which is exciting,” he said. “A lot of people got personal bests which is really good.”

Similarly, Tiller said he is really happy to be able to compete with English schools during the off-season.

“I just thought, ‘this is great’ because then even though it’s not our season, at least we can compete against more than Hillingdon, Egham, and Cobham,” he said. “This allows for new kids to race against, look up to, try to beat, and just gives us more opportunities.”

Looking toward the future, Tiller has already coordinated other meets. The team plans to head to Radley College to race against 20 English schools in a 2-mile relay race Feb. 8. With all 20 schools included, there will be a total of 86 four-person relay teams, according to Tiller.

“I’ve put together four teams – one girls team and three boys teams – and each team will have four runners,” he said. “Each runner will run two miles through the woods with a baton and then make the handoff.”

Rizzo said he is excited for the relay race and other races to come.

“I am looking forward to this relay,” he said. “It has been really fun to continue running and competing with others even during the off-season.”