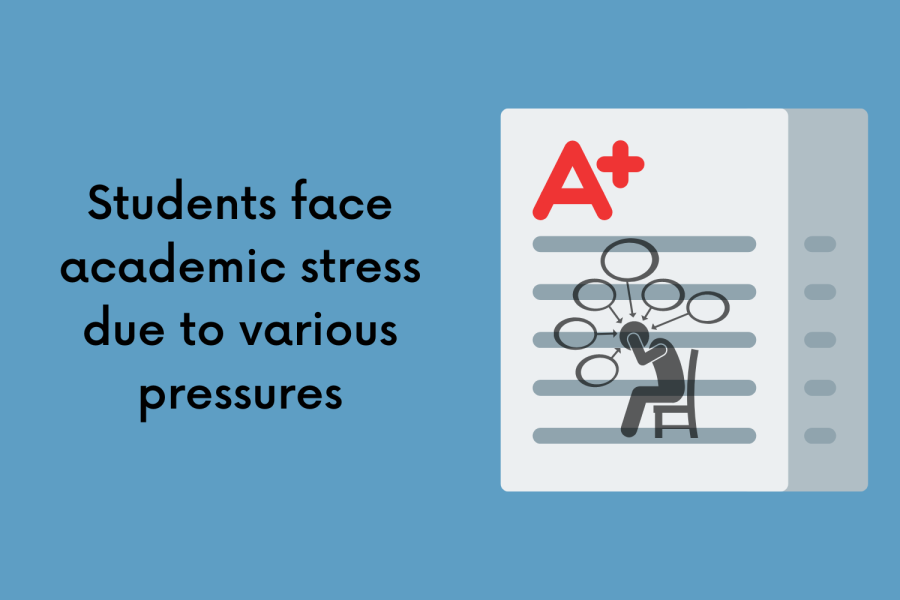 Students share their experiences with academic pressure and the factors that motivate them to succeed academically.

It’s midnight, and Hadassah Olakanpo (’23) has been working nonstop for hours. Her eyelids feel heavy, but there is still a heap of untouched homework awaiting her. Consequently, the next morning Olakanpo is sleep deprived and feels foggy-brained in class, making it challenging for her to understand the material, which only adds to the work she will have to complete in the early hours of the morning once again.

Olakanpo said this poisonous cycle is her everyday reality and is one similar to the routines of most High School students as “people are definitely hard workers at this school.”

Echoing Olakanpo, Catherine Burns (’25) said the workload leaves no opportunity to catch up if one falls behind, and studying efficiently for tests is difficult when there are multiple within a short period of time.

“If you don’t do it the day it’s assigned, it starts to pile up, especially over the weekend,” Burns said. “Yet, there can be so many tests during such a small time period to study for.”

“My internal pressure derives from how I frame my responsibilities and the outcomes,” Erinc said. “It has definitely been directly from the class – not from peers, not from the administration, but my own engagement with the class.”

Yet, Arthur Sadrian (’23) said there are various external factors that increase the academic strain he feels to perform well in an educational environment.

“The solidity of my report card, for instance, can really bring me to terms with what I need to study,” Sadrian said. “At the same time, there’s just the internal pressure of like, ‘Am I doing well in this class?’ especially during the middle of the year when you can sometimes put unfounded pressure upon yourself even if you’re doing fine.”

Although Olakanpo said she feels internal academic pressure, the motivation to be high-achieving originates from expectations her parents have set for her.

“I want to do well, but I feel like that has been placed on me by my parents who always expect the best from me and want me to succeed,” Olakanpo said.

Additionally, Sadrian said many students in the High School come from ambitious families, which often results in parents setting high expectations for their children.

“A lot of parents at ASL have succeeded in life and therefore want their kids to do the same,” Sadrian said. “A lot of their philosophy is if the good work starts in high school, you can really succeed up the line.”

As the eldest child, Burns said there is added pressure from her parents to set a strong academic example for her younger siblings.

“Because I’m the oldest in my family, I feel like there’s a lot of pressure on me to do well so that my siblings can do well also,” Burns said.

In addition to the internal and familial pressures surrounding academia, Erinc said he has felt social pressure from the student body to act disinterested in his schoolwork and to prioritize social events over studying.

“Your interest and your talents towards these more specific areas of interest, I think I felt an implicit pressure to sort of suppress that and suppress my expression to my peers in order to seem cool or fit in,” Erinc said. “Sometimes intellectual curiosity can be a reason to have a target on your back.”

On the other hand, Sadrian said there is also an expectation among students to do well academically, thereby creating a double standard as students are also not meant to spend excessive time doing homework or revising for tests.

“There’s a stigma around getting bad grades, and nobody ever wants to be the person who doesn’t do well. Nobody wants to stand out as the bad student,” Sadrian said. “So everyone tries really hard and that environment can sometimes become toxic when it’s so competitive.”

Furthermore, Burns said although the school does not have an inherently competitive nature, when she overhears someone talking about getting straight As, she feels an indirect pressure to do better. She said she finds working in this environment “utterly draining.”

Meanwhile, Olakanpo said she notices High School students compete with themselves as opposed to against one another. She said students push themselves to become the best they can; however, this ambition often leads to them accumulating a lot of stress surrounding their school work.

Ultimately, Sadrian said despite the trust and confidentiality one may feel around their friends, discussing one another’s grades still negatively alters one’s mindset and forces students to measure their academic worth against others’.

“When you’re in your friend group, people often talk about grades because everyone sort of trusts each other,” Sadrian said. “But at the same time, it can breed this sort of toxic environment where it doesn’t become about what you learned or how far you’ve come, it becomes about what your grade is.”

STEM vs. the humanities

According to Olakanpo, there is a separation between how students view success in STEM classes compared to the humanities.

“People who are better at maths and science and STEM subjects are viewed as smarter,” Olakanpo said. “I don’t hear that kind of praise about humanities subjects that I do about STEM subjects.”

Similarly, Erinc said he notices students who are more well-rounded or have a higher GPA but are more focused on humanities classes are less likely to be considered intelligent than a student who excels in STEM classes.

“People don’t give that same praise to people at the school that I know are doing fantastic things with literature, like their journalism, or their paintings or their visual arts interest,” Erinc said.

Sadrian said part of the reason students disregard the humanities as academically rigorous is because there are fewer opportunities to take advanced classes, which can leave humanities-based students feeling unprepared to handle a rigorous schedule.

“You can start to take higher-level [STEM] courses as early as 10th grade,” Sadrian said. “If you do humanities, that can sometimes make you feel like you’re a little bit behind and, of course, causes stress and thus, academic pressure.”

“It makes you appreciate the value of curiosity and the subsequent learning and accumulation that happens,” Erinc said. “Instead of being worried about a test, once you start bantering with teachers on a one-on-one level, it becomes more of a positive force to understand the material better.”

Likewise, Olakanpo said fostering connections with her teachers by meeting with them outside of class time to go over the course material has been crucial for cultivating her engagement during lessons.

“I noticed myself wanting to do better in class because I have a relationship with the teacher compared to a subject where I’m taught by someone who I don’t really know that well or I just don’t have any connection with,” Olakanpo said.

Nonetheless, Sadrian said building relationships with teachers can also lead to academic pressure as one may feel a greater responsibility not to disappoint their teachers.

“Your teachers want you to succeed,” Sadrian said. “Especially if you develop a connection with your teachers, you sort of feel an internal pressure to succeed for them.”

“Sometimes we muddy the existing scale,” Erinc said. “It doesn’t matter if you’re extending, progressing, whatever. In the end, it’s going to result in a letter grade. They’re trying to frame the process as a more holistic approach, but in the end, you still have the stick waiting for you.”

Thus, Erinc said the administration should endeavor to view the grading system from the perspective of its students in order to more effectively take action to reduce academic pressure.

“They need to relate to the students’ supposed irrational desire to do better and get a better grade in the class,” Erinc said. “The administration needs to engage with the students on a more personal level and try to understand how the dynamics cause pressure.”

Moreover, as a representative on the Student Council, Olakanpo said she has discussed giving students a day off just to focus on well-being, thereby providing them with an opportunity to “re-energize.” She said officially designating students a few mental health days each semester will help normalize prioritizing mental health within the community.

Moving forward, Sadrian said he hopes more of the student body recognizes they are not expected to perform flawlessly on every assessment.

“We all need to take a step back and know it’s okay to get a B,” Sadrian said. “It’s okay to slip up a couple of times, and I think the students need to understand that more than anything.”