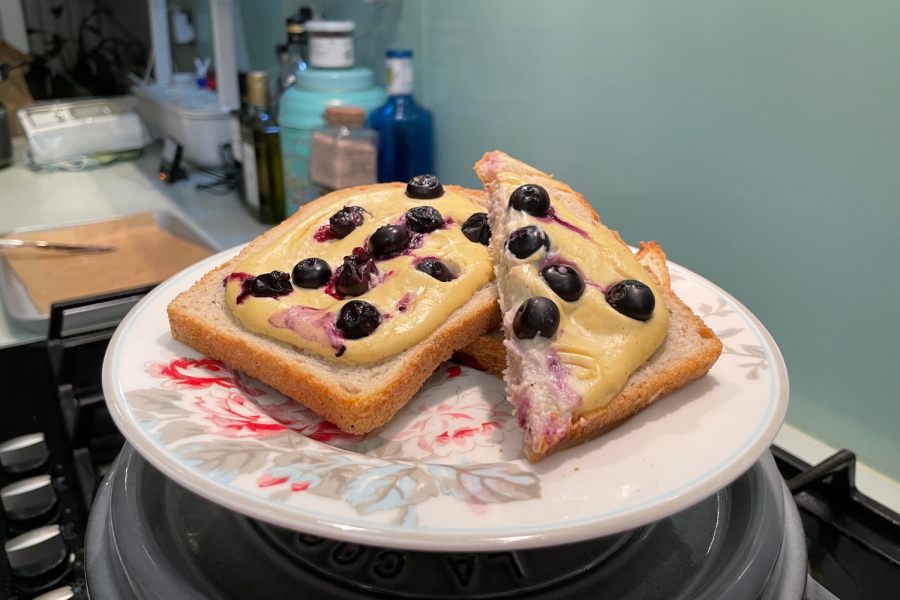 Yogurt: a breakfast, pastry and dessert? Yogurt toast has been the internet’s latest food obsession.

Feast or Flop is back! I wish I could accompany the statement of my return with “better than ever,” but the inspiration for this recipe came from the depths of despair, desolation and disease. My isolation period was spent mindlessly scrolling through a messed-up Instagram algorithm: self-depriving memes, outfits I will never have the motivation nor budget to wear and, of course, recipes upon recipes upon recipes. One recurring recipe was these strange toasts that looked somewhere between a breakfast, pastry and a dessert. Naturally, I had to test it out.

Below, you can find a list of the ingredients as well as the instructions I followed:

Combine yogurt, egg, cinnamon, maple syrup and vanilla
Indent wells into middle of bread slices with back of spoon or fingers
Spoon custard mix into wells
Bake for 12-15 minutes at 180°C (or until custard sets)

*You can substitute the yogurt for a non-dairy alternative.

To arrive at the final verdict, I will be assessing the recipe based on three criteria: accessibility, difficulty and taste.

In terms of accessibility, you could essentially reduce this to three ingredients using an egg, yogurt and bread. That said, I don’t know how much I would recommend this as a simplified, 18th century-esque recipe. It was nice to have a zing of flavor through the additional spices, such as cinnamon, and include customizable fruit, too. Many variations can be made based on preference, so overall, the dish gets a thumbs-up.

As you can see from these four-step instructions, this recipe is not difficult, even for an amateur. It’s an almost perfect, no-brainer dish to assemble. I say almost because of my own foolish choice to use sourdough bread, against which I strongly advise. The motivation behind the use of sourdough? Couldn’t tell you. Perhaps it was the only bread I saw on the counter while frantically shuffling through my pantry; or maybe it was simply my affinity for sourdough bread.

Upon reflection, I put too much trust in this bread. What it offered me in return can only be described as a betrayal. As I was attempting to indent the wells, the bread kept springing back up. It didn’t matter whether I used the back of a spoon or the tips of my fingers – she had already made up her stubborn little mind. As a result, the custard was more prone to seeping out of the wells, which didn’t make for a swift clean-up. To avoid this issue, I recommend using a more malleable bread, such as brioche or challah.

Lastly, the most important verdict: taste.

Sourdough bread comes back to haunt me, yet again. The crusty texture and slightly acidic hints did not mesh well with the tangy yogurt. As a result, I found the combination of flavors to be slightly monotonous. Use a sweeter, cakier bread to improve overall taste.

In addition, like every “eco-conscious” modern teen, I have a crippling fear of dairy. Whether this fear justifies my decision to use oat yogurt is debatable. Since oat yogurt has a different composition than regular yogurt, it compromised the smooth texture and cleaner flavor you would get from the regular version. While I don’t entirely dismiss the use of alternative yogurt – especially for dietary reasons – I would instead recommend traditional greek yogurt.

Admittedly, it wasn’t my favorite recipe, but I only have myself to blame. Given that there are very easy fixes, for now, it’s a feast.