The Standard • 4th May 2022 • https://standard.asl.org/20098/features/mary-bracht-illuminates-forgotten-injustice-of-comfort-women-in-white-chrysanthemum/ 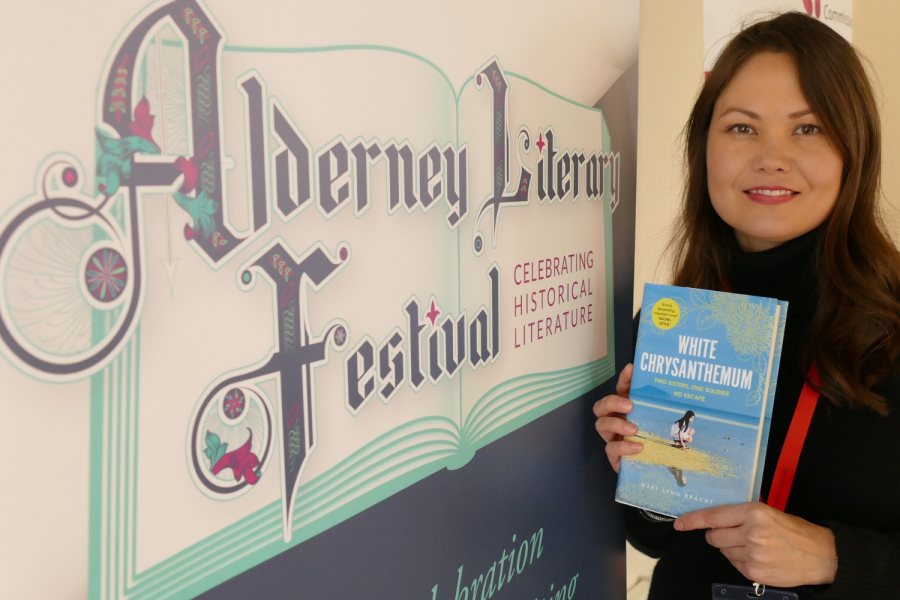 From 1932 to 1945, the Imperial Japanese Army took approximately 200,000 Asian girls and women to live in brothels where they were sexually assaulted by soldiers several times a day, per the Asian Women’s Fund. The victims of this sexual slavery were later coined as “comfort women” because their purpose was to boost soldiers’ morale during World War II, according to E-International Relations.

Mary Bracht (P’24), author of “White Chrysanthemum,” said the comfort women tragedy – which was the central focus of the novel – is one of the world’s most forgotten historical events due to a lack of awareness surrounding the topic.

Bracht said despite her Korean heritage she did not discover the history of comfort women until she planned her first trip to South Korea with her mother after graduating college. While researching for the trip, Bracht said she came across a news piece about the Wednesday protests, a weekly demonstration that recognizes the victims of Japanese war crimes and the injustices they endured.

“I’d never heard of the comfort women – my mother had never spoken of them,” Bracht said. “So to me, it was quite a shock this happened during World War II because, especially during school, we studied all the atrocities that happened and I’d never heard of it.”

Although Bracht said the event did not immediately spark her literary passion, she kept the story in the back of her mind. As time elapsed, Bracht said she came across another entry about the comfort women only to realize that it was the same piece of writing she had read years before.

“Ten years later, I saw what seemed to be the exact same news piece on BBC again,” Bracht said. “It was the same thing. It was just a repeat. It was like nothing had changed in 10 years’ time for the comfort women.”

Bracht said the lack of progress rendered a “deep-seated anger” in her and ultimately compelled the creation of a short fictional story following the life of a comfort woman and her sister titled “Escaping Time.”

“I just thought about what must it feel like to have gone through this experience at a very young age and to have lived in silence for decades,” Bracht said. “And then when you finally do tell your story, nobody cares. The people in power who can make a difference tell you you’re actually someone who wanted to be there, you wanted to be a prostitute.”

“As a woman, I just found that must be one of the most infuriating ways to live in a sense, constantly having to be reminded that you are defined by someone else,” Bracht said.

At the time, Bracht said she was working on her Master of Arts degree in creative writing and decided to share the short story she had written with her peer editing class. She said the story elicited strong reactions from her peers as no one in the group had heard of the comfort women before.

“They couldn’t believe it,” Bracht said. “They all wanted to know ‘Is this a true story? Where did you get this story from?’”

Following the sharing of her short story, Bracht said she reflected on how much time she wanted to dedicate to exploring the historical event. Bracht said because she received her bachelor’s degree in anthropology and psychology as an undergraduate, the obvious next step was to research the subject and any subsequent attempt at justice.

As such, Bracht said she wanted to delve deeper into the topic and turned her short story into a novel for her master’s degree thesis. She said her plans included more thorough research of the comfort women to flesh out each character and ultimately write the bare bones of the story.

In “White Chrysanthemum,” the three main characters consist of Hana, a 16-year-old girl forced into sexual slavery, her younger sister Emi, who escapes abduction by the Imperial Japanese Army and Corporal Morimoto, the soldier responsible for kidnapping Hana.

While writing the novel, Bracht said she published her original short story in her college anthology and later sent it to numerous literary agents, one of whom offered her a contract. Bracht said after she had finished writing the first draft of her novel, she spent a year editing it, two years waiting for it to be sold and another year working on marketing before its release.

Bracht said the most significant struggle she faced writing “White Chrysanthemum” was coping with the heaviness of sexual slavery.

“I found the process very, very difficult, mostly because of the subject matter,” Bracht said. “Writing a lot of the scenes was quite difficult, and I had, not really writer’s block but just writer’s aversion because I knew I was going to have to write another rape scene or a scene in the brothel.”

To combat her “writer’s aversion,” Bracht said she engaged in a warm-up exercise each morning. Bracht said she focused on Emi’s portion of the story as a haenyeo – female Korean divers whose profession is to harvest sea life – as well as the ocean scenes. She said these sections of the book quickly became her favorite to write as they provided breathing space between the darker scenes with Hana.

However, Bracht said another difficulty during the editing process was limiting the scope of her novel due to the fact that “in fiction writing, there are no wrong choices.”

“When you’re writing fiction, all your choices are open and so decision making becomes quite difficult,” Bracht said. “One of the obstacles for me was that I tried to cram everything in.”

Consequently, Bracht said a third of the draft was omitted while working with her publishers because too many ideas competed for space. Bracht said she chalks up the abundance of content to her love for research and learning about new subject matters.

Her debut novel “White Chrysanthemum” was ultimately published in 2018. Bracht said raising awareness and providing an opportunity for dialogue about comfort women was the primary hope for the book.

According to Reuters, only 14 of the registered comfort women in South Korea are still alive as of July 4, 2021. Bracht said within a matter of years, there may be no more remaining comfort women, which she said deepens the importance of commemorating their lives to keep their memories alive.

“Learning about them and studying them is quite important,” Bracht said. “Otherwise, they will just be this little byline in history.”