The Standard • 30th May 2022 • https://standard.asl.org/20385/news/texas-school-shooting-spurs-discourse-on-gun-control/ 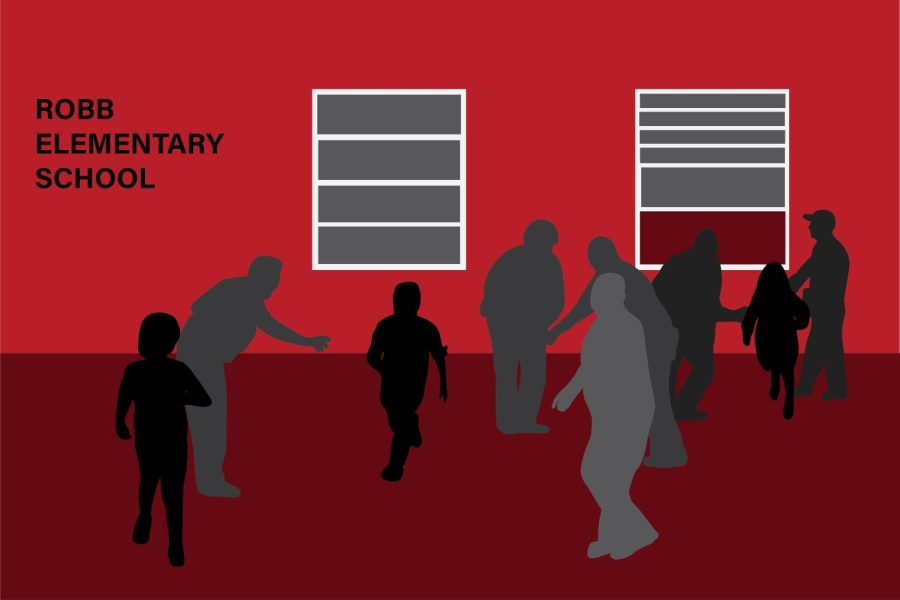 In Texas, two teachers and 19 students died in a school shooting at Robb Elementary School May 24. In response, Head of School Coreen Hester sent a community-wide email May 25, opening up conversations about the impact of the shooting on students, parents and teachers.

Over 1,000 students ages 5 through 18 walk onto the ASL campus every day. When doing so, students file past numerous security guards and bulletproof glass that surrounds the entrance. For 19 students and two teachers in Uvalde, Texas, May 24 was the last day they walked into Robb Elementary School, per The New York Times.

Head of School Coreen Hester said she turns on the news channel BBC Four every morning, which is how she learned about the shooting in Texas. She said she was “heartsick about it,” particularly considering the frequency of school shootings in the U.S. that are less prominent in the U.K.

“We’ve had so many school shootings, we actually have created a term, which, for example, in this country, doesn’t exist,” she said. “It just made me so sad to imagine that we would have another one of these tragedies happening in the U.S.”

Hester sent an email to the school community May 25 acknowledging the shooting’s impact in addition to providing counseling resources. She said she sent out a similar email when she was Head of School years prior in 2014 following the Sandy Hook school shooting, which resulted in 26 deaths.

“It was a sufficiently important event that I should write a note of reassurance to our parents about our safety protocols and also express our solidarity,” she said.

World Languages Teacher Tamara Smith said her initial reaction was to think “not again” as she refreshed her social media page and read the headlines of the shooting at the elementary school.

“I can remember where I was when Columbine happened,” she said. “I was starting out as a new teacher. I can remember being in the classroom when I found out about Sandy Hook in my home state. Every time, it’s just, it’s hard not to react, remembering all the times before.”

“Everyone’s just getting kind of numb to it, you know, and, like, they’re getting tired of debating about it,” she said. “It’s like no one really wants to change anything.”

With the term “school shooting” defined as any attack using a firearm on school property, there have been 288 occurrences in the U.S. this year, per World Population Review. Conversely, there have been none in Great Britain.

Hester said despite having different gun laws and rates of shootings in the U.K., it was important to connect with the community and recognize the impact on its members.

“We’re not in America, but we are the American School and we have enough families who have lived in America or care about what’s happening,” she said.

In addition, Hester said she reviewed safety protocols with the Head of Security May 25 and had “additional conversations” as a precaution for a potential increase in shootings within the U.K.

“You always do worry that somehow the notoriety of that event, the kind of worldwide reporting on it, might make somebody want to do something like a copycat,” she said.

With the school’s direct association to the U.S., Smith said the shooting has made her think about the difference in teaching with regular practice of shooting drills.

“I think of all of my friends who are teachers in the United States, and I think about how they have a whole other component to what it means to be a teacher than I have teaching primarily in Europe,” she said.

Meanwhile, Dowd said teaching kids how to be safe in a shooting is unproductive in attacking the root of the problem.

“It’s so scary how the schools in America are just teaching you how to, like, try and avoid getting shot rather than doing something to prevent people from shooting schools,” she said.

Hester said there is something “universal” about students, teachers and parents when responding to tragedy, no matter which city or country it takes place.

“Parents think, ‘Am I going to drop my child off at school and then not see that child again?’” she said. “So, I think we’re all on the same page about deploring gun violence and especially in schools.”

Like Hester, Smith said it is difficult to avoid contemplating the potential reality of a school shooting, even with the safety measures in place.

“Whenever we hear of another school tragedy, it’s hard to not think of what it would be like to be in that situation,” she said. “But, I feel very safe at ASL, and it makes me more aware of how lucky we are to have such a fantastic security team.”

Smith further said the tragedy at Robb Elementary School could generate momentum for changes that would reduce the number of school shootings, although she said it is difficult to predict the course of a major shift in U.S. laws.

“It’s hard in the moment to know which event is going to end up being a key event that ends up drastically changing the way things are,” she said. “But I certainly hope that this could be an event that could bring about true policy change that could prevent such shootings from happening in the future.”

Despite hoping for policy change, Dowd said she doubts the possibility of stricter gun laws because of the rigidity of Congress and the Second Amendment that protects the right to keep and bear arms.

“These things keep happening like after a shooting happens,” she said. “Everyone says like, never again, but, like, Congress never passes any major laws to actually prevent it from happening again.”

Hester said the issue extends beyond political debate and is a question of life and death for children as they complete their education.

“I think it’s about safety,” she said. “I think it’s about murder. I don’t know too many people who are really going to argue on the positive side of murder, so why would we not want to try to ameliorate a really terrible, terrible pattern of school killings.”

Moving forward, Hester said she would like to see a “democratic process that is non-partisan” working toward the mitigation of school shootings.

“I feel very, very strongly that we must support the democratic processes and the civic and civil discourse that is needed to reduce gun violence in the United States,” she said. “I don’t know personally what that solution is, but I really want to support the processes that would help us.”