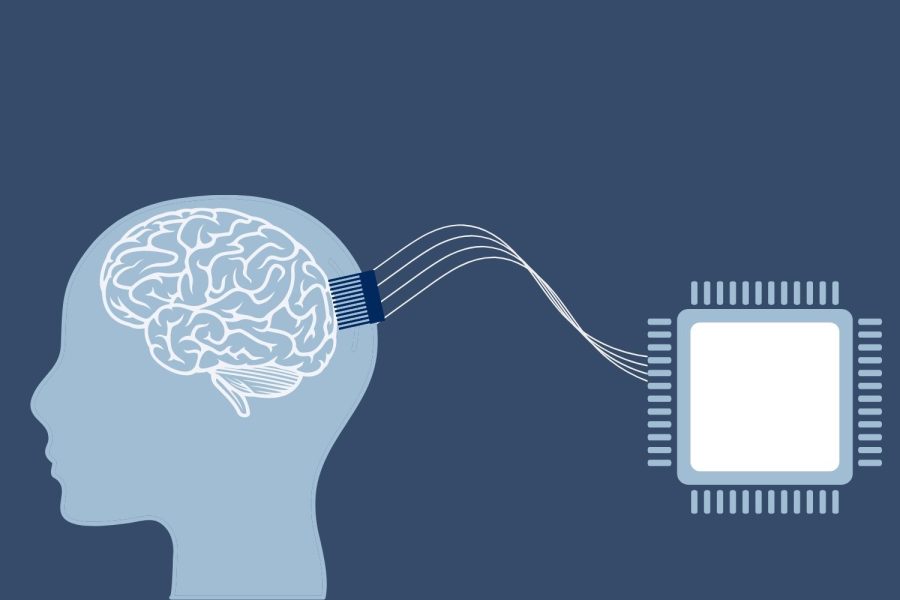 Neuralink, a neurotechnological company, plans to begin its human trials by the end of the year. The company developed a chip implant that is inserted into the brain which allows for the mind to interface directly with a computer.

Neuralink, a neurotechnology company co-founded by Elon Musk and Max Hodak, plans to begin human trials by the end of the year. As defined by Frontiers, neurotechnology is a collection of methods that allow technology to connect directly to the nervous system.

Neuralink is developing a device that can be inserted into the human brain, allowing users to interface directly with a computer which improves the brain’s ability to absorb and store information, per Teslarati.

Owen Humphries (’22) said he is “amazed” by the company’s rapid progress, but said the uniqueness of the technology may hinder the timeliness of its success.

“The level of Neuralink’s integration between technology and humans is truly remarkable,” he said. “It’ll probably take quite a long time to be properly adopted and embraced by a significant portion of the population just because it is so experimental.”

The technology aims to treat Alzheimer’s disease and other neurological disorders by sending and receiving electrical signals from the brain to the chip implanted, known as the Link, according to Neuralink. The Link is used to connect thousands of neurons in the brain and record their function as well as decode neuron activity through computer signals. The device has additional potential to mitigate paralysis by restoring body functionality. It can further expand human interactions by facilitating communication.

According to an online survey conducted by The Standard April 28 to May 5 with 115 student and faculty responses, 58.9% agree with the company’s ambitions and goals to implant devices into human brains. In addition, 36.1% of respondents said Neuralink would surely accomplish its goals, while 47.2% believe the company might attain success.

Nicolas Erdly (’24) said the goals of the company are impressive and could “completely change the face of society.”

On the other hand, Science Teacher Jude Ruff said the concept of “expanding beyond our current abilities” is the driving force behind public excitement surrounding Neuralink, rather than the idea of “helping people with some paralysis regain their abilities.”

Ruff said while she admires the “entrepreneurial spirit” of the company, she is concerned about the accelerated start to the trials.

“I think it needs more thought and discussion,” she said. “It’s very different when you’re putting technology into humans.”

Erdly said the technology can be tested if appropriate safety precautions are taken to minimize harm.

“If they’re sure it causes no actual, like, physical harm to the human being then I don’t see why not,” he said.

According to an article from The Science Times, Neuralink poses several challenges and concerns around basic human dignity and rights if the corporation opens human trials.

Neuralink has also been accused of animal cruelty and brutality from the beginning of its animal trial stages, per The Guardian. A complaint was filed by the U.S. Department of Agriculture and Physicians Committee for Responsible Medicine, claiming the research caused “extreme suffering” in its test subjects.

Humphries said he was shocked by the continuation of the trials despite having a high animal mortality rate.

“When I heard pigs and monkeys were dying or being subjected to poor treatment, it made me really concerned,” he said.

Although Ruff said she has similar concerns around animal safety, she believes prior testing is necessary before human experimentation.

“I don’t think we should be causing harm to any living beings at this moment, and yet, at the same time, if we want to put something into humans, it’s difficult,” she said.

However, Ruff said using animal trials perpetuates the notion that animals are expendable.

“The stability of the corporation is crucial if the trials are set to continue,” she said. “They need their own checks and balances within the company if they want to continue. It sounds like they need to be more robust and comprehensive to other organisms.”

Moreover, Erdly said Neuralink facilitates human access to technology, which “makes people prone to overuse.” Erdly said humans must become further aware of interactions with advanced machinery to ensure it does not overtake lives with the increased convenience.

Furthermore, Humphries said Neuralink presents challenges to educational institutions as traditional teaching would not be required.

“Suddenly kids don’t really need to learn anything because they’ll always be able to look it up,” he said. “I know that we already have so much information available to us on our computers, but one of the valuable things that we’re taught is how to research something, and that won’t be needed anymore.”

Overall, Ruff said although developing technology can be exciting, caution is necessary as Neuralink poses societal challenges that can cause severe damage to the globe.

“We’ve evolved for thousands of years as humans, and I’m very cautious about introducing technology into our bodies, and just what the interactions might be,” she said. “It’s important to question how we carefully and thoroughly test things so that we, as much as we can, cause no harm.”