Graduation for class of 2022 takes place without COVID-19 restrictions 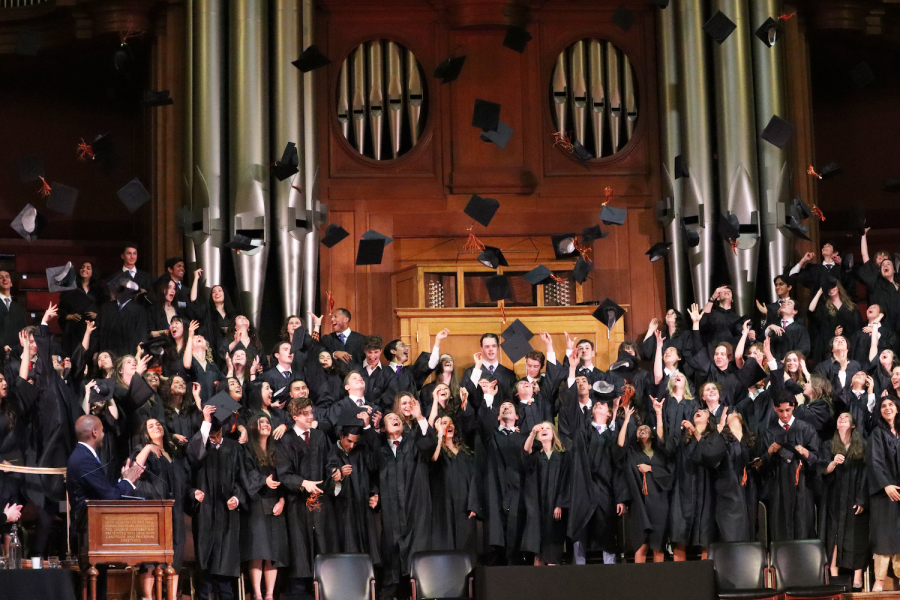 Grade 12 students throw their caps into the air after receiving their diplomas at the graduation ceremony June 11. Graduation, which took place without COVID-19 restrictions at Central Hall Westminster, included speeches, musical performances and the presentation of diplomas.

The graduation ceremony for the class of 2022 took place at Central Hall Westminster June 11. The event included student and faculty speeches, a commencement address, musical performances and the presentation of diplomas. Unlike the graduation during the 2020-21 school year, where students were only allowed to invite up to two guests to abide by social distancing measures, this year’s graduation took place without COVID-19 restrictions.

Adnan Bseisu (’22) said last year’s graduation “didn’t feel like a normal ceremony” and  thus, is grateful that there were no restrictions at this year’s ceremony as it made the event feel more traditional.

“This year it felt much more normal,” he said. “There were pretty much no restrictions, and it was just great to be able to see a ceremony like that and be part of it.”

Due to the lack of COVID-19 restrictions, Bseisu said he was able to invite extended family members and family friends to the ceremony.

“Them being there made a huge difference,” he said. “As much as you love your parents and they’re the first two people you would want to invite, it’s also nice to have a bigger group of people there supporting you.”

Humphries also said he enjoyed the venue and appreciated how effectively the school organized the event.

“The school did an amazing job,” he said. “They gave us an opportunity to practice everything, were very clear about how everything was working and had time to answer our questions.”

Bseisu said the speeches complemented each other well since Brooks’ speech centered around kindness and building a strong community, while his speech focused on nurturing yourself as an individual.

“As well as being kind to others, what I tried to convey is to work on yourself,” he said. “You really want to take care of yourself and make sure that you intellectually challenge yourself but also identify the things that matter to you and then build your life around that.”

Bseisu said since high school graduation is such an important turning point in life, he hopes students will reflect on their plans for the future since that is “a very important part of being an adult and building your own life story.”

Moreover, Juliana Menegakis (’22) performed in both the Concert Choir and Senior String Ensemble at graduation. She said she appreciated the opportunity to perform in front of the school community for the final time, especially given that the choir was unable to perform at last year’s graduation.

“Last year, the choir gathered outside and we sang after the ceremony was over, and it was a nice way to say goodbye to those seniors from last year,” she said. “But, I really appreciated the opportunity to actually sing in the graduation itself.”

Humphries said the graduation ceremony was an ideal way to end the year and bid goodbye to all of his classmates.

“It was a wonderful ceremony and having that opportunity to go through that with my classmates and listen to speeches was a great way to cap off the year,” he said. “It was really nice to be collected in one place to make sure that you weren’t missing anyone in your goodbyes.”

Ultimately, Menegakis said she valued the opportunity to spend time with her class and the wider community for the last time.