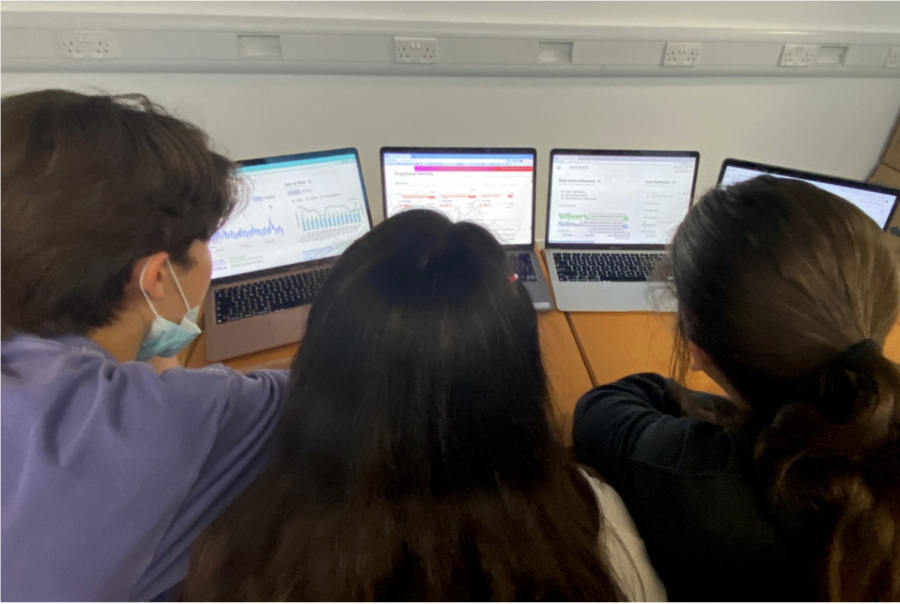 With an increasing global interest in the world of cryptocurrency, students and faculty share their thoughts and experiences around the novel market. Engagement with cryptocurrency in the High School is prevalent, as multiple investigative clubs and individual crypto traders have emerged on campus.

In tandem with a global infatuation with cryptocurrency, students have begun to invest in, research and trade the currency. In fact, two new crypto-centric clubs – the Blockchain Club and Crypto Investment Club – were established this year with 27 members and 44 members, respectively.

In a study conducted by Pew Research Center, 16% of Americans say they have traded or invested in a form of cryptocurrency. Therefore, over 53 million people in the U.S. have intertwined their financial assets with the fate of this nascent market, according to the U.S. Census.

Giovanni Cardini (’25), who is involved with the cryptocurrency market, said he has gone to extreme lengths when day trading cryptocurrency. Day trading is an investing strategy in which one rapidly purchases and sells financial assets in a short increment of time to profit from market fluctuations, per Investors Underground.

“[My friends and I] set alarms three times in the middle of the night just to check the price to make sure we could sell,” he said.

Grade 11 Dean Duncan Pringle, who teaches AP Economics, said he advises students to “be aware of the risks” that ensue major economic bubbles. An economic bubble occurs when the price of a particular item increases significantly beyond its actual value, per Investopedia.

“These bubbles, they pop,” he said. “That’s the problem with something that gets really big really quickly. If it bursts suddenly, your investments are worth nothing.”

“I notice that Gen Z usually gravitates towards investments that bring immediate gratification or results over long-term investments in the stock market,” she said.

According to an article from Time, Generation Z has a lower attention span than older generations. Due to the fluctuating nature of cryptocurrency, Semiz said the generation is subsequently more stimulated by trading.

“The prospect of overnight success – it allows traders to indulge in a financial venture where investing is a fast-paced and interactive experience providing a rush similar to gambling or online gaming,” she said.

Pringle said the difference in dealing with the stock market versus crypto exchange might discourage older individuals who are less tech-savvy.

“There’s a comfort level and a freedom that young people have around things like this,” he said. “They’re not scared of the technology.”

The software behind digital currencies –  namely Ethereum, Bitcoin, Solana, Cardano and DogeCoin – that makes them non-fungible is Blockchain technology. Blockchain functions as a complex ledger that stores records of all transactions to authenticate ownership of the currency, per an article from Forbes This documentation web creates a network of decentralized servers which make cryptocurrencies virtually impossible to counterfeit or split while selling, according to Forbes.

Bassel Ojjeh (‘25), the founder and leader of Blockchain Club, said the future success of the technology is inevitable.

Therefore, Ojjeh said he focuses on educating the members of his club on blockchain by aiding them in researching the technology and hosting guest speakers.

“We’re preparing students to monetize it, monetize the future, essentially, to make money from the changes that are going to happen,” he said.

In contrast, Humphries said he values the possibilities of blockchain beyond its role in cryptocurrencies. He said investors place less emphasis on the “underlying technology” and instead ask themselves, “‘Is this investment going to go up? Am I going to make money on this?’”

Humphries said he invests in certain cryptocurrencies to support the blockchain technology behind the currencies rather than purely to profit from the investment.

Despite the support these investigative clubs provide to their members, Semiz said female students may avoid joining them because of their male-dominated environments.

Semiz said when she attended the Club Fair in the fall, she intended on joining a financial club to learn more about cryptocurrency. However, she said she felt discouraged from joining given the gender imbalance.

“I wanted to join the Investment Club, but I only saw boys at the fair stand,” she said. “The lack of female representation discouraged me from joining.”

Cardini said he chose to invest in cryptocurrency without the support of a club by researching and day trading cryptocurrencies in his free time. He said the volatility of the cryptocurrency market, in comparison to that of the stock market, is notably higher.

According to The New York Stock Exchange, the stock market trading hours are 9:30 a.m. to 4 p.m., giving investors and bankers time to rest and respond to changes that have occurred.

“The crypto market works very differently from the stock market,” he said.  “It’s open 24/7 and money flows through the blockchain very quickly.”

Further, Pringle said as the number of interactions with cryptocurrencies such as Ethereum increases, giving financial power to individuals threatens to take away power from governments.

Pringle said since a lot of government power comes from their ability to print money and regulate the economy, cryptocurrencies play a unique role in today’s evolving political and social environment because they are not government-regulated.

“The threatening piece about Bitcoin and other cryptocurrencies is they’re not backed by governments,” he said. “In fact, governments are somewhat scared.”

Moreover, Semiz said due to cryptocurrency’s nature, it can facilitate financial independence as it presents individuals with an alternative to government-regulated currencies.

“Crypto was created by individuals for individuals,” she said. “It allows anyone to control the economy instead of just the government.”

Ultimately, Semiz said while the cryptocurrency community has issues surrounding diversity, it is an effective way to include a broader demographic in the financial world.

“If the crypto community can overlook their biases, the digital accessibility of crypto makes the currency a great way to break into the financial world without being a professional and normalize taking control over one’s finances,” she said. “It’s a very interesting concept and I am excited to see the change it will make in our society.”