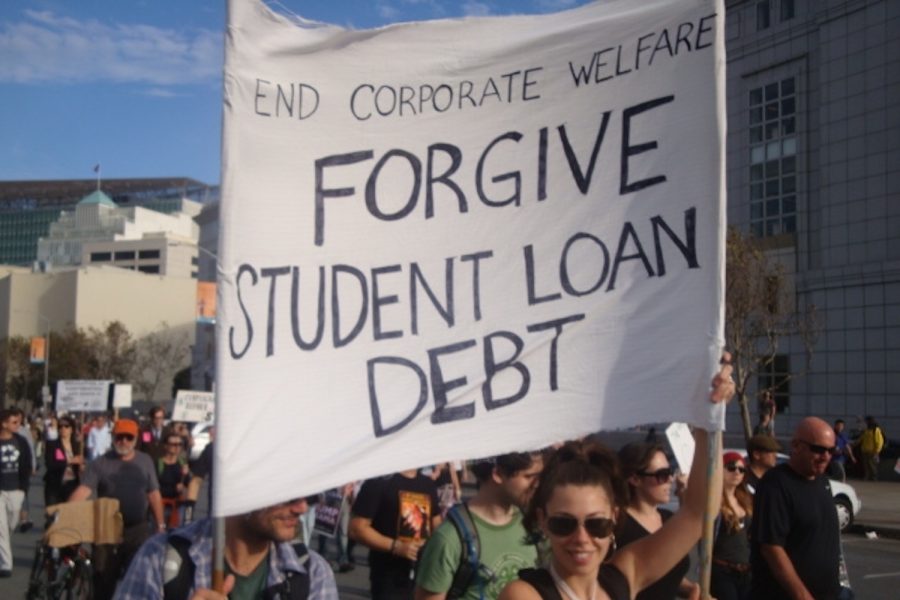 Photo used with permission from jjinsf94115/Flickr

As the cost of higher education continues to rise, students struggle to fund their tuition when completing a college degree. In response, U.S. President Joe Biden recently created a plan to aid students with federal student loan debt.

U.S. President Joe Biden recently announced a plan to relieve up to $20,000 of debt loans for millions of students Aug. 24, according to The New York Times. This announcement, amid inflation and the continuous effects of COVID-19, will massively decrease the total of nearly two trillion dollars in student debt, per The White House. Most importantly, Biden’s plan will boost affordable tuition and completion of college degrees.

During the COVID-19 pandemic, federal student loans were placed on hiatus as funds were instead directed to the millions affected financially by the crisis. In response, the U.S. unemployment rate rose from 3.5% to 14.4% in February 2020 and subsequently, 33% of adults reported a payment decrease, per Pew Research. However, President Biden has now confirmed student loan payments will resume January 2023. To ensure low-income borrowers can budget for their loan payments, a cap of 5% of their discretionary income will subsidize the monthly cost, per The White House.

The benefits of pursuing a bachelor’s degree, which this plan facilitates, are immense. In fact, college graduates are more likely to be employed, earn higher salaries and have increased job security in the workforce, according to an article from Northeastern University. Yet, tuition prices for U.S. colleges continue to surge. Fifteen percent of student debt repayers failed to finish their degree, but continue to pay debt for their uncompleted education, according to The New York Times The majority of these students were unable to resume their education as they could not afford the cost of attendance.

Given the piling debt preventing students from fulfilling degrees, President Biden’s executive plan will become an overwhelming success for the country. At the current rate of 8.5% inflation, citizens are struggling to keep up with the rising cost of living. In addition, the default rate for the repayment of student loans is 16%, according to The White House.

Defaulting on student loans means one could have a portion of their salary stripped, lower credit scores and jeopardize Social Security retirement benefits, per CNBC.

Despite contrary views, the beneficiaries from the plan are not in the high income bracket of earners. Nearly 90% of the benefits associated with debt cancellation will be directed to individuals earning less than $75,000 annually, per The White House.

Pell Grant recipients, for example, will receive up to $20,000 for their student loans. These recipients typically are comprised of students requiring exceptional financial aid, according to The Washington Post. Most Pell Grant recipients’ families earn under $30,000 annually and a large proportion of them are Black, per The New York Times. Thus, the racial equity gap will narrow by supporting students of color with student debt relief.

Nevertheless, to implement a long-term and sustainable solution, legislatures should reduce the price of college tuition. The College for All Act proposed by Bernie Sanders would make public colleges and minority-serving institutions free for all students whose families earn under $125,000 annually, per CNBC.

Biden’s plan is a good start for debt repayers, but attaining Sander’s plan would limit student debt, allowing individuals to attend college without the pressure of repaying the tuition they struggle to afford.

Ultimately, 20 million students will be relieved of debt once the plan is set in action, per Bloomberg. President Biden’s plan will advance racial equality, help those in a cost of living crisis and most importantly, enable students to achieve a college degree to boost their job security.