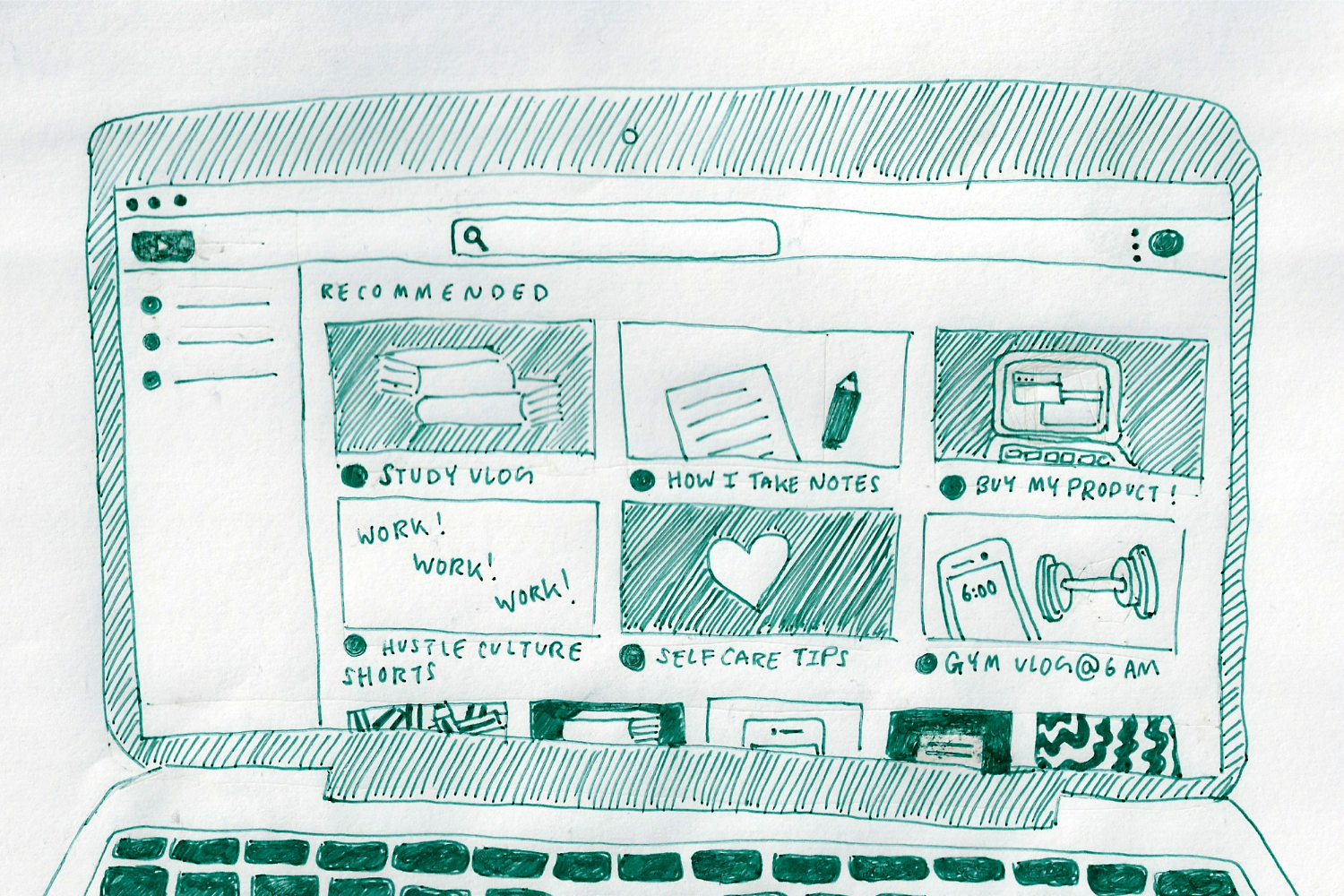 The productivity content-creating community is increasingly active on YouTube and several other social media platforms. Posts on social media can promote positive ideas of balance and wellness, in addition to perpetuating controversial concepts such as hustle culture. (Eva Marriott-Fabre)

The productivity content-creating community is increasingly active on YouTube and several other social media platforms. Posts on social media can promote positive ideas of balance and wellness, in addition to perpetuating controversial concepts such as hustle culture.

The productivity content-creating community is active on YouTube and several other social media platforms. Posts on social media can promote positive ideas of balance and wellness, in addition to perpetuating controversial concepts such as hustle culture.

When browsing the YouTube homepage, one may see tutorials on how to take aesthetic notes, advice for applying to universities and vlogs detailing a “productive day.” Meanwhile, users scroll through Instagram advertisements for productivity-related products, self-care reminders or advice on ways to maximize time.

On which social media platforms have you seen content related to productivity?
Infogram

Sophia DuBose (’26) said she stumbled across the productivity community on YouTube when looking for advice on how to complete homework more effectively. She said she discovered videos on how to balance personal and work life and tutorials on how to create university resumes.

DuBose said the productivity community has several sub-communities, an example being the intersection between productivity and aesthetics.

“For students, I know that it’s important – and I do this at work – to remind kids to work smarter, not harder,” she said. “I like those kinds of posts.”

Similarly, ElSaddic Abd Saddic (’23) said he frequently sees Instagram advertisements for websites and apps designed by “someone wanting to make a difference about how people are organized and how people can be more productive.”

Gus Bhatia (’25) said one of the positive aspects of the productivity community on social media is its motivation in becoming successful.

“It does serve as a reminder for a lot of people,” he said. “That’s also up to you if you want to take the advice or if you don’t want to, but I do think that I found it helpful in the past.”

Cruz said social media provides a platform to communicate tips and tricks in addition to positive reminders creating a healthy relationship with productivity. She said she likes coming across reminders prompting followers “doing your best is always the best” and “you don’t have to follow what everybody else is doing.”

Abd Saddic said personalized advertisements influenced him to buy a timetable, which he said helped balance his schedule.

“I’ve hung it up on my wall,” he said. “It’s made my life more easy to write down what I’m doing on what days to know when I have free time.”

I have applied productivity advice or study methods learned from social media to my own life at least once.
Infogram

While he said there are benefits of having a community on social media sharing productivity-related content, Bhatia said it can often be “staged” and “unrealistic.” He said while many influencers do not live an idealistic lifestyle, social media can show otherwise.

“It’s impossible to lead a perfect life,” he said. “Although, obviously, nobody who makes these kinds of videos does, they certainly kind of present it in a way or that kind of reports that they do.”

Likewise, Cruz said the abundance of productivity content perpetuates insecurity when comparing themselves to others on platforms, even while the community emphasizes the importance of being yourself.

“When you… send a picture of like, ‘Oh, this is how I did this,’ you’re giving like a model for whoever’s looking at it,” she said. “If the person that’s looking at it doesn’t meet that model, or live up to that standard, then they feel like ‘Oh, I didn’t do that well.’”

Cruz said social media puts pressure on teenagers to fit a mold, and thus, she said “everybody needs to find their own way.”

Abd Saddic said many influencers spread the message that “the harder you work or the longer you work, the more you’ll receive.” However, he said working harder does not necessarily yield better results given that people can take different amounts of time to complete tasks.

According to Monster, hustle culture is “ the mentality that one must work all day every day in pursuit of their professional goals.”

“The version of work hard in terms of hustle culture is ‘work, work, work,’” he said. “Like there’s no end to what you’re doing.”

On the other hand, Bhatia said hustle culture contains more positive aspects than negative as it encourages people to work hard.

“The general objective of hustle culture is very much a positive one,” he said. “It’s encouraging younger people to work on their lives, to work harder to create a better life for themselves and to improve themselves.”

Hustle culture perpetuates a toxic relationship with oneself and work.
Infogram

Even so, Bhatia said hustle culture becomes toxic when pushed to the extreme.

DuBose said several hustle culture influencers perpetuate the notion that merited individuals require wealthy and accomplished company, which she said is inconsiderate to those who are struggling financially.

“Often I’ve seen videos saying, like, ‘The most successful people have successful friends,’” she said. “It’ll be like, ‘You have to cut off all your poor friends to be able to do well.’ That’s pretty classist.”

Cruz said hustle culture encourages an imbalance between work life and personal life and many workplaces use this concept to take advantage of their workers.

“Companies have been using that aspect, that kind of like pressure to make people do more for less money,” she said. “If young people or anybody who’s in the workforce has that mentality of like, ‘I gotta hustle, I gotta do all this,’ the only one who’s benefiting is the employer.”

Cruz said she noticed the consequences of hustle culture manifest in a previous work environment, where she said many of her colleagues felt pressured to overwork. She said one colleague felt as if she could not prioritize her health by going home even when feeling unwell, and as a result, went into cardiac arrest.

Abd Saddic said consumerism and product placement is becoming increasingly more prominent and is problematic as younger generations on social media are susceptible to being influenced by advertisements.

“The more that technology advances, the younger the kids are that have it,” he said. “They’re clearly vulnerable to seeing these things and if they get that in their mindset at a young age it’s very hard to change as they grow up.”

Further, DuBose said consumerism plays a major role in aesthetic-centric productivity as many influencers recommend expensive school supplies to their audience. She said while owning basic school supplies is important for school, purchasing over-priced items is not essential for success.

“You have to buy your pens, your pencils, your erasers and your books,” she said. “You don’t have to buy the $100 highlighter.”

Influencers recommending products to enhance productivity perpetuates the notion that consumerism is essential to learning and success.
Infogram

Abd Saddic said while the productivity community is making strides in accommodating different learning styles, content was more exclusive in the past.

“When they started, I’d say definitely it was the case of ‘You have to live exactly like how I’m living to end up being successful,’” he said.

Bhatia said influencers can inadvertently encourage that one schedule fits all.

“You don’t have to go to the gym at 6 a.m.,” he said. “You can go after school, for example, and it’s because as long as you’re going to the gym, that’s the most important thing. For somebody, like, to say that you should wake up at 6 a.m., maybe that works for you, but not for your entire audience.”

DuBose said she used to watch videos with a strong emphasis on taking “pretty notes,” which made her feel excluded as she has a hand disorder and struggled to mimic their writing.

Productivity culture should be kind of, like, one of those things that people who are in supervisory roles should learn about what you promote. Then, it trickles down to their staff.”

Cruz said social media can be utilized as a platform to raise awareness about worker exploitation and concurrently share ideas about how workplaces can promote a healthy work-life balance.

“Productivity culture should be kind of, like, one of those things that people who are in supervisory roles should learn about what you promote,” she said. “Then, it trickles down to their staff.”

On the other hand, Cruz said social media is a “rabbit hole,” and people should not solely rely on external content for productivity.

“Being plugged in all the time, it’s just, it adds another layer of pressure that I don’t think kids need,” she said. “Social media is just kind of generic. It’s not tailored to anyone in particular.”

Ultimately, Abd Saddic said the community should continue to share various ideas of how one can organize and structure their life while introducing a variety of unique ways to be productive and successful.

“I don’t think it should continue promoting exact lifestyles and how people should live because some people end up changing how they live entirely just to be quote-on-quote successful,” he said. “‘Succesful’ is different to everyone.”